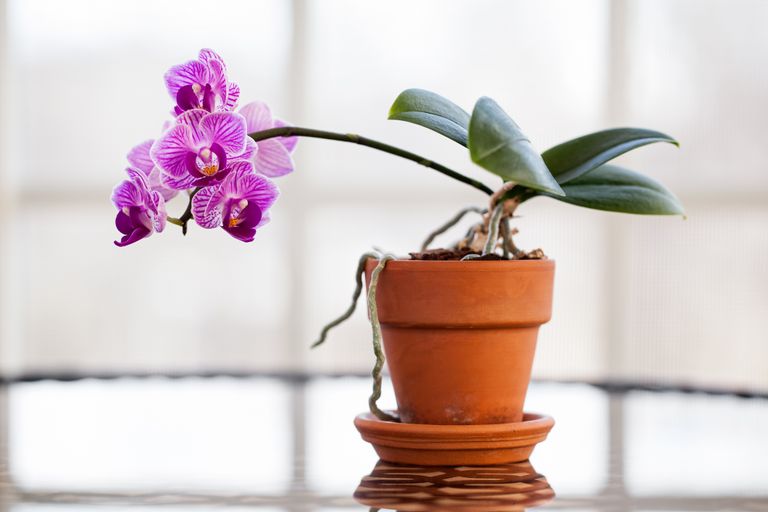 We've all picked up an orchid at Ikea, right? It's one of those amazing house plants that looks sculptural, barely seems to need anything from you, and just lasts and lasts... until it suddenly drops all its flowers and seems to lose the will to live. So how to care for orchids to extend their life – and even revive them?

It's easier than you think. Just follow our guide. Find more house plant care in our advice guide.

How to care for orchids

Your orchid has probably come shallow planted in a pot with what looks like a loose bark mix that shows its roots. The pot might also contain a combination of other materials, such as soil, moss, gravel, sand and Perlite (tiny white stones used to aerate soil).

What's in the pot should, in theory, have been chosen to suit the type of orchid you're growing. So, you might find that a phalaenopsis orchid (which tends to be the one you find in Ikea or the supermarket) has a pot full of loose coarse bark. Another type, cattleyas orchids tend to do better in a medium bark, while young orchids thrive in fine bark. However, it's always worth checking the label, then ensuring that potting substance will suit your plant going forwards.

Where to put orchids

Orchids prefer south- or east-facing spots on a bright windowsill or at least a bright spot. That said, they don't love direct sunlight – indirect is best. Put them anywhere shady or in a dark corner, though and they won't flower properly.

As for room temperature, like humans, orchids prefer the room they're in to be cooler at night than during the day, so don't put them near a storage heater or over a fireplace that's constantly lit in winter, for example. Like most plants, they like consistency.

Orchids also like humidity (another reason not to put them above a fireplace or near a radiator or on a sun-stroke windowsill. However, it does make them perfect plants for bright bathrooms or kitchens.

That said, orchids can work in other rooms – you just have to work a bit hard at keep them healthy, either by misting them daily or by putting the pot in a saucer of water for them to draw on.

How often to water orchids

Contrary to popular opinion, orchids do need watering regularly BUT they should be allowed to dry out between waterings and should never be allowed to sit in water. So, if the soil or bark feels damp, don't be tempted to top it up just because you're watering other plants – give it a few more days.

When and what to feed orchids

Orchids do better when they're being fed weekly or every other week when they're having a growth spurt. You can cut this back to monthly and then every other month once they've reached maturity and seem happy. If the flowers drop off – don't worry, they're dormant not dead.

Do I need to repot orchids?

Yes, ideally every other year, and especially if the flowers suddenly stop appearing.

Do orchids suffer from attacks from pests?

Sometimes your orchid might get an infestation of aphids or mealybugs or scale. Use an insecticidal soap to get rid of them.

What do you do with orchids after the blooms fall off?

It doesn't mean your orchid has died – and treated properly it may come back again better than ever, although you'll have to be patient as this can take some time. The options are to leave the stem as it is, cut it right back to a node or, if the stem starts to go brown or yellow, cut it off at the base of the plant.

Our experience with phalaenopsis is that if you cut the spike between the scar left by the first flower and the last node on the stem, flowers will begin to appear from one of the lower nodes within a couple of months.