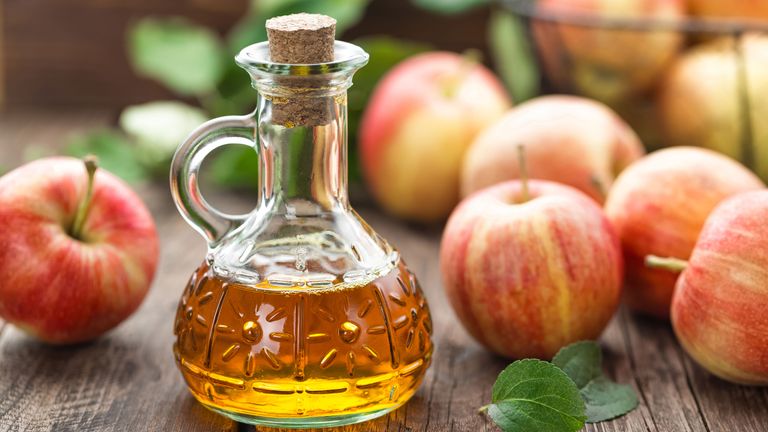 People have been using  apple cider vinegar as a home remedy for centuries. Drinking it diluted in water, using it in food, or even applying it topically to the skin and scalp are all popular uses – but are any of them backed up by science? We look at the evidence, and reveal the best way to use apple cider vinegar.

First things first: drinking too much apple cider vinegar can be bad for you (vinegar is particularly hard on tooth enamel). Along with discussing the correct dosage, we explore the evidence behind the claims that apple cider vinegar has health benefits, so that you can decide for yourself whether this natural remedy is for you.

For more health and beauty advice, visit our hub. Below, you'll find our favourite apple cider vinegar, which is currently half price.

This raw, unpasteurised apple cider vinegar is a bestseller on Amazon. Both EU Organic and USDA certified, it is also Kosher and gluten free. The acidity of this is 5% and can be used alone or in dressings.View Deal

How much apple cider vinegar should you drink?

There is no exact recommended dosage, but anywhere between one to two teaspoons and one to two tablespoons a day is considered safe. One of the best ways to add apple cider vinegar to your diet is by mixing it into your salad dressing, but you can also dilute in a large glass of water (we recommend using a straw if you're planning on drinking it to limit contact with your teeth). It's always best to start with the smallest dosage to help your body get used to it. For maximum efficacy, always choose apple cider vinegar that's organic and unfiltered.

It's important to note, however, that these studies do not claim that apple cider vinegar can dramatically reduce your weight on its own. What seems to be the case is that supplementing an otherwise effective weight loss strategy with apple cider vinegar will improve results, but it won't have an effect without adjusting your nutrition and exercise levels at the same time. And, of course, it may be that people who start drinking it, may also be looking at other ways to live more healthily.

This is another health benefit of apple cider vinegar supported by solid scientific research. A study published in Diabetes Care in 2004 showed that taking apple cider vinegar after a high-carbohydrate meal improved insulin sensitivity with people with insulin resistance. As such, apple cider vinegar may be particularly beneficial for people with diabetes – but as always, you should continue to monitor your health carefully and make changes as necessary. See more on the downsides, below.

There is some evidence that apple cider vinegar improves heart health by lowering cholesterol, but the studies were performed on rats, which doesn't necessarily prove the same link in humans. It is unlikely to do any harm, though. See the downsides, below.

No – this is the one health claim that hasn't been supported by any scientific research, and all the evidence is purely anecdotal. It may be that applying apple cider vinegar topically to the skin may help some types of acne because it's astringent and antibacterial, but there are many other skincare ingredients that have a proven efficacy against acne (e.g. salicylic acid) that you could try first.

There is some evidence that apple cider vinegar does help to balance the PH of your scalp, while many commercially made shampoos have been found to be too alkaline, which can lead to either a dry scalp that flakes and itches, or an oily scalp that's over-compensating for being stripped of its natural oils. Apple cider vinegar is highly acidic, which is actually good for the acid mantle of your scalp. Simply pour a solution of two to five tablespoons of the vinegar in water over your scalp after washing, let sit for a few minutes, then rinse. Try using a milder shampoo to maximise results.

There is some evidence that ACV is anti-bacterial, so if your dandruff is caused by bacteria, then it might help. If the reason for your dandruff is different – a nutritional imbalance, for instance – it's likely you'll need to seek alternative treatments. Trial and error is useful here, and ACV certainly won't do any harm, so long as you used it diluted.

Yes – apple cider vinegar is effective against nail fungal infections, because it has been shown to have mild antibacterial and antiseptic properties. The key to its effectiveness in combating a fungal infection is applying is diligently twice daily until the problem goes away.

Our best bet for fungal infections, though, is tea tree oil: much stronger, so will work quicker.

If you're intrigued by the potential health benefits of apple cider vinegar but aren't sure that drinking it is for you, the best way to use it is actually by incorporating it into your cooking. Salad dressing aside, apple cider vinegar is an excellent (and somewhat underrated) base for pickling vegetables, and a very effective marinating agent for meat, imparting a pleasant sweet and sour flavour and softening the texture. Remember, though, that you always need to dilute the vinegar with water.

Is apple cider vinegar bad for you?

The truth is that it can be if consumed too often or in excessive doses.

Apple cider vinegar is highly acidic, so drinking a lot of it, especially undiluted, can cause damage your tooth enamel, be harsh on your throat, and give you an upset stomach.

And while the studies mentioned above are promising, there's little solid proof as yet to suggest it can help you lose weight. It's also been suggested that drinking too much can cause the body's potassium levels to drop too low and that it can make blood sugar levels harder to control – a must-know for diabetics. Finally, there are suggestions that it may affect how the body processes some medications.

Our advice? If you're well, small, diluted doses, either consumed in drinks or in cooking shouldn't hurt you. However, if you have health issues already, use it, as with anything, with caution and monitor results carefully.

Many people who are part of the online health and wellness community claim that to enjoy maximum efficacy, only apple cider vinegar with 'the mother' – the cloudy substance that is the by-product of vinegar production – should be used. The claim is that there are more of the beneficial nutrients in 'the mother' – however, there are no studies that have proved this. Instead, what has been shown to make a real difference is whether your apple cider vinegar was organically produced or not.