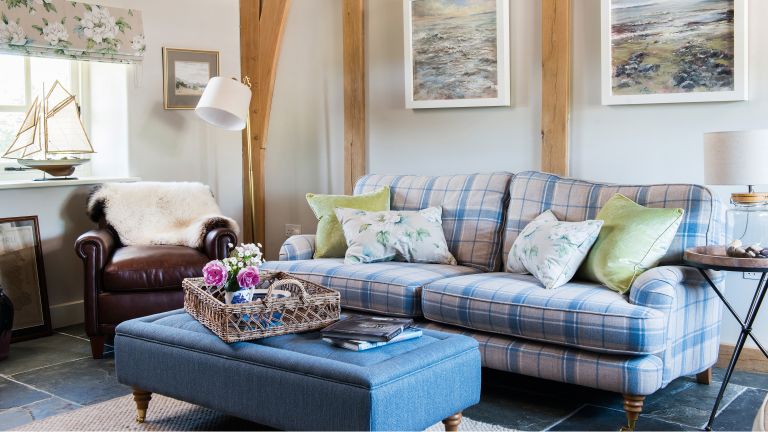 Once a dilapidated cow shed, Soar Cottage is now an elegant period home with a contemporary twist. The work to transform it started in earnest in 2011, when Rosemary Pugh took the plunge to fulfil a lifelong dream.

Find out how she achieved this stunning transformation, then browse more incredible real home transformations. Don't miss out on our guide to extending a house too, for plenty of practical advice and inspiration.

Owner Rosemary Pugh lives here. She used to help her late-husband Eryl on their farm and now manages Soar Cottage as an occasional holiday let (visit cottages.com for details)

Property A two-bedroom thatched cottage in Ceredigion, mid-Wales. The traditional rural Welsh long house was built in the early 1800s as a farmer’s cottage

‘We inherited the farm and its 180 acres in 1969, from my late-husband Eryl’s father,’ she says. ‘We always said that one day we’d rescue the cottage, but farming and raising a family got in the way.

‘Before the cottage was abandoned in the early 1960s, the last known occupants raised eight children here, who used to play in the fields with Eryl. All the locals are amazed at how the cottage looks now; most of them remember it with the orchard, and cows and pigs in the fields.’

The cottage is built in the vernacular style, from local materials with ‘clom’ walls of compacted earth, straw and small stones. The thatch consisted of heather, gorse and earth clods covered with rushes and local straw.

Inside, the layout was that of a typical rural Welsh long house, consisting of a one-room parlour with a bedroom, dairy, cow shed for milking, a calf pen and piggery.

Ten years ago, with the help of local architect Griff Davies, Rosemary received outline planning permission to renovate Soar Cottage and turn it  into a home. Just a few weeks into the project, however, a storm caused chaos as an old apple tree fell onto the thatched roof, causing it to collapse. ‘Due to rainwater seeping in, the walls bulged and went soft,’ recalls Rosemary. ‘Then, to top it all off, the gable-end wall, which is now in the master bedroom, collapsed.’

A year-long delay followed, as the local council insisted on a full investigation to determine the cause of collapse. In the end, it was concluded that the gable wall was unsupported, and clearing and landscaping the area ready for the renovation works had undermined it.

To move forward with the project, Rosemary had to submit a second planning application. The new design had to retain the same floorplan, elevations, and the character of the original Welsh long house, but with an oak-frame sunroom extension, and a smaller addition to create a master en suite, which also incorporated an old tin shed.

When it came to choosing a builder, there was only one man for the job as far as Rosemary was concerned – Owen Evans, who she had known since he was a child. ‘Owen does a lot of local work,’ says Rosemary, ‘so he was familiar with the style of property and the materials needed for an authentic renovation.’

Owen contacted a local specialist firm to supply bespoke oak framework, trusses and beams for the extension. ‘It was pouring with rain when we met Paul Edmonds from Welsh Oak Frame on site. He told me he could make the cottage into “a proper little gem”, and that’s exactly what he did!’ says Rosemary. ‘Three builders lived on site and put the whole oak framework together in just 10 days.’

The roof was insulated next, before the thatchers set to work. They worked tirelessly for five months, and the craftsmanship is clear to see.

‘The thatch is immaculate, one of the best thatched roofs in the area,’ says Rosemary proudly. ‘And it’s not just me who thinks that; most of the locals agree.

‘I did struggle to find traditional timber sash windows to suit the cottage,’ she adds. ‘Thankfully, Griff introduced me to Steven Thomas Joinery, who installed softwood double-glazed windows that finish off the exterior perfectly.’

As the cottage started to take shape, Rosemary decided to call in some expert help to choose furnishings and decor. ‘You can become weighed down with all the decisions you have to make, so having a designer on hand was great,’ says Rosemary, who chose to work with Kay Cullen at the Laura Ashley design service.

‘I’m a huge Laura Ashley fan and had worked with Kay previously at my Georgian house in Aberaeron, when we became such good friends,’ she adds. ‘Kay pulled the whole scheme together and did a spot of furniture upcycling for me, and we even went antique hunting together on her days off.’

With Kay’s input, the finished look is cool, calm and collected, and Rosemary is delighted with how it has turned out. ‘Seeing the cottage finished at the end of a very long journey is such a joy and achievement,’ she says. ‘I love spending time here. The name Soar Cottage actually originates from a story in the Old Testament. It means a place of sanctuary – and that’s exactly what it is to me.’