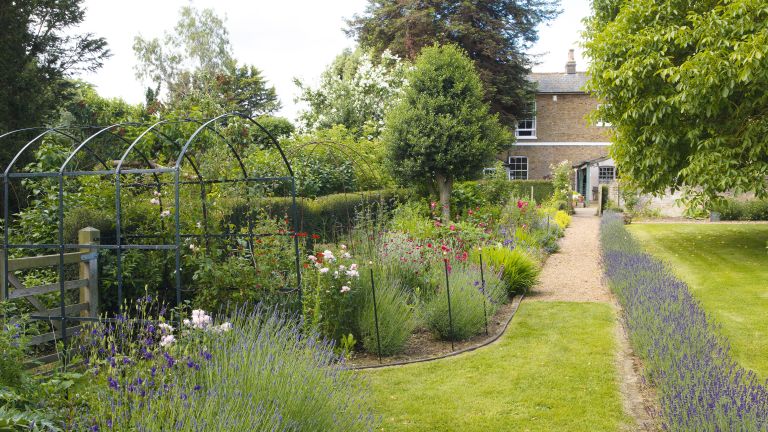 Susie Challen and Marc Beney were both instantly seduced by the garden of this beautiful Victorian villa in a rural area near Rochester in Kent when they discovered it in 2011.

Back then, it was a much different picture from the carefully tended beds and borders it presents today.

With many areas left to grow wild for years, the garden was a jumble of romantic overgrowth. Ivy scrambled across lawns, a large dead oak dominated the south-west skyline, misshapen yews blocked views, and the garden was dotted with a mix of self-sown trees. But Susie and Marc could spot its potential.

There were wonderful original features remaining, too. These included mature specimen trees, meandering paths and steps, varied aspects, and romantically tumbledown Victorian vine and soft fruit houses glimpsed out of the thicket.

‘We were told that the garden was magnificent post war, but it had largely returned to nature when we arrived,’ explains Susie. ‘We have worked unaided to clear and rediscover it, without any plan or pictures from before.’

Read on to find out how they breathed new life into the garden, then find more gardening advice and inspiration.

‘We have since learned what effort is involved to realise even a part of the garden’s potential, but we are continuously rewarded by seeing our plans come to fruition as the seasons pass,’ says Marc.

Wrapping around the house, the sloping, terraced plot is separated into areas, each with its own micro-climate, use and aspect. These include a walled kitchen garden, an old grass tennis court now with a double spiral mown labyrinth, and a yellow and a white garden next to a Victorian pavilion and croquet lawn.

‘We have gradually opened up the garden – which was partially inaccessible and dark with evergreens – to the light, clearing a lot of dominant monoculture and adding variety and productivity, always wanting to try new ideas,’ says Marc.

This is the largest garden the couple has tackled, but with a shared interest in plants their knowledge has accelerated through hands-on experience of digging, clearing, planning and planting.

It was not easy for them to establish what lay underneath the overgrown areas until each was cleared, so the garden has evolved in a piecemeal fashion with no overall plan.

Their initial focus was to re-establish the kitchen garden, all of which remained were two overgrown Victoria plum trees, a glorious walnut tree, a lidless cold frame and a greenhouse that had seen better days.

Today, a mix of climbing roses adorn the walls, blending from pinks to the dark burgundy Rosa ‘Falstaff’.

The fruit harvest offers a wide range, from Mespilus germanica ‘Nottingham’ (medlar) and Morus nigra ‘Chelsea’ (mulberry), to pears, plums and apples, while a four-bed rotation vegetable system supplies produce through the year.

Susie and Marc’s aim is not to be self-sufficient, but rather nurture crops they love and which may be hard to find in the shops, all grown in as natural a way as possible.

Find more advice on how to create your own kitchen garden.

Now known as the yellow and white garden, the area to the south-west of the house has been cleared, levelled and a hand-sown lawn created for the enjoyment of croquet.

It is bordered by a romantic, billowing mix of yellow and white flowers, including foxtail lilies, Achillea ‘Moonshine’ and Salvia sclarea ‘Vatican White’, framed by low box hedging.

Find more planting inspiration from our guide to choosing a colour scheme for your garden.

Across the garden, the palette is considered, with the aim for year-round interest; winter aconites, snowdrops and crocuses, through roses and perennials, to flamboyant dahlias, asters, winter jasmine and holly berries.

‘Colour combinations are important, so there are gradual transformations, such as in the kitchen garden where colours move from light and pale to strong and dark, or the emphasis on strong colours at the front of the house,’ explains Susie.

It’s both cost saving and rewarding to grow new plants from seed for infilling beds and borders. 'We buy a few new packets each year to try out; we also let some plants, such as foxgloves and aquilegias, go to seed and self-sow – although you may need to thin them out as they can take over,' says Susie.

‘When the sun is shining, it feels a wonderful thing to be working in a garden,’ says Marc. ‘We benefit both from looking at the surrounding landscape and the efforts and inspiration of our predecessors.’