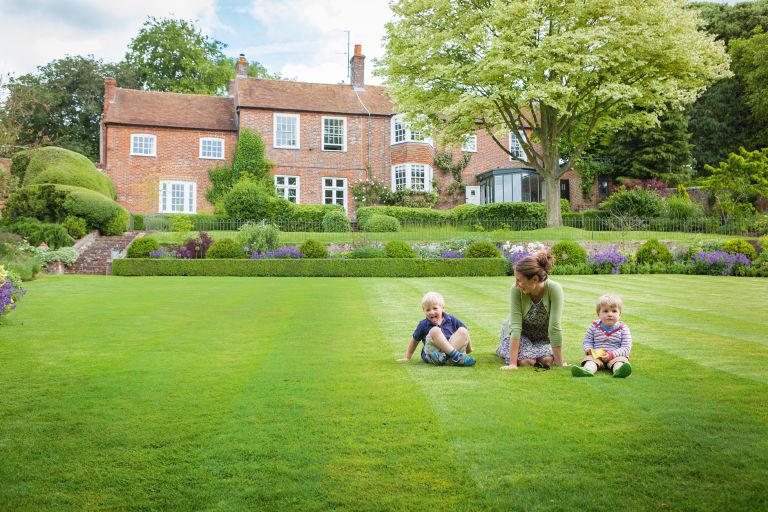 Whether you're looking for inspiration to start your own project or simply want to take a look inside a renovated property to see what's possible, you're almost sure to love Amy and Philip Matthews' sensitive renovation of their Grade II-listed Georgian home.

Looking for even more inspiration? Browse more of our gorgeous real home transformations... Read our guide on renovating a house, too, for more guidance.

Property: A Grade II-listed Georgian house, with Victorian and 20th-century additions, in a village close to Wallingford, Oxfordshire

Layout: Amy and Philip have maintained the existing floorplan of the house, which has four reception rooms, five bedrooms and four bathrooms

Childhood memories of wonderful summers spent outdoors, in the heart of the beautiful rolling Chiltern countryside, prompted Amy Matthews to leave London behind and head to Oxfordshire with her husband Philip to start their hunt for a new family home.

The couple had lived in the capital for a decade, but their property search took on a renewed sense of urgency with the arrival of their first child. With family close by, and easy access to London and Oxford, the Chilterns proved irresistible.

Amy and Philip fell for the characterful, rambling Georgian house immediately. It had a beautiful village setting, its façade was framed by climbing roses and box trees, and the interior was full of original features.

‘It looked absolutely glorious,’ says Amy. ‘We had been for a general nosey around the area and knew parts of it well. I remember thinking how pretty the village was, and then being completely wowed by the house.’

The couple bought the property in January 2011 and moved swiftly to renovate it in just four months. ‘Luckily, we were able to rent a place in the village while the project was ongoing,’ explains Amy. ‘It was ideal, as we were on hand to oversee progress, but the builders didn’t have to work around us, which made the process much quicker.’

Although the house was in good condition when the couple took it on, the renovation work required included new electrics, replumbing, remodelling the bathrooms, redecorating, and childproofing the garden — including removing a pond. ‘There was a lot to do,’ Amy admits, ‘because it’s a big house. But as there was nothing structural to tackle, we were able to move quickly.’

In designing her new home, Amy took her inspiration from the character of the property itself. ‘The architectural detail is charming. It’s a house that’s full of surprises — there are all sorts of old doors and panelling, beautiful original ironmongery, quirky little bookshelves, and plenty of nooks and crannies. It’s also very higgledy-piggledy, with steps everywhere, leading to different levels,’ she says. ‘We were determined to keep as many period features as possible and maintain the integrity of the building, so I considered each room individually.

‘It’s an intriguing house architecturally, too, as it was once two separate buildings,’ she continues. The main house was built in the early-18th century and a link to the neighbouring cottage was added in Victorian times. The property evolved further, with 20th-century additions including a conservatory, which houses the kitchen and dining room, and a pergola.

Interior designer Amy was well equipped to add to the charm of the house. Her mix of vintage, antique and contemporary pieces, along with the elegant proportions and abundance of light within the house, has created a graceful family home. ‘My mother calls it eclectic,’ she says, ‘but, by and large, we’ve stayed traditional — I like furniture and detail that are contemporary to the original house’.

Artworks clearly influence Amy and Philip’s interior design choices, too, and their passion for fine art is in evidence in every room of the house. ‘We both love going to auctions and galleries,’ says Amy, ‘and we never miss the London Original Print Fair, held each year at the Royal Academy, which is a brilliant place to visit if you want to start collecting. We have quite a collection now — we’re running out of wall space!’

Amy’s favourite spot is the living room in the main Georgian part of the house. ‘The large bay window is on the brow of a hill, and is elevated above the garden. Sitting there at the desk, you get the sense that you’re on the bow of a ship’, she says. ‘You can also see what the children are up to, so it’s an ideal lookout point! We use that room a lot as a family, dividing our evenings between it and the children’s playroom.’

The house also has a more formal drawing room, in the Victorian link. It is a beautifully proportioned room with large French windows, and the couple love to host parties in here, where guests can spill out onto the terrace. ‘It’s cosy and friendly — the whole house has that feeling as soon as you walk in: a warm and welcoming vibe,’ says Amy.

Wisely, Amy and Philip have done little to change the timeless exterior appearance of their village home. With just under an acre of land to the rear of the property, the garden sweeps down from the house, which is perched on a small hill.

‘The hill runs down to the cottage, and then into the garden, too,’ Amy explains. ‘Our predecessor designed the landscaping. While we are not naturally green-fingered ourselves, we are learning fast!’

Although the project ran fairly smoothly, Amy says that if they were to start all over again, she and Philip would do certain things differently. ‘We would give more thought to practical matters, such as shower drainage’, she explains. ‘As we didn’t think about the soil-pipe position before we made key decisions, we had to put in a special drain with a pump mechanism, which makes the most dreadful noise every time we turn it on.’

With most of the work out of the way, Amy and Philip’s future plans for the house include a full kitchen remodel. ‘The painted units were inherited from the previous owners. We have made a few minimal changes, such as replacing the flooring, but we are living with it for now as we plan to renovate it eventually,’ says Amy.

Following a very hectic few years, Amy has recently returned to work as an interior designer. So is her own design project now complete? ‘I see a house as an ongoing process’, she says. ‘I don’t think it’s ever completely finished — there is always something to add or take away, as well as tweaking and refining to be done.

‘Our house project came together quickly, along with our three young children, so we really have experienced a total lifestyle change,’ Amy continues. Having made the move as a family, they have discovered that this new way of life suits them perfectly. ‘Everything has slotted into place and we couldn’t be happier,’ she says. ‘I don’t think we could have found a better home for our growing family.’