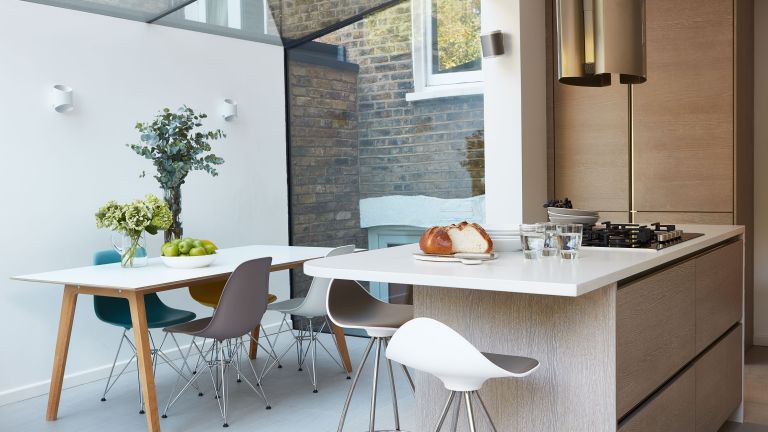 Dreaming of a light-filled kitchen, better suited to family life? Be inspired by this glazed extension in Hackney, and the other kitchen case studies among our real home transformations.

The owners: Sarah Brooks, an actuary, and husband Alastair, an accountant, live here with daughters Isabelle and Elsie
The property: A four-bedroom Edwardian terraced house in Hackney, London.
Project cost: £120,000 (including garden landscaping and the creation of a bathroom upstairs

Sarah Brooks knew the answer to increasing the size of her narrow and draughty kitchen lay in expanding out to the small paved area – where they hid the barbecue and hose pipes – at the side of her family’s terraced house in Hackney.

However, she was loathe to have a brick-built addition that would stop daylight getting to the basement, newly converted into a playroom and home office. Her bold solution was glass, and lots of it.

Architect Peter Lancaric came on board with her daring suggestion and they created a beautiful extension that contrasts with yet complements the Edwardian home it’s now part of.

Sarah explains how she had to fight for the beautiful glass box she envisioned, and how they managed to get the huge glazed panels needed for it in place.

’When we first moved in we had a damp and dank brick cellar, which was the only storage in the house. We dug out quite a bit, and now it is a store and utility with another room at the back, which is a playroom for the girls and a bit of a home office for us.

'Because of the basement, I didn’t want a standard side-return extension, like a lot of my friends had, as it would cut off the light to it and also to the lounge. The motivation for using glass came from not wanting to have a brick wall at the back of the extension.

‘I started looking round at glass designs online. I found Peter Lancaric through a builder doing a small job at the house. We sorted through what I was thinking, he came up with two designs I liked and it went from there.’

‘The old kitchen was basically a galley shape with a row of low units and a few wall cupboards. The only thing we had against one wall was a fridge-freezer because a chimney breast was in the way, so it was limited in terms of space. All the appliances had gone and the units were old.

'We also needed to do something about the insulation and heat as it was draughty and freezing. There were just floorboards with big gaps in between – we took some up and could see soil underneath! And there was big bay window to the side which hadn’t been fitted well.

‘I wanted a kitchen island, tall units and good appliances. It had to look contemporary with big handles and lots of cupboard space, plus I wanted a hob on the island where I could cook.'

‘The house is in a Conservation Area and we had to get planning permission from Hackney local authority for the extension. Then we had to find someone to construct it. One builder we had round actually said “Do you really like that?” I thought, “I’m not working with you if you don’t like the design”.

‘For the frameless panes we went with Cantifix, who are London-based. The roof was originally going to be one piece of glass, but because our house is terraced, we would have needed to hire a crane to get it to the back. Together with the cost of the crane licence, we were looking at another £5,000. The glass salesman suggested we could save money if we went for three panels, which they expertly carried through the house using magnets.'

Read about more fabulous home transformations, and how to achieve them, by subscribing to Real Homes magazine every month. You'll never miss an issue and will save £s

'The renovation started in May and  was finished by October, during which time we had to use the utility room as a makeshift kitchen. Knocking out the chimney breast freed up one wall, so now there are plenty of floor and wall cupboards, and a central island.

‘When we first started this project, I thought it was only going to be about £17,000 or £18,000. But after we took into account the building of it, having the kitchen fitted and getting the garden landscaped because it was a pretty scruffy outlook, that’s when I thought I’d better start a spreadsheet...

‘The kitchen was expensive, but my biggest extravagance was probably the extractor fan over the island. It is a real feature of the room. Peter describes it as “sculptural”.

‘I was quite anxious about it not being cold in here so I asked the builder if the underfloor heating would be powerful enough and he said, “it’ll be really hot”, and the glass company assured me that as well. Now I actually can’t believe how warm it is.'

‘I love all the glazing and the way the view comes in. I even like the look of the frames in the ceiling. I think they pull everything together.

‘Though it’s not a huge extension, it has changed the way we as a family use the space. We spend most of our time here and myself, Alastair and the girls can all hang out when someone is cooking. It is the warmest room in the house now. When we have friends round, we’ll usually spend most of the night in the kitchen.’