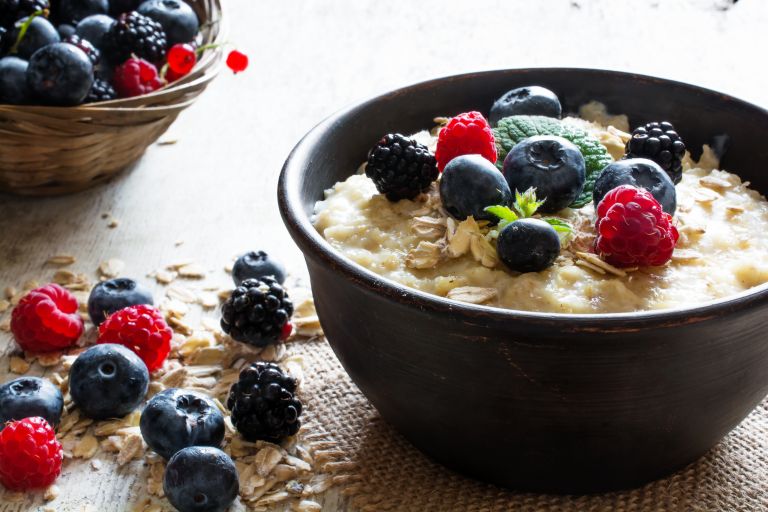 Want to know how to make the perfect porridge? For some of us, porridge is the go-to breakfast for cold mornings. For others, it's a reminder of childhood breakfasts that were, shall we say, not our top choice.

The truth is, though, that breakfast is one of the healthiest breakfast options out there. It will keep your full for longer than most cereals and it's really easy to make more interesting with fresh fruit and cream/plant milk of your choice. Here's how to make the best porridge ever.

How to make porridge

1. Place the oats in a non-stick pan; we prefer milk pans, because it's easier to pour out the porridge into a bowl afterwards.

2. Cover with the milk or water and bring to the boil. You have to watch your porridge – as soon as it's come to a boil, start stirring with a wooden spoon so it doesn't stick. Reduce heat and continue stirring until the porridge is thick but not stodgy. It should still be pourable, just not too runny. The whole process should take about five minutes.

3. Pour into a bowl and pour over the extra milk. For a richer taste, you can also top up with yoghurt or cream. Top with the fruit, jam or honey. Eat immediately.

How to make apple pie porridge

if you’re looking for breakfast ideas to start off your morning, this apple pie porridge should definitely appeal. And, as we found the recipe on the NHS website, you can be sure it’s a healthy choice.

Plus, it's a one-pan recipe, so there’s not much to wash up afterwards, or put into the dishwasher.

1. Add 50g porridge oats, 200ml of semi-skimmed milk and a diced eating apple into a saucepan along with a sprinkling of cinnamon.

2. Heat the mixture until it comes to the boil, stirring continuously. Once it’s come to the boil, turn the heat down and simmer the contents of the pan gently for five minutes, stirring frequently.

3. Put the porridge into a breakfast bowl. You can add another sprinkle of cinnamon to serve, too.

For both porridge newbies and those who are already fans, we’ve discovered a top take on porridge: a porridge recipe that uses the superfood blueberries to pack in extra flavour, fibre and, of course, one of your essential five a day.

1. Add the oats, almond drink, and 75g blueberries to a saucepan. Bring the mixture to the boil, stirring, and simmer for five minutes until thickened. Squash the blueberries with the back of the spoon as you go, so they’re incorporated into the mixture.

2. Put the porridge into a serving bowl. Add almond butter, flaked almonds, seed mix and maple syrup and top with the extra blueberries and other berries.

1. Add the porridge oats, milk, frozen summer fruits and maple syrup to the saucepan, plus a pinch each of salt and cinnamon. Slowly bring the mixture to the boil, stirring, then simmer gently for three to four minutes until thickened.

2. To serve, divide the porridge into two bowls. Top each bowl with half the yoghurt, banana slices, chopped fruit and nuts, and fresh berries. Done!

We told you it was easy.

Not only is it packed full of flavour, but this tasty porridge recipe takes under five minutes to prepare and only calls for a handful of ingredients. Don't have blueberries? Swap them out for whatever you have to hand. So, what's not to love?

To make this delicious honey, blueberry and yoghurt porridge, you will need:

1. Place the three sachets of oats (or regular oats) and the milk together into a microwave-safe bowl, and mix well.

2. Pop into the microwave and cook as per the packet instructions. Or, if you're using regular oats, cook for two or three minutes or until you achieve a thick, creamy texture. Once cooked, stir well and leave to cool and thicken.

3. Once cooled, really mix well to break up, this will take a couple of minutes.

4. Next, add the natural yoghurt, blueberries and muesli and carefully mix together.

6. Spoon into bowls and serve with extra honey.