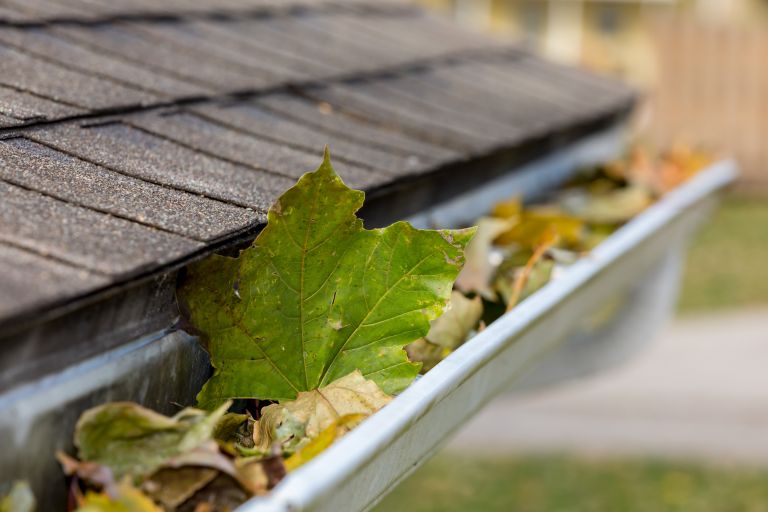 Knowing how to fix guttering and drainpipes is a must for any homeowner. The structural health of your home depends on it – rain needs to be channeled away from a building safely and correctly via well kept house gutters; otherwise, it will saturate solid walls, which will in turn lead to timber decay and beetle infestation.

Worse, when the ground next to the house is allowed to become consistently wet and marshy it can eventually undermine shallow foundations. It is therefore important to know how to spot faults in guttering and downpipes.

Bought a home and need advice on more than how to repair cast iron guttering? Find out more in our ultimate guide to house renovation.

How to tell if guttering is broken

What to look for in damaged house gutters:

How to check your guttering for damage

It is easy to assess the state of rainwater goods and undertake regular maintenance to ensure they work efficiently. This review is best carried out at least once a year, especially in autumn when the trees have shed their leaves.

To judge whether your guttering system is fit for purpose, start at the top of your property and visually follow the route the rainwater takes down to the ground, or on rainy days check for leaks and overflows. To prevent rainwater cascading off roofs, it’s important that the guttering is positioned correctly, and that there are sufficient downpipes to cope with a heavy downpour – at least one downpipe for every 10 metres of wall.

Common faults and defects in guttering

With house gutters, it is essential that the brackets and fixings that attach the guttering to exterior walls are secure and able to withstand heavy seasonal loadings from snow and ice. The general rule is one bracket per metre length of guttering, with support more closely spaced at junctions, such as corners to bay roofs.

Guttering is supposed to slope down, or ‘fall’, slightly towards the downpipe. If there is no significant slope, the water will not flow away and a build-up of sediment may cause overflowing. Too steep, however, and torrents of water will gush past and overshoot. One traditional method that allowed adjustment in situ was the use of special metal ‘rise & fall’ brackets to achieve the correct fall.

Many Georgian and early Victorian townhouses have gutters hidden behind front parapet walls or balustrades at the top of the main walls – the most challenging of all. Some even have secret internal gutters and downpipes running under floors. Being out of sight from street level these tend to be ignored until a serious leak develops. Although replacing a lead lining need not be too difficult, the condition of the timber plate supporting it may not be apparent until the covering is removed – and replacing this can seriously add to the cost.

How to fix guttering

These are the common defects you'll find in house gutters and that you'll need to tackle.

Gutters and downpipes that are blocked by leaves, moss and other debris cause water to spill down the face of the wall or seep into the timber behind the gutter, including the ends of rafters and joists. Water trapped in pipes during cold weather can freeze, resulting in cracks and  splits in the metalwork.

The source of water seepage from downpipes and guttering is not always obvious, so check the back, if necessary using a mirror. Often these areas are difficult to paint, resulting in cast iron rusting.

Joints are a potential weak point in both gutters and downpipes, so ensure they haven’t become disconnected and are leak free. Rusted or missing bolts are often the culprit, along with loose gutter brackets and downpipe fittings.

Where a gutter is clear but water is not running away, the ‘fall’ or angle may be incorrect. A good way to test this is by pouring a bucket of water along the gutter. If the slope is insufficient the water will not flow away, whereas if it’s too steep water will overshoot the house gutters.

A rainwater system should empty into gullies and drains at the base of downpipes so the water flows clear of the building. An easy way to check the guttering system is running freely is by tipping a bucket of water down it.

Cast-iron downpipes and hoppers were traditionally fixed to walls with iron spikes driven into the wall through pairs of cast-iron ‘ears’. Because they are positioned close to the wall this makes decoration difficult, leaving the backs vulnerable to rust. When replacing them it is therefore a good idea to add spacers so they are about a finger’s width out from the wall.

Downpipes normally discharge into a gulley in the ground, which leads to the underground drainage system. Gulleys intercept debris and block smells, rather like traps under sinks. Where downpipes terminate above the gulley, a ‘shoe’ is normally fitted to the bottom of the pipe to help slow and direct the flow.

When they are open in this way, rather than directly connected into the underground drainage system, the downpipes can be inspected and maintained easily, but then leaves and rubbish can accumulate causing blockages, so it is advisable to fit a grille covering over the gulley.

Victorian guttering and downpipes were mostly made of cast iron, which superseded earlier Georgian lead-lined timber box gutters. However, on grander properties lead continued to be used for hoppers – ‘collection boxes’ located at the tops of downpipes – often bearing decorative embossed emblems.

Towards the end of the 19th century there was a short-lived vogue for copper guttering among Arts and Crafts architects, but as an expensive material its use was restricted to the best quality housing.

In recent years the rainwater fittings on many period houses have been thoughtlessly replaced with cheap-looking plastic gutters, often poorly fitted in clashing styles and colours. Only where buildings are listed or located in Conservation Areas is it likely that homeowners will have replaced the old guttering in authentic matching materials.

If your house still has its original cast-iron guttering and rainwater fittings, the best option is to overhaul the existing system. Where replacement is necessary, new factory-painted cast-iron systems are widely available, either curved ‘half-round’ style or wavy-fronted ‘ogee’ – the latter fixed directly to fascia boards rather than using brackets.

Cast iron looks authentic, plus its strength makes it resistant to damage, such as from ladders leant against it. It does, however, weigh a lot, and requires periodic decoration to prevent deterioration through rust. Although dearer than standard plastic fittings from DIY stores, cast-iron fittings have greater longevity, so work out cheaper in the long term.

The next preferred option for period homes is cast aluminium, which looks very similar to traditional cast iron. Although not the cheapest, aluminium is highly durable and also rust proof, so therefore low maintenance, and is considerably lighter than cast iron.

Replacement fittings can be ordered with a powder-coated finish, saving the cost and inconvenience of painting at height. Aluminium guttering is also available in a thinner continuous ‘extruded’ version, which is roll-formed on site, but looks less authentic.

PVC guttering is the cheapest option and also relatively light, making installation easier and quicker. Although it doesn’t suffer from corrosion, plastic is very prone to developing leaks at joints due to expansion and contraction, and older fittings become brittle with age and degrade in sunlight.

It is also a fairly flimsy material and prone to damage. Unlike cast iron, plastic has an unfortunate tendency over time to sag between brackets, which can then affect the alignment, causing discharge problems.

There are two main styles – curved ‘half-round’, and ‘squareline’, both available in a variety of colours. Plastic rarely looks complementary on old buildings. Traditional designs are, however, now available in glass-reinforced polyester, which replicates the texture and style of cast-iron fittings, but has a shorter lifespan.

Keeping cast-iron guttering and downpipes in good condition requires periodic maintenance. Small leaks and loose pipes can usually be repaired fairly easily, but major restoration work is a specialist job because of the need for working at height and manoeuvring awkward lengths of heavy guttering.

Connecting to the drainage system

With new pipework, it is not usually permitted to connect rainwater – referred to as ‘surface water’ or ‘storm water’ – to the main foul drainage system serving bathrooms and kitchens, to avoid overloading public sewers with water that does not need treatment.

Historically, however, Victorian houses in urban areas used ‘combined systems’, so in some cases it may still be acceptable for rainwater to discharge into the sewer system. One clue to this is where you can see that original bathroom waste pipes discharge into the same hopper or gulley that takes the rainwater from the gutter.

Why spring is the most important time to fix gutters

Hear of April showers? If you haven't already been doing it throughout the winter months, early spring is the time to clear your guttering of leaves and debris that would've inevitably accumulated since the autumn clean. Moreover, you may find an abandoned bird's nest that's blocking your gutter. If you find any active bird or squirrel nests in your gutters, the best course of action is to phone up the environmental health department of your council or RSPCA.