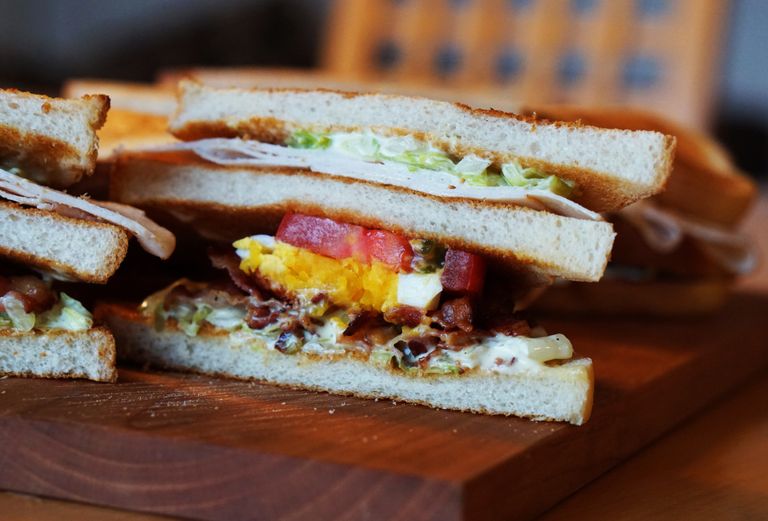 An egg BLT sandwich is, simply put, a taste of perfection when it’s done right. It’s like a whole filling plateful of breakfast in a convenient pick-it-up package.

We do like a culinary classic, which the egg BLT justly claims to be, but that doesn’t mean we’re averse to trying a new take on a recipe. So, when we discovered a recipe from Gordon Ramsay that gives the traditional combo a spicy Cajun kick, we made it... and we liked. Then we added sliced turkey to make it for lunch, too. Scroll down to take a look.

See all our egg recipes on our dedicated page. And if you’re after more recipe ideas and cooking inspiration? You’ll find them on our food hub.

1. White bread? Sourdough? Gordon uses a croissant in his recipe, and we did too. It was a first for us, but more familiar (because we prefer to toast the bread for a BLT). Gordon puts some olive oil into a pan on a high heat, salts the pan, puts the sliced croissant in to brown, then flips it. He soaks up the salt when the croissant is toasted before setting it aside.

2. The b in BLT is for bacon, but Gordon uses ham in his, although he does suggest Canadian bacon as an alternative. It goes into the same pan the croissant did to cook. Gordon adds Old Bay Seasoning as well as pepper, and once it’s done, sets it aside on a paper towel.

3. Gordon then puts both olive oil and butter in the pan, adds more Old Bay, then breaks an egg into the pan. He advises taking the pan off the heat for even cooking, and now adds another sprinkling of Old Bay on top of the frying egg.

4. More spice? You’re on. Gordon gives the mayonnaise for his sarnie a kick by adding Crystal Hot Sauceand, you guessed it, a little more Old Bay, plus a squeeze of lemon.

5. Now Gordon assembles his super sandwich. The lower layer is the bottom of the croissant, topped with some mayonnaise. Next comes lettuce: Gordon’s recommendation is Romaine, which is seasoned with salt. Next Gordon adds slices of tomato, then a slice of Cheddar. More mayo is next, then the ham, then the fried egg. Oh, and he puts a tad more mayo round the egg before topping with the other half of the croissant.

6. Think all that's enough to fill you up? We tried some sliced turkey with it too to make it a real Scooby sandwich. Worked for us a treat...