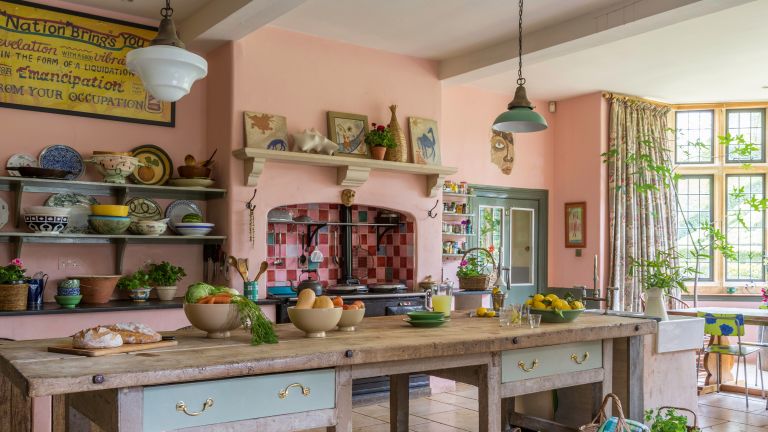 Need inspiration for a period transformation on a grand scale? This unusual home is one of our favourite real home transformations. Read on to find out how its owner embraced its history and used bold colours, strong statement furnishings and some dramatic stone sculptures to bring it up to date.

And don't miss our extension pages for plenty of practical advice and inspiration.

Property Asthall Manor in the Windrush Valley, Oxfordshire, built in the early 1600s in Cotswold stone with many additions over the centuries. It served as a convalescent home during the First World War

What she did Rosie added a front drive, relocated a staircase, added a new bathroom and extended the kitchen. The garden has been landscaped

Looking for somewhere a bit special to turn into a home for herself and two young daughters, Rosie Pearson called off the search when she found Asthall Manor, a solid Cotswold home in rolling, rural Oxfordshire.

It had been home to the infamous Mitford sisters and their parents in the roaring 1920s, and their presence – and the distinctive blue woodwork paint they chose – still makes itself felt around the house.

Although Rosie loved the manor house from the start and says she could picture good things happening here, she admits it wasn't terribly welcoming or cosy, in fact, it was quite the opposite. So once the sale went through that's what she started to put right.

Rosie and her daughters moved into the flat above the ballroom and started to turn the house into something that would work for family life.

There was a lot to do, as Rosie explains: ‘The house was rather stark and foreboding, the garden was overgrown and there wasn’t even a front gate – its reclusive previous owner preferred it that way.

‘Before I even got an architect, I was put onto Julian and Isabel Bannerman, known for their garden designs but brilliant with interiors too, and they helped me come up with a plan, along with architect Robert Franklin.’

‘I was all for leaving the garden until after we’d finished the house, but Isabel and Julian convinced me it was far better to start the garden at the same time.’

So while the garden was taking shape, a poky kitchen was being transformed into a warm, bright family space, with Robert Franklin’s plans to extend it and bring in more light. A warren of back rooms were opened up, the back stairs were relocated, and the kitchen was extended out into the garden, with a dramatic oversized bay window.

Nineteen years on, and good things have been happening at Asthall Manor, which has earned itself quite a reputation for its biennial sculpture exhibition, On Form. Pieces by stone sculptors from around the world cast their spell on the garden, ballroom and the main house, against a backdrop of the most magnificent roses – an Asthall speciality.

Rosie’s love affair with sculpture began almost by accident, as she considered ways of turning the new front gateway to her home into a real statement. ‘Anthony Turner, an old school friend, had some sculptures on the back of his van when he came to stay, which he called plumpkins. And as soon as I saw them I knew I wanted something along those lines for the gateposts. It’s like a vegetable, but with a living character, I was never going to choose something ordinary.’

From this, Anthony and other sculptors persuaded her that Asthall would be the perfect place to showcase new work, encourage people to look at sculpture in a new way and relax around the pieces, feeling the smoothness or roughness of the stone for themselves. ‘I said, let’s give it a go – I couldn’t live in this enormous house without finding some reason for it,’ adds Rosie.

Two years later Rosie and co-curator Anna Greenacre were welcoming visitors back, and again every two years since then. For this year's On Form, the ballroom was furnished by Lorfords Antiques. The collaboration with the antiques specialists was designed to help people to feel more comfortable around sculpture, and see it as something they can live with in their homes.

So what advice would Rosie give to a first- time sculpture buyer? ‘Don’t worry too much about where to put it. If you’ve fallen in love with it, buy it. Just put it down somewhere and live with it... Trust yourself and listen to it, too – really get to know it.’

Rosie practises what she preaches and her daily life at Asthall Manor is lived alongside sculpture, not in a stuffy, high-end gallery way, but in a part-of-the- furniture way, and she often finds herself absent-mindedly touching a piece as she passes it. ‘That’s what they’re for, not for setting on a plinth in a big empty room.