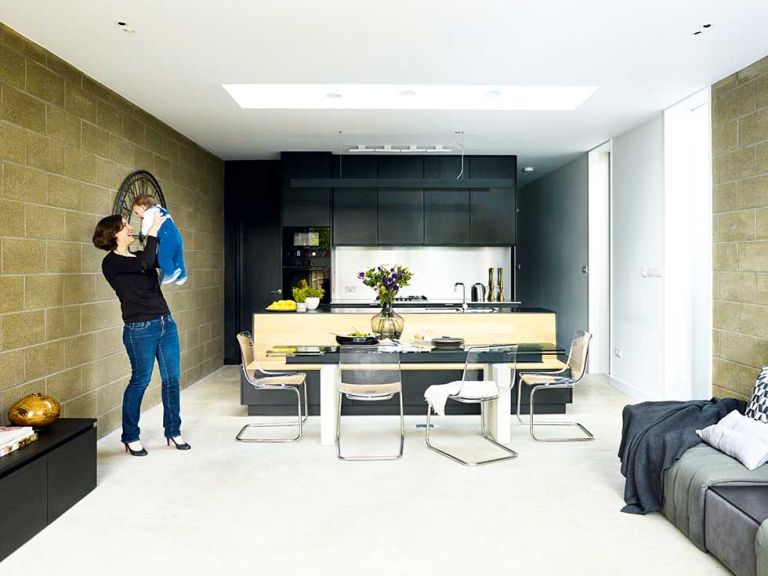 The property: A two-bedroom, ground-floor flat in Wimbledon

When Clarisse and husband Karim first saw the freehold flat in Wimbledon, they knew it was the property for them – despite the previous owners leaving it in a bad state of repair. ‘The flat reeked of damp and we could see stains up the walls behind the sofa,’ says Clarisse. It transpired that the couple had no choice but to knock down a dilapidated rear extension and start again. ‘We were excited about the prospect of starting afresh with a blank canvas,’ she adds.

Find out how it turned out, then browse through more real home transformations and find out more about extending a house in our guide.

Moving in January 2009, they initially spent around £30,000 renovating the two bedrooms to make the flat comfortable while saving for the extension. The property had two entrances, and there was an oddly shaped corridor from the front door to the living room. ‘It made sense to just use the side door and block this off to make better use of the space, which added around four square metres to the master bedroom,’ Clarisse explains.

‘We desperately needed more light as it was dark and cold,’ she continues. ‘We wanted the garden to be a focal point but there weren’t any windows in the living area.’ So the decision was made to add a five-metre extension where the old one stood. As the couple both work full time, they knew they needed an architect as well as a project manager, and Mustard Architects’ Joanna Coleman was recommended to them at a homes show.

The island was designed as a seamless unit to incorporate a bench with further storage, and the joinery design kept to a minimum. A large rectangular fixed-pane, triple-glazed rooflight brings light into the industrial-look space.