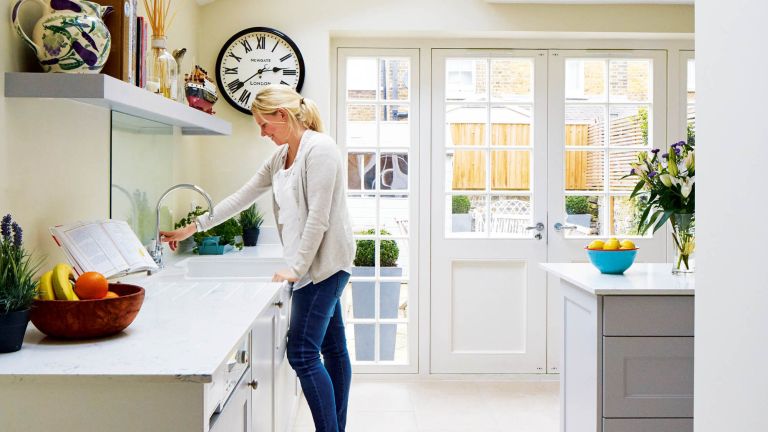 One of the key things that attracted Kiki and Ben to this Victorian terrace was the potential to extend out into the side-return to create a larger kitchen.

Find out what they did next,  then explore more real home transformations and extensions.

‘The properties on this estate were built to house the working classes of the time, and have a lovely cottage-style look,’ Kiki explains.

‘We’d looked at a couple of other properties in this area, but were attracted to this house because it offered the potential to extend, and it also had the small garden that we were hoping for.’

As soon as Kiki and Ben moved in, they started redecorating. ‘We worked from the top downwards, changing the décor in all three bedrooms, adding shutters and storage,’ she says. ‘We knew that the kitchen was going to be a much bigger job, so we waited before we got around to tackling it.’

Making do with the old kitchen gave the couple time to reflect on what they wanted from a new space. ‘It was tiny and only one of us could work in there at any one time,’ Kiki recalls.

‘When you’re cooking, it’s nice to have company, and both of us really wanted a much larger space. There were only limited views of the garden through a small window, and it was always so dark and dingy that you’d have to put the electric light on, even during the day.’

A big incentive to focus on building a family friendly kitchen came when the couple discovered that Kiki was expecting Zac. ‘We’d spent more than a year thinking about what we wanted, so we were pretty clear about the new layout,’ she explains.

They employed Rory Gordon, of Good London Builders, who dealt with sourcing the architect’s drawings and applied for planning permission on their behalf.

‘We did have to make some concessions as our original plans had included a pod bedroom above the new extension,’ adds Kiki.

‘The Shaftesbury Estate, where we live, is protected by The Peabody Trust and they didn’t like the pod room or the extension protruding into the garden. We had to reduce the size by a metre, keeping the extension within the side return, and forget about the pod completely.’

With planning permission finally in place, they began a tendering process with three local building firms. ‘We were working to a tight budget and they all came in too expensive for us, which is why we approached William Gaze, who is a friend,’ says Kiki.

‘His quote was in line with what we could afford and we handed the project over for him to manage. He dealt with the building team and his wife, Sophie, designed the kitchen layout for us.’

The new extension has created approximately 10m2 of additional space, and Kiki knew how she wanted the layout to work. ‘I’d seen a number of similar side-return extensions on the estate and most people had chosen to include a dining table and chairs,’ she explains.

‘However, I already had a table in the sitting room, and it seemed like it would be a a waste of space to me, so I planned to include an island that would double up as a breakfast bar, instead.’

Work took four months to complete, with the couple moving out. ‘We slept on friends’ sofas or in their spare rooms, just to give the team a chance to work without us under their feet,’ explains Kiki.

Kiki opted for hand-decorated Marrakech tiles in a Tinmel design by Fired Earth to add a visual punch to the kitchen. The range cooker and extractor are from Rangemaster

‘During that time, the builders found there were no foundations under the original kitchen, which was unexpected, but they were great and just dealt with it, so we didn’t feel the pressure of the situation.’

Kiki knew she wanted a traditional, country-style kitchen in a pale grey finish. ‘My must-have item for the kitchen was the island, and Sophie introduced a neat, slimline design that has storage, a breakfast bar and sockets to plug in small appliances,’ she says.

Kiki also chose patterned splashback tiles and simple cream floor tiles that extend out onto the patio, making the space feel even bigger when the French-style glazed doors are open.

Steve, the family cat, has his own bespoke cubby hole, which hides away a litter box, from Curver, and provides storage for pet food. 'It's much more hygienic than having an open tray in the kitchen,' Kiki says

Kiki managed to source quality appliances within her price range by going to a Miele double discount day in nearby Abingdon. ‘We queued from 7am and bought a dishwasher and tumble drier, saving us hundreds of pounds,’ she says. ‘They send you a list of what’s going to be available on the day, but you have to quick!’

Moving back in was a bit of a whirlwind, as son Zac was born just a few days later. ‘Now we’ve had time to appreciate it, we love how the extension has doubled the size of the kitchen and how the room’s bathed in light all day long thanks to the patio doors and skylights,’ says Kiki. ‘It’s a true family space.’

New Velux rooflights and bespoke patio doors in the side-return extension allow natural light into the kitchen. The walls are painted in Slipper Satin and woodwork in Wimborne White, both by Farrow & Ball, keeping the colour scheme clean and simple. Devon Bone floor tiles, Topps Tiles