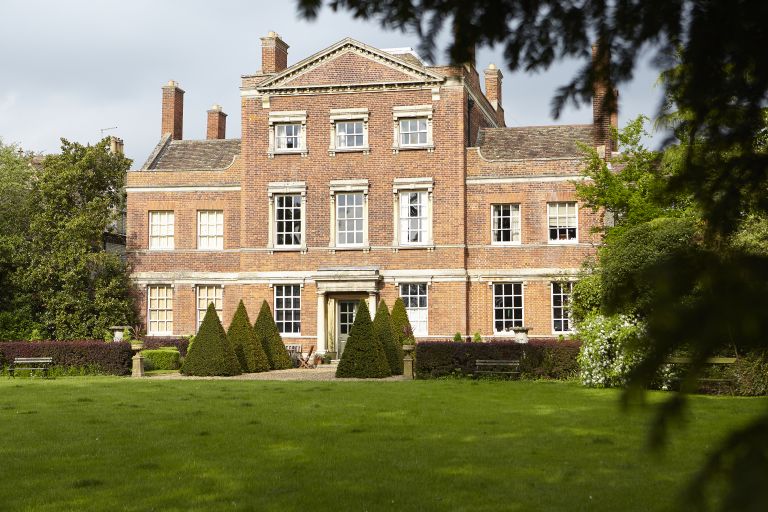 Georgian houses are frequently voted the most architecturally desirable style of property in the UK. Symmetry and proportion are at the heart of the design of Georgian homes, mimicking the classical architecture of Greece and Rome. Decoration and ornamentation is usually understated, and the large, open rooms create a great sense of airiness, light and luxury.

If you’re lucky enough to live in a Georgian home, or simply want to get your quick fix of glorious architecture, take inspiration and ideas from this selection of glorious Georgian properties.

1. A stone-built Georgian cottage is transformed into the perfect family home

Looking at their stone-built Georgian cottage in a quiet village, you might think Kerry and Thomas Bell had struck it exceptionally lucky when they found their pretty home, not far from Edinburgh. The reality, however, is that it has taken the pair quite some time and effort to get it looking this good.

Montague House is one of a trio of elegant summer seaside residences built by a wealthy local landowner. Its chequered history included many years as a girls boarding school, before it reverted to private ownership and gradually slipped into disrepair. It must have been a fine sight in its heyday with carriages sweeping through the gates from the bay, and it was with that image of Georgian glamour in mind that Sheila Soulsby began its restoration.

See the transformation of this captivating seaside home

Home for Melanie and husband Rob today is a beautiful Georgian house on the edge of Epping Forest in Essex, which they bought after deciding to swap their central London maisonette for a more family-friendly home.

‘When Jaxon was born we noticed how noisy and busy London felt and we needed a change of scene,’ explains Melanie. ‘Although we wanted more of a country life, we also needed to be near to the city for work. We wanted the best of both worlds and this area offered us just that.’

When she first saw the estate agent’s photos, Melanie thought the house was too small, but Russell persuaded her to view it. ‘As soon as I saw it in person I was totally smitten. The pretty door and driveway won me over, and inside the rooms had a lovely feel and were full of light. We put in an offer on the spot,’ she says.

Julia Currie always wanted to live in an old property, and when she found this country home on the edge of the Surrey Hills she could hardly believe her luck. Finding the part-Georgian, part-Victorian house was like getting two homes for the price of one.

‘To be honest, I’m amazed that a house so beautiful and historic in this area was in our price range,' says Julia. 'We lost it for three months during the buying process, when the owners accepted a better cash offer, but even then, I had this belief I was going to live here. When that sale fell through, the house was finally ours.’

Be inspired by this home transformation

Owners Alice and Harry Gates were lucky enough to inherit this incredible Georgian farmhouse. When the house came into their possession in 2010, they jumped at the chance to move from London to the Wiltshire countryside.

The house was not in the best condition, and in need of some urgent maintenance when they took on the project. The plumbing and electrics had not been updated since the 1950s, and a neighbouring tree had begun to grow through the roof. With a sensitive renovation, Harry and Alice have successfully adapted the Georgian home to suit their modern way of living, while retaining its original features.

Take a look around the rest of this Georgian home

‘Old Georgian houses like mine have a very strong, benign presence,’ says Dan. ‘Far too many have been changed too much – modern things have been inserted: heating, lighting, or a ghastly power shower. The atmosphere that is present in these buildings has been destroyed.’

Authenticity was been a constant watchword for Dan Cruickshank as he set about renovating his Georgian townhouse.

7. A Georgian cottage on a hill

A house built on a challenging and complicated site is often enough to turn off most potential buyers – but not Tash and Martin Heydon. They had decided that this Georgian cottage was for them before they had even gone inside. In fact, it was the interesting, hilltop setting that sold the property to them.

Once they stepped foot inside, however, the interior of the property was disappointing – a damp warren of rooms with two staircases but no way to get from one side of the house to another. The Heydons were keen to preserve the history of the property in their renovations, and retain its original features, and carefully reconfigured the layout to create a spacious and relaxed family home.

Take a look at the rest of this beautiful property

Amy and Philip Matthews fell for this characterful, rambling Georgian house immediately. Located in a beautiful village setting, its façade was framed by climbing roses and box trees, and the interior was full of original features.

‘It looked absolutely glorious,’ says Amy. ‘We had been for a general nosey around the area and knew parts of it well. I remember thinking how pretty the village was, and then being completely wowed by the house.’

Take a tour of this family home in Oxfordshire

When Ann and late husband Peter bought the house in the 1990s it still contained fittings from the ’60s and ’70s and was in need of modernisation, but they had no concerns about taking it on.

‘We lived in it as we renovated it with the help of a builder friend,’ explains Ann. ‘He came to see it before we bought it and said “don’t touch it”, but we bought it anyway! A lot of the original features had been taken out, so we reinstated its character where we could and brought it up to date taking an ad hoc approach – there was no grand plan.’

See how these homeowners restored their Georgian farmhouse

After spending half a lifetime restoring his old ancestral home in Cambridgeshire, rescuing it from a dilapidated state following a serious fire, Christopher Vane Percy is now ready to pass it on to the next generation.

‘At some point, my wife Linda and I will move into the mews house in the garden and our children will take over the running of this property,’ he says. ‘This house has absorbed so many generations over the centuries and it loves being filled with people.

When Sandy and Peter Borchert first saw this property in the late 1990s, they realised they had found a house that would give them an opportunity to stretch their renovation muscles; and the end result would provide them with a unique family home for the foreseeable future. Their vision to unify the original Georgian building with its subsequent additions more than justified the judges’ decision to name this the Best Townhouse in our Readers’ Homes Awards 2011.

Take a look around this gorgeous Georgian townhouse

12. A Georgian townhouse maisonette with a Parisian feel

With its high ceilings, handsome sash windows and glamorous décor, this two-storey apartment in north-west London glimmers with the opulence and romance of 19th-century Paris.

Stepping into Karen Radley’s townhouse maisonette is more like entering from a rue in Paris’ Saint-Germain district than a quiet road in north London. And once in the living room you are dazzled by a scene of French elegance reminiscent of a baroque salon.

Take a look around this elegant Georgian home

In June 2011, the first stage of the project began. ‘Starting at the top, we worked down to give us more time to save for the structural work on the ground floor,’ explains Rachel. The avocado bathroom suite was replaced and the layout reconfigured to include a freestanding bath and shower. ‘The bathroom actually became a sanctuary since our cottage got a lot worse before getting better,’ says Rachel.

There’s no doubt that tenacity and hard work have paid huge dividends for this couple, who are justifiably proud of their charming home. ‘Our labour-of-love project has altered the course of our lives completely,’ says Rachel. ‘Apart from owning a home we adore, it has inspired David to launch a property renovation company, Ellershaw Property Renovation.

Be inspired by this enchanting renovation story

Three years ago, Kerry and Matt had been looking for a house with a garden and space for a home office, and saw the cottage online. ‘I was intrigued because I couldn’t find it on Google Earth, so I knew it had to be down a tiny lane,’ says Kerry. ‘We loved the area, but this place had everything: peace and quiet, a garden for the kids and an open fire, which we’d been hankering after for years.’

The house had been loved but not well maintained, and one of the couple’s first tasks was to hack back the ivy that obscured the walls and windows. ‘After we had cleared it, I got a carpenter to take out the rotten wood and fill the frames so they would last a few more years,’ says Kerry.

Take a look at this restored, grey-stone Georgian cottage

15. A restored Georgian stone cottage in Cornwall is perfectly dressed for Christmas

Three years ago, Kerry and Matt had been looking for a house with a garden and space for a home office, and saw the cottage online. ‘I was intrigued because I couldn’t find it on Google Earth, so I knew it had to be down a tiny lane,’ says Kerry. ‘We loved the area, but this place had everything: peace and quiet, a garden for the kids and an open fire, which we’d been hankering after for years.’

‘I prefer to surround myself with things that have a story,’ says Kerry, who rarely buys anything brand new for her home. ‘I’m a bit of an old soul, and I like things to talk to me.’

Be inspired by this festively decorated Georgian house