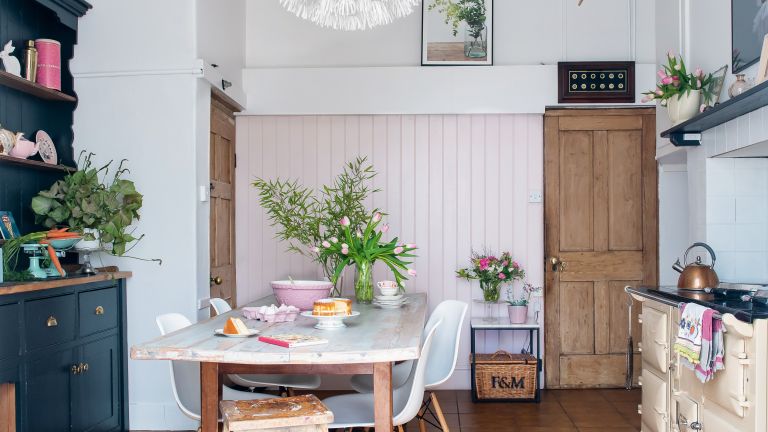 Need inspiration for your own renovation project? Or simply fancy having a look around a gorgeous period property? This home, half cosy Georgian cottage, half lofty Victorian villa, is one of our favourites.

Read on to find out how its owners went about creating a wholly perfect family house, giving it a fresh new look that's right on trend, then browse the rest of our real home transformations. Read our guide on renovating a house, too, for more guidance.

Owners Julia Currie, a photographer (juliacurriephotography.com), and her husband Kevin, a marketing director, live here with their children, Florence, 16, Theo, 14, and Henry, 11.
Property A four-bedroom part-Georgian, part-Victorian house in Gomshall, Surrey.
What they did They’ve decorated the interior to suit their taste and lifestyle, and have plans to create a large, open-plan kitchen-diner in the future.

Julia Currie always wanted to live in an old property, and when she found this country home on the edge of the Surrey Hills she could hardly believe her luck. Finding the part-Georgian, part-Victorian house was like getting two homes for the price of one.

‘To be honest, I’m amazed that a house so beautiful and historic in this area was in our price range,' says Julia. 'We lost it for three months during the buying process, when the owners accepted a better cash offer, but even then, I had this belief I was going to live here. When that sale fell through, the house was finally ours.’

It was February 2017 when Julia, her husband Kevin and their three children moved in, but as the purchase had gone through a few weeks earlier, Julia had made the most of having an empty house, pulling up carpets, stripping walls and repainting some of the rooms. ‘It was a privilege to have the house to myself,’ she says. ‘It has such a rich history and I was able to get to know the place in peace.’

The property was originally one of two terraced Georgian cottages. Two-storey Victorian extensions were later added to each cottage, during which time the cottages were knocked through to create one large house. In the 1950s, it became a guest house, before becoming a single property once more.

‘Thirty years ago, it was sold again and converted back into two homes, each with a Georgian and Victorian part. And that’s what we inherited,’ says Julia. ‘There’s a real difference between the architecture and atmosphere as you move through the house.

The Georgian cottage, where the living rooms are, is small and intimate; the Victorian extension, which has the kitchen, is loftier and brighter. I wanted a period house and, essentially, I have two! It’s the best of both worlds.’

The house is a work in progress – Julia calls it her ‘25-year project’ and has plans to knock through the kitchen, dining room and utility room to create a large cooking and living space that will become the hub of the family home. In the meantime, the photographer and stylist is making subtle décor choices that honour the history of the house while expressing the family’s passions and personality.

‘My style is quite eclectic,’ says Julia. ‘I previously ran a company hiring out vintage furniture and décor for events and photo shoots, so I have lots of items I’ve collected over the years. We were also fortunate that the previous owners decided to leave some furniture that they’d had custom made for the house or was too big to move, such as the piano in the entrance hall, the 1950s Aga and the huge pine dresser in the kitchen.’

‘I painted the dresser black, much to my mother’s horror. But it’s much more me now,’ laughs Julia.

‘And I’m a complete convert to the Aga. It was originally coal fired and had been reconditioned and converted to gas; we’re quite lazy cooks so it’s perfect.’

She also installed tongue-and-groove panelling where the previous owners had cork tiles on the wall, choosing a calamine pink paint. ‘I’ve tended to use soft tones throughout the house, such as the pale grey in the living room and cream in the bedroom.

'The exception is my office, which is in the original entrance hall-dining room. I chose a dark blue here to make it feel cosy but I kept the ceiling white as I didn’t want it to become too cave-like,’ Julia says.

The story of the house is revealed as you walk through its rooms. The different shutters and window designs in the Georgian and Victorian parts show shifting trends in architecture; the newly exposed floorboards reveal patches of paint, indicating where rugs would once have been laid; the varying ceiling heights show the house’s transition, from country cottage to grand Victorian home.

Now it’s the turn of Julia, Kevin and their children to put their own mark on the space. ‘I feel we’ve only just begun,’ she says, ‘and we have so much to look forward to.’