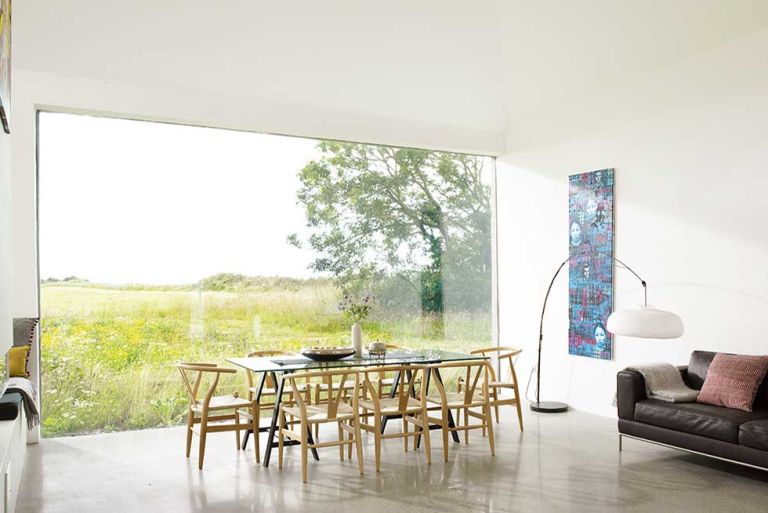 When Louise McGuane decided to return to her home country of Ireland, she knew exactly where she would stake her claim: in an old stone cottage on the family farm in County Clare that had lain derelict since her great-aunt’s death. Louise felt it would be the perfect opportunity to reconnect to the life she’d left behind decades before, and to create a weekend bolthole that the whole family could use.

Their extension project is one of our favourites – find out how they did it then browse more real home transformations.

Want more practical advice? Check out our ultimate guide to extending a house, too.

The owners: Louise McGuane, founder of The Chapel Gate Irish Whiskey Company, and her husband Dominic McCarthy, who works in public relations, live here with their Jack Russell, Ruby

The property: A four-bedroom, extended stone cottage, dating back to 1890, in County Clare, Ireland

The cottage has a long connection to her family. ‘My grandmother was born here and the property has been in the family since the 1700s,’ she says. ‘It was used as a hideout by Irish rebels in the past, and during the renovation we found an old flintlock pistol, which we dated to around 1780, plastered into the rafters. I met Dominic shortly after the project started and we named the cottage The Safe House as a nod to both its history and to the respite it offers from our busy London lives.’

Louise’s vision was shared by her friend Jean-Claude Girard, a Swiss architect, who worked with her on the project. Together, they came up with the idea for an extension that would follow the cottage’s original footprint but also incorporate a series of sheds, resulting in an L-shaped design nearly twice the size.

The existing downstairs rooms would be reconfigured to create a light, open layout and a new first storey added in the roof space. In total the number of bedrooms would be increased from two to four.

The 18-month build began in December 2012 while Louise was working in Singapore.

The cantilevered staircase was custom-made by the builder using railway sleepers as stair treads, fitted to a steel structure built into the wall.

Louise clad the Soho bath from Bathstore in the same reclaimed maple wood as the kitchen island, and also used it for the flooring.

Louise and Dominic created a wildflower meadow around the cottage, which attracts wildlife such as foxes, pheasants and hares for them to watch through the huge window.