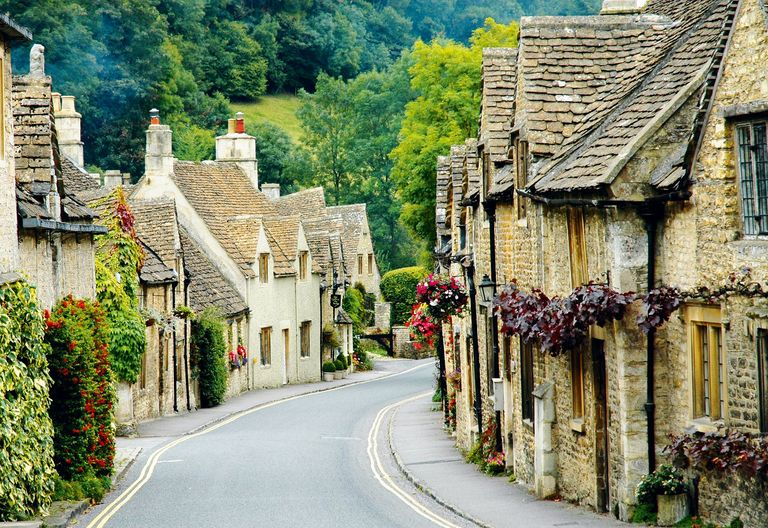 The Cotswolds is famed for ‘chocolate-box’ villages, such as Castle Combe, considered one of the loveliest in the region, with pretty cottages built in honey-coloured stone

For a small island, Britain is remarkable for the variation in its styles of historical homes. It is the enormous variety of ‘vernacular’ architecture that adds an undeniable charm to traditional villages and small towns the length and breadth of the land. A vernacular house is one built with what was available at the time, in terms of both local materials and manpower. Such properties were usually simple, practical, and often rugged, and grew in an organic way to suit the living patterns of succeeding generations.

Thanks to the enormous diversity of Britain’s geological formations, it often seems that every subdivision of every county has its very own idiosyncrasies that root the houses firmly in their immediate environment. As the underlying rock changes from limestone to flint, or from granite to sand, so the buildings change in appearance and in their appeal.

Before the mid-17th century, all domestic architecture was vernacular. It was ‘of the region’ because architecture in the modern sense of the word did not exist — there was no deliberate design with an element of aesthetic choice. By contrast, a house that is not vernacular is known as ‘polite’ — it is deliberately designed to be the way it is and could be built, probably using local materials, in any part of the country. Examples of the ‘polite’ style are Georgian, Queen Anne revival, high Victorian Gothic, and even Arts and Crafts homes fall within this category.

If you’re thinking of renovating a vernacular home, it helps to understand how and why certain materials and building techniques were used at the time in some of the different localities.

This region, which covers much of Gloucestershire and west Oxfordshire, extending into Wiltshire, Worcestershire and Warwickshire, is famed for its traditional buildings built using local limestone.

The glory of the warm golden Cotswold limestone, which varies considerably across different parts of the area, is that it can be used widely for carved and ashlared finishing, although this usually only features on the finer buildings. The lesser buildings of old are built entirely of blocks roughly dressed at the quarry or on site — and so frequently look as though they rose up out of the ground on which they stand.

From Kent through what is now Sussex, there are ranges of chalk hills – the North and South Downs – and, as a result, oak and clay form the basic materials in many of the vernacular buildings.

In medieval times, much of the forest was gradually felled to serve the iron-smelting industry, and the use of brick made from local clays increased. Likewise the use of tiles spread. When oak had to be used more sparingly, then the spaces between the timbers could be covered in lath, and tiles hung onto the exterior. It is decorative tile hanging, which features repeating patterns, that is a particular feature of the area.

Flint is also found widely. It exists in the chalk seams that run up from the Dorset coast through Hampshire, and looks particularly lovely in combination with brick.

To the east, weatherboarding is used as cladding. Good examples are to be seen in Kentish towns such as Folkestone, Ashford and Sandwich.

Worcestershire, Herefordshire and Shropshire are often referred to as the ‘black-and-white counties’ after the characteristic timber-framed buildings that provide much of their charm. Many are renowned for their decorative panels – often of brick – that are frequently incorporated in the half-timbering.

Elsewhere, however, red brick is the predominant vernacular style of this region.

If you intend to carry out work on a vernacular house that is listed, it is necessary to seek listed building consent for any alterations that would detract from the special architectural or historic interest of the building.

In Somerset, the colour of limestone houses is of a rich brown, while in the centre of the county, around the Blackdown Hills, and Somerton, many historic village centres consist entirely of cottages built out of soft blue Lias limestone.

In terms of building materials, Devon is easily the most diverse of the western counties.

However, cob – a mixture of dung, mud and straw – is the traditional building material for which the county is most famed. Massive cob walls beneath a thick layer of thatch produce the ‘tea cosy’ look that so characterises the cottages of this county.

In Cornwall, slate and granite are the main building stones and many of the houses, as with Devon, are covered with layers of white or pale-coloured lime render.

Although fine building stone is still quarried in Lincolnshire, Northamptonshire and Rutland, East Anglia generally lacks good stone. The result is that the traditional domestic buildings of the region are often dominated by weatherboarding.

Much flint is found in the underlying clays, and in East Anglia it is quite common to see it randomly mixed with broken bricks or rubble and contained by brick quoining (cornerstones). You will also see it layered in courses with brick above and below, coursed with brick quoins, or attractively laid in alternating square panels or chequerboard patterns in conjunction with brick. In many historic buildings in the region, flint is knapped (dressed) and laid as flushwork with ashlar stone.

The clays that underlie much of the region also give rise to brick. The soft red bricks seen in East Anglia are often laid in elaborate patterns, while the clay in East Norfolk produces a rather insipid-coloured yellowish brick.

In the southern half of Suffolk, and also in Essex and Cambridgeshire, there is much external plasterwork. A local speciality is pargeting, where delicate patterns are formed for decoration.

Despite the diversity of scenery there is a strong sense of continuity of building styles in traditional homes in the north. The use of hard sand and gritstones and slate has traditionally led to a no-nonsense type of squat four-square building that constitutes a type seen from coast-to-coast, traversing the Pennine hills that form the backbone of northern England.

In the clay-rich lowlands of Cumbria, many of the buildings are re-made of the local red and cream bricks, with quoins of dressed stone. The only other area where you will see many older houses of brick is the Vale of York. In the Lake District, the stone buildings are often whitewashed and roofed with local green slate.

The Heart of England

In the east of the region, stone is more visible, and entire villages are built from the orange-red and golden-brown ironstones, also known as marlstones, that are contained in the great limestone belt that continues from the Cotswolds into the west of the area.

The roofs in this area are more varied than almost any other region – warm red pantiles compete with a variety of slates, from blue-grey to a pinkish purple. Thatch is quite common, and roofing of local Swithland stone – ‘slates’ cut from local granite seams – is to be found to the north of Leicester.

Tips for renovating a vernacular home

It is the passage of time that makes any vernacular building special. It can never be restored or renovated to look exactly as it did when first constructed — although sometimes an authentic repair can be carried out.

Many period house enthusiasts find themselves restoring homes that date from a number of different periods, including well into the 19th century. A good restoration, based on the ‘like for like’ principle, will attempt to be true to all those periods.

A vernacular property that dates from before 1640 will undoubtedly contain a variety of materials that will have been sourced very locally — the sand that was used in the daubs and mortars may have been dug no more than a few hundred yards away.

For all sorts of reasons these may be hard to match today. Therefore, if you are restoring or extending you have an immediate problem in matching colour and consistency. But, as far as you possibly can, keep it local.

Learn as much as possible about the style and type of house before you start work. Study the older houses in the locality — the materials, the textures and any features that might appear to be unique. Research, and talk to others in the area that have undertaken similar restorations: learn from their successes and failures.

Hold on to later additions

Don’t feel that you have to strip every room back to expose original details. Consider keeping later additions if they add to the history of the room. A 1920s fireplace retained in what was originally a Victorian chimneybreast is a lot more honest than a replacement reproduction Victorian grate.

Cottages changed over time, and we should recognise this.

Extend up to 25 per cent

If you really need any more extra space then consider moving home. A cottage with a huge conservatory and granny-annexe is no longer a cottage!

Think before you spend

The Society for the Protection of Ancient Buildings (SPAB) has a well-known phrase: ‘poverty protects’. Consider the options before spending large amounts of money on restoration. Major work, involving replacement of materials, may not be needed.

Live with the house and the space for 12 months before making big decisions. Planners will always regard what is there already as far more important than what you are proposing to add to it.

One stage at a time

Renovating one area at a time makes the whole project more manageable, and allows you to learn skills as you go along. Employing tradespeople on small projects gives you the chance to try them out before you are committed to a large outlay.

Adapt your lifestyle to suit

Don’t expect every room in your house to be constantly warm and dry. A little damp in one or two rooms, provided that it is not likely to cause serious damage to the building, can be tolerated. It has probably been there for generations and the rush to eliminate it may well do more harm than good.

Don’t seal up rooms too tightly. Old properties with porous ‘breathing’ walls need to breathe from the inside as well as the exterior.

They are the key to the external appearance of vernacular buildings. All too often modern windows that do not match are fitted to cottages during restoration work.