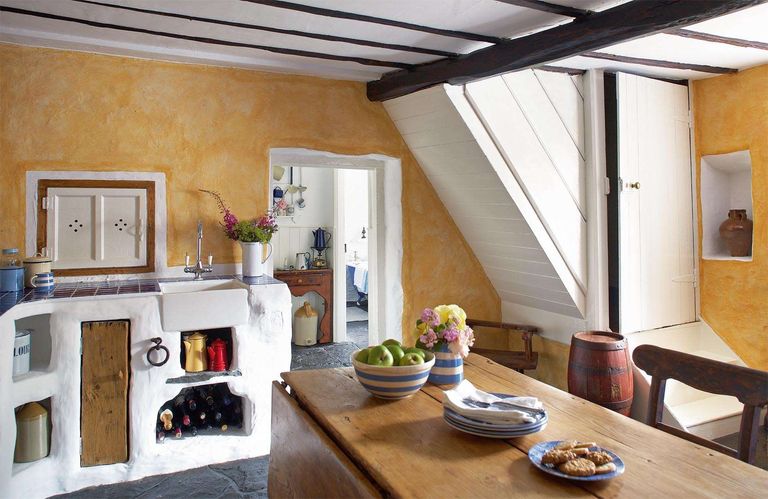 After travelling the world for a couple of years Sonja and Kevin Bergin decided to buy a home in the Irish countryside, where Kevin had spent a happy childhood. They chose a thatched stone-built cottage and have been renovating for the last two decades. Let their sensitive restoration of their thatch cottage inspire you to embark on your own project.

Looking for more inspiration? Browse our real home transformations. Read our guide on renovating a house, too, for more guidance.

‘It took nearly a year to buy this house,’ explains Kevin, ‘as the purchase was subject to planning permission for a septic tank. This was frustrating but it gave us more time to gather funds: we couldn’t get a mortgage as the building was thatched and had no services, so we had to apply for a personal loan.’

Owners: Sonja Bergin is a medical scientist and her husband, Kevin, is an electrician; they have four cats

‘But there was great excitement when we finally got the original key the following summer,’ Sonja adds. Although the property had been empty for 12 years, it had been well looked after: while the roof needed initial repairs, the building was structurally sound. However, there was just electricity in a couple of rooms, no running water and no indoor lavatory.

Sonja explains: ‘As Kevin and I didn’t know much about traditional renovating, we hired a builder to bring it up to a habitable standard.’ He put in timber and stone flooring, plastered the walls and ceilings, built a partition wall for the bathroom and inserted a staircase for the master bedroom, which had been accessed by a ladder.

Meanwhile, Kevin wired the property, and his brother-in-law helped him with the plumbing for the bathroom and kitchen.

Unfortunately, the work had included finishing some of the walls with concrete; years later, Kevin went on specialist courses and learned that it wasn’t good for the house so set about putting it right.

Repairs included chipping back the modern plaster and redoing it with lime, which Kevin mixed and applied himself; with the help of his brother, Joe, he also repointed the walls using lime mortar and finished them with 12 coats of limewash.

Beneath more cladding, other apertures have been discovered throughout the house. ‘There’s a small window in our bedroom that still has one tiny shutter on it,’ Sonja explains. ‘It had been blocked up with stone by a previous owner. And there are useful recesses and cupboards built into other walls.’

As and when time and money allowed, and when new knowledge was gained, the restoration progressed. ‘When we first bought the house there was a plywood ceiling in the kitchen,’ says Kevin, ‘and when we removed it we discovered a massive beam that spanned the room; a huge hearth had been blocked up as well so we restored this to its original state.’

‘We wanted to maintain the whitewash on the exposed stone walls, inside and out,’ says Kevin, ‘and we freshened up the woodwork – the exterior window frames and door are now blue.’

But to complete the biggest job – replacing the thatch – they’ve had to call in professional help.

‘Last year, we hired a local master thatcher,’ says Kevin. ‘He found nearly two tonnes of junk in the old thatch: there were concrete slabs, tin sheets, slates and plastic bags all hiding under the straw.’

‘Thanks to Kevin’s vision and hard work,’ says Sonja, ‘the house is now a protected structure (Ireland’s equivalent of a listed building) so the architecture will hopefully survive for generations to come.’