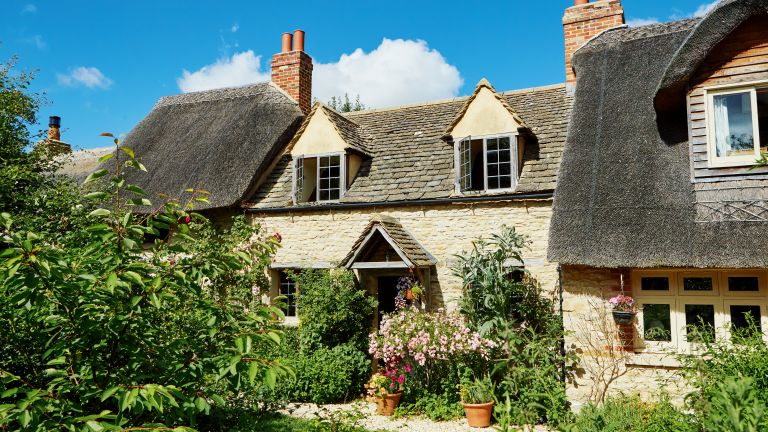 Built as part of a row of seven farmworker’s dwellings, this mid-17th-century cottage hadn’t been lived in since the 1980s, and the main section had almost completely collapsed, but luckily it has been sympathetically revived by a dedicated period property enthusiasts.

Let the Mackay's loving restoration inspire your own period home renovation or be inspired by our many more real home transformations. Read our guide on renovating a house, too, for more guidance.

Next to the duck pond, at the heart of a sleepy Oxfordshire village, sits Neil and Helen’s part-thatched cottage, which appears as though time has stood still. In fact, quite the opposite is true as nothing much has stood still here, least of all Neil, whose single-handed renovation of this mid-17th-century home has kept him busy part time for 10 years.

Built as part of a row of seven farmworkers’ dwellings, the cottage hadn’t been lived in since the 1980s, and the main section had almost completely collapsed by the time Neil spotted it up for auction. ‘The walls were only visible to sill level,’ recalls Neil. ‘Other than that it was just a wooden shack with a crinkly tin roof, used as a coal shed and store.’

What Neil saw in the cottage went far beyond that crumbling shell. An architect by trade, he traced the marks that history had left on the building, gradually piecing together its story from the architectural clues.

He also discovered that the central part of the cottage had been substantially rebuilt in the mid-18th century. ‘Part of the adjoining cottage had been used to enlarge this kitchen, which would explain why there’s another fireplace there. So we’ve worked with the floor plan as it was remodelled, and whereas the living room and bedroom above it were more of a careful restoration, this side of the cottage has been a reconstruction to the 18th-century plan,’ says Neil.

Neil had a vision for the house that now, 11 years later, he considers truly realised. He rebuilt the main section using a reclaimed oak frame put together by the builders, with a skin of Cotswold rubble stone and lime mortar on top, infilled with Hemcrete – an eco-wonder material made from hemp and lime.

‘It’s breathable, flexible and offers a high thermal mass,’ says Neil, ‘and it allowed us to lay the stone outside in a completely traditional fashion, still giving us good insulation, which allows the ground-source heat pump to work at its best.’

The builders did the groundworks and got the basic shell of the building up, then Neil called on specialists for the windows, and tiled and thatched roofs, finishing everything else himself using mainly reclaimed materials.

Other discoveries in the thatched section included the lino floor upstairs, which can be dated exactly, as beneath it are newspapers from the week of the Queen’s coronation in 1953.

Behind a 1970s fireplace in the living room below, Neil and Helen were delighted to find a bread oven, now restored to working order, and a salt shelf. The joinery and distinctive door latch at the foot of the stairs were further evidence that,  apart from the fireplace and lino, the last time any serious work was done on the cottage was around 1790.

At the heart was Neil’s determination to keep a clear distinction between the rebuilt central section, and the renovated part of the cottage, the most obvious difference being in the roofing materials – Cotswold stone tiles for the rebuilt section, thatch in the other.

‘There is a tendency to want to tidy up history, and to have a row of cottages all looking the same,’ he says. ‘But the fact is that they have been there for 400 years, and in that time there were changes and boundaries moved around and rebuilt slightly differently, and that’s part of the character and the history, so I didn’t want to lose that.’

Once the fabric of the building was intact, Neil turned his attention to the finishing touches. Reclaimed flagstones, salvaged doors, a kitchen pieced together with a selection of auction finds, and shutters and worksurfaces made from reclaimed elm all find new life in the cottage against a backdrop of authentic lime plaster and paints.

Neil mixed the paint finishes himself from the raw ingredients. ‘With equal quantities of linseed oil, egg and water, it’s more like mixing mayonnaise than paint,’ he smiles. ‘You just add some colouring, iron oxide, or titanium dioxide and a tiny quantity of lamp black – very fine soot. It’s touch dry within an hour and lasts wonderfully. It’s breathable and has similar qualities to the wood and lasts well so reduces maintenance costs.’

From the impressive environmental performance, with its ground-source heat pump and underfloor heating, for which Neil lifted and relaid the flagstones, to the Hemcrete insulation and rebuilt central section, there have been surprises at every stage. ‘The fact that people come to the property and can’t initially tell that this part is reconstructed is frustrating in some senses, but also an immense compliment,’ says Neil.

‘The difficulty with conservation work is that if you do it right, most of the time you can’t see that anything’s been done.’ But the hours of research, reconstruction of period details and patient repair of salvaged finds that define this project would say otherwise.