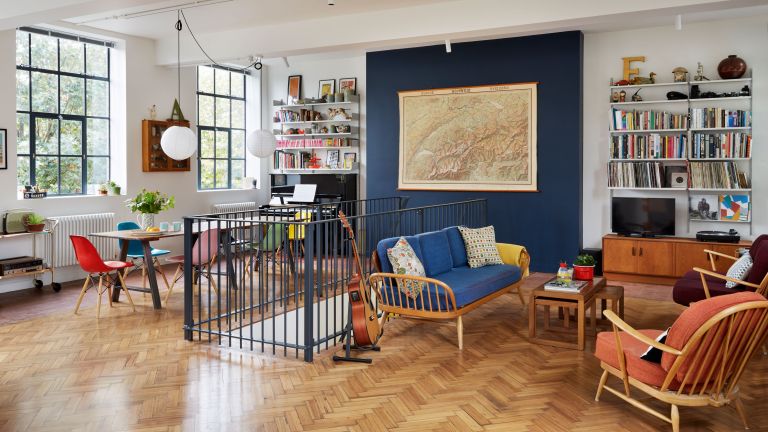 Looking for a unique home and not afraid to take on the challenge of reimagining a building originally intended for something else? Take a look at this wonderful home, converted from a school built in 1935, then check out more of our inspiring real home transformations.

They say your school years are the best days of your life, so Carlo Viscione and Florence Andrews must be happy homeowners. The warehouse-style space they’ve carved out of an Edwardian school annexe might be light years away from the building’s educational origins, but the couple were keen to preserve its history when they set about renovating their home.

Although Carlo and Florence’s house originated as part of a school – first as a canteen, then an art department and a science laboratory – it’s had several lives since, functioning as a recording studio in the 1990s before being converted into flats.

When the couple viewed the building, they’d already looked at more than 40 other properties. ‘We were pretty picky about what we wanted,’ explains Carlo. ‘But the potential and original features caught our eye.’

What appealed to the couple were the generous proportions and the original features: solid pine herringbone flooring, perimeter terracotta tiles and a concrete stairwell with metal balustrade.

‘It was about £100,000 cheaper than most of the houses we’d viewed and almost twice the size, but it needed a lot of work,’ Carlo says. While the flats still contained clues about its heyday as a music studio, ‘we could see where the live-room and the mixing room had been,’ Carlo says. It had since suffered neglect. There was graffiti on the walls left over from squatters, as well as damp in the corners. The windows were made in tatty uPVC, the external render had blown and the garden at the front was overgrown.

Embracing the challenge meant that Carlo and Florence could get creative with their ideas. They applied to the planning office to convert the building from two self-contained flats into a family home, then submitted a second application to convert the flat roof into a wildflower green roof terrace.

Carlo drew up detailed plans for the building with the idea of reviving the period features and uniting the two floors with internal staircases. The first floor would be an open-plan living space complete with a kitchen, dining area and Carlo’s home office. On the ground floor there would be room for three bedrooms, two bathrooms, a utility and a generous central hallway.

Once the building was stripped back and the period features protected, the couple faced the challenge of how to create rooms within the open-plan space. They combatted this by transforming the top floor into a zoned layout. The newly installed kitchen has concealed appliances and stainless-steel worktops, while the living room houses the couple’s extensive collections of design books and vinyl. Combined in one light and airy room, it provides a space for cooking, entertaining and relaxing.

After months of hard work, it was time for Carlo and Florence to make their mark on the property. ‘We had a lot of art that we have collected over the years, so it made sense to paint the majority of the place white to let the colours in our prints stand out,’ Carlo explains.

One central wall is painted in a dark navy as a backdrop for an antique map of Switzerland. The staircase’s vibrant shade was another deliberate choice. ‘We like having yellow in our home – it wakes you up in the morning,’ Carlo laughs. ‘In a space like this, with such tall ceilings, we could afford to go brighter.’

Read about more fabulous home transformations, and how to achieve them, by subscribing to Real Homes magazine every month. You'll never miss an issue and will save £s

Carlo and Florence were careful to preserve the history of the building without compromising their personal style. A white steel staircase leading up to the roof terrace references the 1930s aesthetic of the house, and Carlo spent time choosing double-glazed steel windows that look as similar to the originals as possible.

One of the most unusual features of the house is the wildflower rooftop, where otherwise wasted space has been turned into an urban garden. ‘It provides views across Wanstead Flats, the BT tower and Canary Wharf, yet it’s completely private and secluded,’ Carlo says.

This project may have tested the couple’s planning and design skills, but the results speak for themselves. ‘We had such detailed plans for everything from the sockets to the plumbing that we came under budget and ahead of schedule,’ Carlo says. ‘By being thorough and organised, we didn’t have to compromise on the design. We love the aesthetics of our home and how the industrial features just blend in.’

Designers Made With Volume