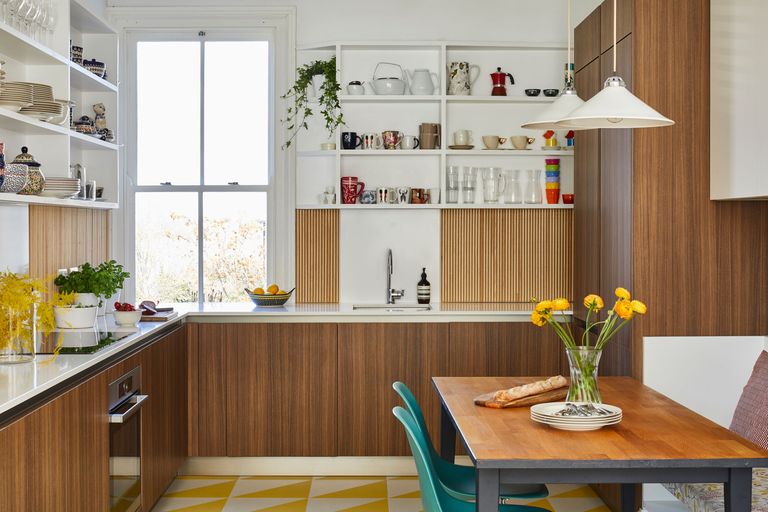 Lucy and Jack’s extended London flat is proof that small properties needn’t hold you back when it comes to design. In fact, they’re all the more reason to get creative with your ideas. For families in particular, it’s about maximising every corner’s potential – like the way the couple have used plywood to create a quirky fitted family home.

As a growing family unable to afford a larger property, Lucy and Jack looked to the loft of their first floor flat to give them the room they needed. By extending upwards, rearranging the layout and adding plenty of clever fitted furniture and built-in storage, they have made a practical space for the four of them – but don’t let that fool you into thinking it has to be boring. Their innovative use of materials and splashes of colour mean Lucy and Jack’s home is a celebration of all things design – and a creative playground for kids and adults alike.

The owners Lucy and Jack Williamson live here with their children, Sophie, seven, and Simon, four.
The property A four-bedroom purpose-built flat in an Edwardian terraced house in Alexandra Palace, London. Project cost £140,000.

'There was lots to think about and update,' says Lucy. 'We only had one tiny bathroom, and with two kids it was way too small for us. The kitchen was at the back of the house and we found ourselves living constantly in the corridor, walking back and forth to the living room to check on the kids. We didn’t feel comfortable leaving them playing on their own, so going open-plan would let us keep an eye on them while we’re cooking.'

'We lived here for 12 months before the build, which allowed us to understand how we use the space,' Jack continues. 'From looking at where the light hits the property and how we use it throughout the day, we were able to think the layout through properly – the front of the property is the family space, where we can cook and chat and play games, and the back is the private, night-time space.'

'We have a north-facing garden that we don’t use for six or seven months of the year, so we replaced the stairs leading down to it with a trapdoor to save room. It was a testing time, but it’s a distant memory now – the sign of a good process, I think. It was the most economical way of doing it.'

The key to making their project work was in converting their 'amazing loft with lots of potential', but because they were in a shared freehold with a downstairs neighbour, the couple had to apply for planning permission beefier they could go ahead. 'We were granted a slightly shorter dormer extension than we wanted,' says Lucy.

'Our architect drew up plans to extend upwards to create four more rooms, including two bedrooms. We wanted to maximise the potential of the property. Our house is slightly sloped compared to the properties on the other side of the street, which is why there’s a split-level layout on each floor. That meant we had extra headroom to play with and could create an airy feel to the whole apartment.'

The plentiful use of plywood gives the flat a unique look, the material's natural beauty left exposed. 'It’s oiled, not varnished, so it’s as close to its original form as it can be – it’s a very honest material,' says Lucy. 'It has that sort of Scandinavian warmth to it that makes it feel very friendly and cosy. It’s still bit of an innovative material over here, but it’s been used in the Scandinavian countries for a long time in homes.'

'We also have a few exposed beams, which we left in because covering them would mean losing the ceiling height. We painted them to add colour to the rooms, and I think they create a cool contrast to the more warming wood.'

Since the project was finished, the family has been able to spend more quality time together. 'The space is so well-used – the kids put all the toys on the floor and spread them right out into the kitchen, so we can talk while we’re cooking,' says Lucy. 'We wanted to make the space quirky, with steps and shelves, and we squeezed in as much storage as possible– we’ve built everything in instead of using freestanding furniture.'

Get renovating and project inspiration, best buys and creative ideas delivered every month with a subscription

'There’s a flow to the top floor, because even the kids’ beds are built into the design, and it meets our needs perfectly. It’s fun, too – there’s always little surprises, like extra space in a cupboard that you didn’t know was there.'

Adding to the fun feel of the home, the children were encouraged to choose the colours of the doors to their rooms. Simon picked yellow and Sophie’s is pink. 'They were a big influence on the project in general; we discussed it with them and talked them through it all, even taking them upstairs during the build so they could see how their rooms looked,' adds Lucy.

'They definitely treat it like a playground. They were really involved, asking if they could have more colour on the walls and things like that – which is why we went for the painted doors.'

Though they'd hoped to the project during the summer, for various reasons it ended up happening during winter. 'The weather wasn’t amazing,' says Jack. 'In general, we had to hope that what we’d spent a long time trying to plan worked out in the end.'

'The architect hit the nail on the head with what we’d envisioned. Before we started the work, we were just living here – but now it feels like our family home. We have much more of an emotional connection to the property. We can relax and recharge; it’s good for our wellbeing.'