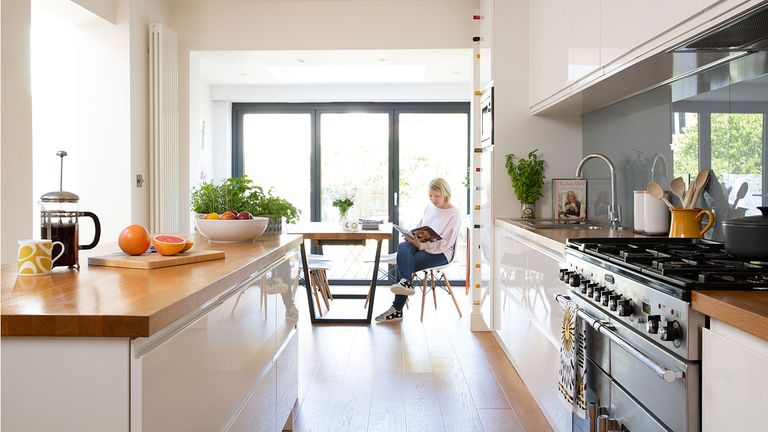 Viewing 13 homes in one day was a completely exhausting yet necessary step for Laura and Ed Gray when they first started house-hunting in Nottingham. As the pair were itching to move out of their small one-bedroom flat in London’s Crouch End to gain more space, they had to cram in as many viewings as possible when visiting Laura’s family in Nottingham.

Although they’d considered Ed’s home town of Norwich or moving back to Cambridge where they first met, unsurprisingly, the pull of family and friends, coupled with much lower house prices, meant it was game, set and match to Nottingham. ‘Viewing so many properties in one go was a mammoth day,’ remembers Laura. ‘But the last one, a private sale, was lucky number 13. We loved the family room off the kitchen, and it was close enough to my parents, but not too close!’

Read on to find out how they transformed it, then browse the rest of our real home transformations. Read our guide on extending a house, too, for more guidance.

Luckily Ed was able to transfer to his company’s Nottingham office and Laura, then a tax adviser, found a position with a new firm. However, it was a hectic time. ‘We got married in Cambridge, moved house and started new jobs all in the space of three weeks,’ she says. ‘It was absolutely nuts.’

Initially it was a case of toning down the magnolia and lemon colour scheme to make the house more liveable, with the bathrooms and kitchens staying on the back burner for a good five years. Laura had never liked the cheap beech wood kitchen units, black worktops and lino floor, but when their sons came along, the inadequacies of the space became even more apparent.

‘It had one high window overlooking the garden and a side door with steep steps down to the side return,’ she says. ‘We couldn’t let Arthur go in the garden alone as we couldn’t see him from the kitchen. It made sense to extend and create a kitchen-diner with bi-fold doors.’

The main game changer though was extending into the side return to create a lobby area with utility, boot room and toilet. ‘Originally we wanted one big open-plan room but couldn’t afford the steelwork required,’ says Laura. ‘Luckily my dad’s a retired architect – he designed the space with rooflights above the dining area and the utility to bring light further into the kitchen. We don’t have an understairs cupboard as we have stairs down to a cellar, so it gave us somewhere for coats and shoes, too.’

The first and second floors have adapted to the family’s needs over the years. ‘The room at the top of the stairs on the first floor was originally a bathroom, but there was another bathroom and separate toilet next door, which just seemed   silly,’ says Laura. ‘We knocked the bathroom and toilet together to make a bigger family bathroom and turned the additional bathroom into a fifth bedroom for George.’

Later on, when the neighbouring boiler kept waking George at night, he was moved up to one of the loft bedrooms. ‘We added rooflights and I designed a built-in bed to make use of the eaves space,’ says Laura. ‘But it wasn’t until we visited a neighbour that we realised there was a bricked-up void between the two lofts where I could also create a big landing cupboard.’

The £332,500 that Laura and Ed paid for the house back in 2006 has turned out to be a shrewd investment, as it’s now worth around £600,000. What’s more, the success of the project gave Laura the impetus to pursue a long-held passion to retrain as an interior designer.

‘I’d been dragged round building sites and show homes by my dad as a young girl, and I’d helped friends renovate their homes, so it seemed the perfect fit,’ she says.

However, it wasn’t until their sons started school and the couple were both told their workplaces were being relocated that Laura got the push she needed to follow her dreams. After embarking on a distance learning course with KLC School of Design, she’s now self-employed and has teamed up with a neighbour and friend, who’s also an interior designer, to put together show home interiors for local builders.

The living room – the last room to be decorated – acts as a bold showcase for Laura to bring clients to. ‘It was starting to feel tired and bland,’ she says. ‘It took about two years to convince Ed to paint it dark, but after I created a mood board, he went along with it.’

Despite getting itchy feet a couple of years ago, the Grays are now certain they’ve found their forever home. ‘We looked at a few houses as we wanted off-street parking,’ says Laura.

‘But, it just made us appreciate the proportions we have and prompted us to redecorate. We also knocked down a brick wall at the front and had a driveway laid – much less hassle than moving house!’

For more ideas, read on: