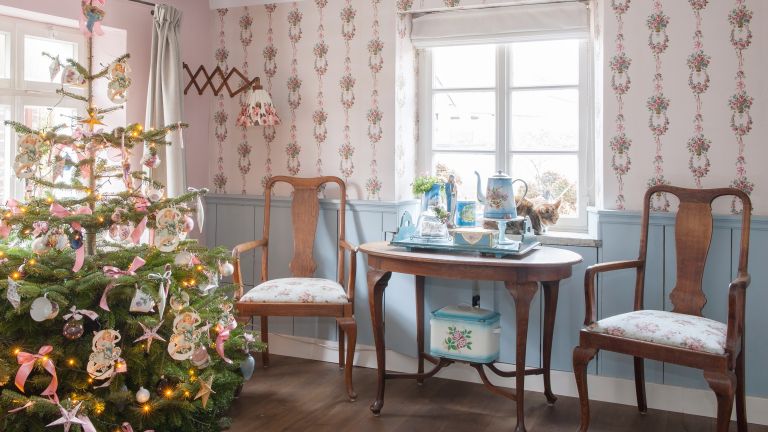 People thought Gwen and Rob were crazy to take on a dilapidated farmhouse, particularly because at the time Gwen was studying fashion design 60 miles away in Arnhem and had very little income.

See all our real home transformations, and be inspired by our traditional Scandinavian style decorating ideas.

Owners  Rob Peeters, a lorry driver and owner of a web design company, and Gwen Dorpmanns, co-owner of a children’s furniture and accessories company (bygekkinderwebwinkel.com), live here with their children Saartje, eight, and Dirkje, five, and their cat Mimi.
The property  A two-storey farmhouse built in the 1850s in the small town of Baarlo, Limburg, in south-east Netherlands, not far from the German border.
What they did  The couple had to repair and restore almost everything: floors, ceilings, plumbing, electrics, roof and window frames, all the while preserving the home’s original features.

Undeterred, and not wanting to give up on the house she’d fallen in love with, Gwen found herself a part-time job. There was a roller-coaster few weeks as the couple first found out that the house had been sold to a developer, only to hear that he’d then put it straight back up for sale again, minus the original land.

The property’s previous owner had lived there all her life, and was 93 when she died. Almost everything needed to be restored or replaced. It was quite a shock to Rob when he finally got to see the interior. ‘The house was in a deplorable state,’ says Gwen. ‘There were huge holes in the roof that had been stuffed with straw and old rags in an attempt to keep out the worst of the draught and damp.’

Fortunately, Rob was able to look beyond the many repairs and see that their new home had potential. Gwen and he agreed that they should preserve the original, characterful look of the house, which is so typical of the region. Low ceilings, small cosy rooms and as many period features as possible were restored and incorporated into the renovation, which encompassed electrics, woodwork, heating, plumbing, floors, ceilings, doors and window frames – everything needed attention.

The couple worked on the property six days a week for nine months, enlisting a lot of help from their parents, until they’d transformed it into the quaint country home they wanted.

They’d initially planned to keep the small rooms and the layout exactly as it was, but when their children came along they realised that a more spacious interior would be better and so built a new kitchen extension. ‘We love having all that space to cook and entertain,’ says Gwen.

The kitchen extension was built with the help of both their fathers, and a family friend. The cabinets are made of oak, which they distressed to match the feel of the old house. The concrete kitchen counter was mixed and poured in situ and works well in the extended space.

Sadly, the 1950s stove that had served them so well had to go as it was too small for the new kitchen. However, a new Smeg range cooker is proving a good replacement.

Once she buys something, it’s there for ever. She has also inherited a lot of pieces, including a favourite crystal chandelier from her grandmother, and a Swedish table and chairs that once belonged to her great-grandfather. These and many other items in the house have a wonderful story to tell, and that’s what matters to these fleamarket fans.

Gwen doesn’t favour any particular brands, but chooses things she likes on their individual merit. For example, often when she buys a paint it turns out to be a different colour than what she had in mind, and she ends up having to mix the colour she wants. Her father was a painter by profession, so he’s always around to offer sound advice.

A lot of the accessories they’ve used, especially in the children’s rooms, Gwen also sells in her online shop ByGeK, which specialises in handcrafted items, bedlinen and accessories for children. In 2001, Gwen and partner Karen Huys started selling personalised mini suitcases and the business has since developed to sell signs, t-shirts and tote bags. Gwen is proud that they still design and make everything themselves in their workshop.

The old farmhouse always looks good when it’s decked out for a celebration – whether it’s a small family birthday party or a big get-together with
all their friends.

At Christmas Gwen likes to keep things natural, pretty, and fairly low key, with soft candlelight, fresh greenery and vintage decorations that have been in the family for years. ‘I am not a big believer in turning my house upside down to decorate it for Christmas and the New Year,’ she says. ‘I think it’s cosy enough all year round!’