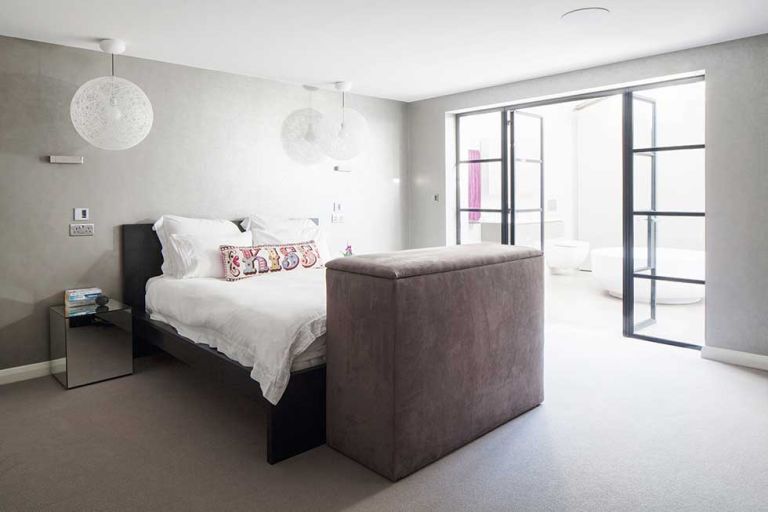 The owners: Danielle Kingdon, a solicitor, and husband Russell Dawkins, an optometrist, live here with their daughters, Lily, 14, and Amber, 11

The property: A four-bedroom apartment over two floors in a converted Victorian power station in west London

Danielle and Russell were no strangers to this apartment, having visited it when friends’ parents were living there. They had never imagined it would become their home, but when Russell had a terrible cycling accident in June 2013 that left him in a wheelchair, they had to think fast.

‘We were living in a Victorian property over seven floors,’ says Danielle. ‘Then our friend told us his parents were selling their apartment. All of a sudden the answer was in front of us.’

The apartment is an unusual find; sat at the top of a Grade II-listed former power station built in 1901. Its conversion into flats was completed in the 1980s, with this one being spread over two floors. When Danielle and Russell bought the property in October 2013, few changes had been made since then: the entrance opened onto the lower floor, reserved for bedrooms and bathrooms; and stairs led up to a separate kitchen, dining and living room, and opened onto the roof terrace. There were two balconies overlooking two of the downstairs rooms, and a mezzanine level. A lattice of architectural steel beams branched out from the centre of the vaulted ceiling, but some had been boxed-off or were hidden by dividing walls.

Find out what they did next, then browse through more real home transformations and learn more about renovating a house in our guide.

The biggest challenge was working out where to put the lift. ‘Russ needed access but we still wanted our home to look stylish,’ Danielle continues. Finding enough height for the lift shaft was key. Fortuitously, the front door opens into a spacious entrance. This wall forms the highest point upstairs and so became ideal for the lift. A mezzanine study  arches over the Trio lift from Stiltz, which is discreetly placed behind kitchen wall panels

A tip-off from specialist accessible bathroom designers, Motion Spot, helped her to make the final decision. ‘They told me about this lift – it’s one of the smallest ones on the market and is really discreet,’ says Danielle. ‘Sarah and I hatched the idea of incorporating this within the kitchen units to disguise it.’

Downstairs, plans were made to increase the width of the hallway to accommodate the lift.

With Russell still recovering in hospital, Danielle drew on the help of her friends, interior designer Sarah Hubner-Clarke, and builder Larry Frankum. ‘We took out all of the walls on the first floor and made it into one big, open plan space,’ says Danielle. ‘Downstairs we tweaked some of the walls to make bedrooms and bathrooms slightly larger.’

With no major alterations needed, the project didn’t need an architect or planning permission. The couple had a budget of around £400,000, with Larry project managing and keeping them abreast of cost options. Larry’s team got started in February 2014.