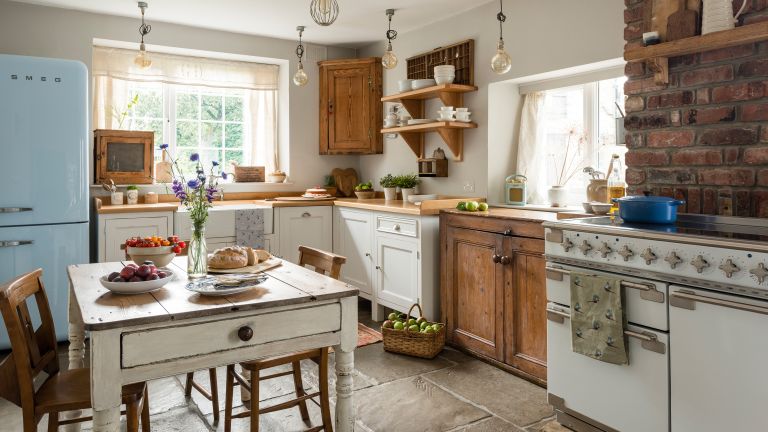 Looking for inspiration for renovating your period home? Amongst our home transformations is this beautiful listed stone cottage in North Yorkshire, which had water streaming down the gloss-painted walls and wringing wet carpets when Gemma and Doug first went to view it.

The property:  A Grade II-listed three-bedroom cottage in a conservation village in the North York Moors. The original cottage dates back to the 1700s, but the kitchen and dining room were added in the 1800s. The garage arch is from the 19th century, with the top part being converted into a bedroom in the 20th century

What they did:  They stripped the walls, exposed original floorboards, replaced kitchen and bathroom fittings, painted beams and laid new flooring

It would have put off most people, but the structure of the building was sound and the garden included stabling for horses – a huge bonus for Gemma, who is a keen rider – plus a barn that had been converted into accommodation.

‘We saw potential in the cottage and realised we could live in the barn while we did the renovation work,’ recalls Gemma. ‘We loved its location and character, so we bought it. It was a gamble – and it turned out to be quite a stressful project.’

The challenge began as soon as they moved into the barn and realised it was almost as damp as the cottage. But it only spurred them on to complete the work to the cottage before winter set in. ‘The damp was definitely the biggest issue,’ says Gemma. ‘We think the walls had been glossed to make them easier to clean, but it actually created more moisture as the thick walls couldn’t breathe, and old cottages like this need good airflow.’

Their first – and very laborious – task was to strip all the paint off the walls, which came away in sheets. They then opened the doors and windows and turned on the heating to allow the cottage to dry out over a period of six weeks.

While the property started to breathe again, they took up three layers of soaking wet carpet in the kitchen and removed the living room carpet to reveal the original wide-plank floors, which Doug sanded by hand to maintain the character.

The kitchen floor, meanwhile, was covered with firmly stuck-down lino squares, which despite the couple’s efforts wouldn’t budge, so instead they spent hours researching stone floors to complement the original flags in the hall.

‘We found a company in Bath that could create cement casts of original Victorian paving stones, which we have used for the kitchen, dining and boot rooms,’ says Gemma.

Upstairs, the floors were no better – old underlay had rotted into every crack and crevice of the floorboards, and had to be painstakingly removed with knitting needles.

The next major job was painting the beams, which were so heavily varnished that they looked dark and overbearing. Doug covered them with easy surface prep, and then painted on five coats of Farrow & Ball Casein distemper to get the desired finish. ‘We wanted to do the best thing, but in hindsight we should have just primed them.’

Once they had finished decorating the cottage from top to bottom, the couple were able to move in. Although even that was not without a few problems: ‘We soon discovered that it’s almost impossible to get anything up the stairs that won’t come apart,’ says Gemma, ‘and we have had to redecorate the stair walls after scratching them when we carried up the beds.’

Most of their old furniture is now in storage or has been given away, leaving them to buy pieces more suited to the period property. ‘We pick up pieces from all over: car boot sales, antiques shops and places we discover on our travels. One of my most expensive purchases was a carved French bedhead, which now hangs on the wall over our own bed,’ adds Gemma.