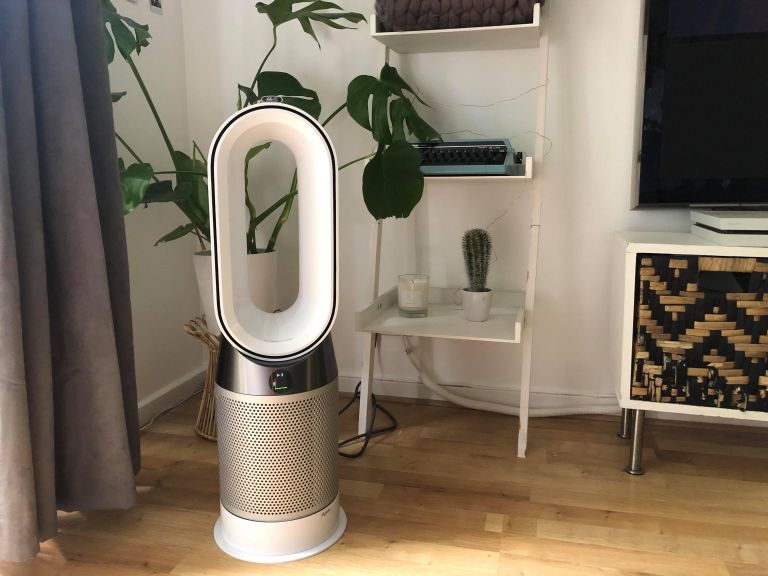 The Dyson HP04 Pure Hot + Cool ticks all our boxes. It's a good looking piece of kit that effectively cools, heats and purifies the air in your home. Smart home fans will love that it can be controlled via Alexa or your smartphone. We just wish we could afford one for each room.

The Dyson HP04 Pure Hot + Cool is a smart piece of kit that works as a fan, a heater and an air purifier. As you'd expect from such a smart-looking piece of kit, it's compatible with Alexa-enabled devices, and can be controlled by voice command. What's more? There's a Dyson app so you can control it from your smartphone, too.

Now we're heading in to the summer months the fan and air purifier could help you keep your cool whilst working from home, or home schooling. And, because it's also a heater, it will be a good piece of kit to see you through autumn and winter, too.

We gave it a thorough testing to see whether it stood up to the hype. In a nutshell, we really liked it. So, if you're convinced already, click on the link below to buy now. Otherwise, read on to find out more about this clever little buy.

Who will the Dyson HP04 Pure Hot + Cool suit?

Anyone and everyone, no matter the size of their home. It's great used as a fan in a hot bedroom at night, or if your living room is feeling nippy and you don't want to turn the heating on all over the house. It's a great buy for smartphone owners, too. While the Hot + Cool's remote works perfectly well, the app you can download onto your phone is even better, allows for more functions and is easier to use.

How easy is the Dyson HP04 Pure Hot + Cool to use?

Using the machine is pretty straightforward. You can power it up by pressing the button on the device, on the remote (above) or via the app on your smartphone remote (below left).

After that, the Dyson Pure Hot + Cool begins purifying, and expelling either hot or cold air. In cold months, you can set your required room temperature and the fan will maintain it; during warmer months, you can use the fan mode to set its speed to suit your preference.

And, you can see room temperature and air quality stats displayed on a circle screen below the power button, too. We explain more about these below.

In terms of cooling, it's worth remembering that a fan's job isn't to lower the temperature of a room, but to shift air onto you, creating a cooling effect. The fan function does a pretty good job of it, and we did find that having the cooling mode on at fan speeds five and six quickly made us feel cooler.

As for heating a room, it does a rather spectacular job in a short space of time. Our living room is around 6m x 5m and is well insulated; within just 10 to 15 minutes of use, the Dyson had got it to our preferred temperature – and, thanks to the insulation, that's all we needed all evening.

Let me give you an example: at 23:03, I turned the heater function on, setting the desired temperature to 25°C (toasty). The room temperature at that point was at 22°C and the PM2.5 (air pollution, more on that below) at 44 (see pictures, below left). Within four minutes, we began to feel the heat and the PM2.5 had dropped by four (below right).

Let's talk air purifying: unlike basic fans, which just move air about, the Dyson Pure Hot + Cold purifies the air. We've recently had our living room painted and it shows up on the VOC stats after a day or two of not having our back door open. With doors open and before having the room painted, the stat was at one; just after the decorating, it had reached four. After a couple of days of us being out at work and doors and windows being shut, the Particulate matter (PM2.5) number was up to 15; after an half hour of using the air purifier function, it was back down to two.

What about air purifying and cooling together? One morning, I set the machine to purify and cool our (15sq m) bedroom. At 8am, our bedroom was 22ºC (the window had been shut all night and we'd been hot), and the PM2.5 was at 87 (35 and under is good) and the PM10 (dust, mould and pollen) bar was full, while the VOCs (from cleaning products, paint and new furniture) was low (see picture, below right). At 8:17, I sprayed some deodorant and perfume in the room, causing it to change to 'Extremely Poor', with 166 PM2.5, causing the screenshot (below right). You can see that the VOC rating shot up immediately by a few bars, as well as the PM2.5.

After leaving the fan to do its thing for 17 minutes, the machine managed to get the PM2.5 and PM10 ratings down by quite a lot (see, at 8:34, below left); the PM2.5 dropped from 166 to 28, which is classed at good. However, the VOC rating persisted to stay the same, causing the overall air quality to be rated as fair until 08:49 (below right). This means the fan took 49 minutes to change the air quality in our bedroom from 87, with a deodorant-induced hiccup in the middle, to 18 – that's a decrease of 69. Not too shabby.

It's also worth noting that during this time we had no windows or doors open.

How else did we use this machine? We live in a flat and don't have a tumble dryer, therefore dry clothes inside while we're out at work. The built-in purifier works a treat and the relative humidity stats are extremely helpful.

What else did we like? While it can be moved around with the remote, you can also direct the airflow up and down by hand to suit your needs.

We didn't use the remote control (pictured above) very much as we mostly controlled the Hot + Cold through our phones or via Alexa, which we found more user-friendly. However, it's pretty simple to use. There's a power button at the top and an information button next to it which changes the stats displayed on the machine's mini screen (you can see all the stats listed below).

You can use it to control airflow speed, ranging from one to 10, and set room temperature between 1°C and 37°C degrees. The auto button will turn the machine on to a speed that's right for the room (pre-set by you).

The blue dot enables cool mode. The two arrows turn oscillation on and off – you can choose between it moving 45, 90, 180 or 350 degrees. There's an airflow direction button, and you can choose for the airflow to be pushed out the front or the back of the machine. The timer button allows you to set the fan to run for 30 minutes, or one, two, four or eight hours, after which it will turn off automatically. The night mode sets the Hot + Cold to quiet mode and dims the LCD screen.

Last but not least, the compact and slim remote control is magnetic, and can be attached to the top of the machine to ensure it doesn't get lost. Handy.

An extremely easy to use piece of software, the Dyson app is one we couldn't fault. Simply download the app, then pair it with your Hot + Cold; you'll be greeted with the home screen (see green screen, above right).

Once you've input your location, you can see the AQI (Air Quality Index) outside: low being the best and very high being the worst. You can also see the outdoor temperature, the outdoor humidity and pollen levels displayed. The data collects the dominant types of pollen in your region (mine was tree and grass pollen). It then shows whether the count is low or high.

Below that, in a highlighted house shaped box, you can see what the air quality is like inside your home. The scale ranges from severe to extremely poor, very poor, poor, fair and good. The latter means there are very low levels of microscopic particles and VOCs in your home.

Underneath the AQI you will see temperature, humidity and PM2.5. Then, there's the display of daily and weekly averages of all stats so you can easily compare.

To the bottom left of the screen there's a button to open up the smartphone remote. The remote (black screen, above left) has all the same functions as the physical remote, but it's easier to use – and the timer can be turned on for nine hours instead of only eight.

At the bottom right of the screen, you can schedule the Hot + Cold to turn on and off. This is where it gets (even more) interesting. As long as your Dyson Pure Hot + Cool is plugged into the wall, it can control itself once you've scheduled it to run on at certain times on certain days. You can choose from morning, evening, night or all day and then the days of the week, the start and finish time. You can control its every move with the app, not just timings but right down to choosing whether you'd like it to be on Night Mode, how you want it to oscillate and what direction you'd like the  air to flow.

Say 'Alexa, turn Dyson Purifier on', and it will. You can line up Alexa to change any of the Dyson's settings, too, such as to enable oscillation, increase temperature, set a target temperature and more.

Another thing you can do is ask your Alexa-enabled device for feedback from the fan. It can then tell you what the air quality is like both indoors and out, as well as the humidity level and other stats.

You can also ask Alexa (and this is one of our favourites) how long the filter has left before it needs replacing. How smart is that?

Alexa isn't just useful for controlling the machine, but also useful for when there's a problem with it. Simply say, 'Alexa, ask Dyson if there's a fault', and you'll get the info you need.

Unlike many other fans, heaters and purifiers, the Dyson Pure Hot + Cool looks pretty swanky. It's also quite small at just 76cm high, making it ideal for those who don't fancy having a huge towering machine in their bedroom or living room. It is however, a bit bulky in comparison to Dyson's other models, such as the AM07.

The machine arrives fully assembled, bar the filter inside, the only part which needs to be set up. The filter comes in two different parts – one (blue) made from activated carbon to trap gases, and another (purple) HEPA filter to remove allergens and pollutants as small as 0.1 microns.

When it's time to change your filter, you'll be informed via the app; they usually have a life of around one year, depending on use. You can check the remaining life on your filter in the settings on the app, too.

Definitely. It works really well, makes itself invaluable by doing more than just expelling cold air, and the smart capability makes it just that bit more user-friendly. We loved being in the kitchen and asking our Alexa Echo Show to turn on the fan so that our bedroom temperature would be just right for bedtime.

What didn't we like about the Dyson HP04 Pure Hot + Cool

If you don't have a smart phone you won't get the best out of this fan/heater/air purifier. Plus, it's pretty pricey. That being said, it does do three jobs in one neat package.