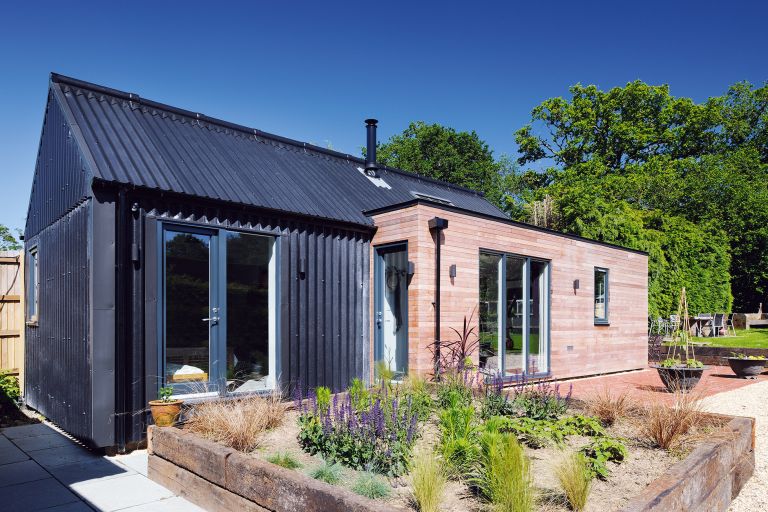 The renovation of the run-down two-room gardener’s cottage in the grounds of Daisybank Cottage – an Arts and Crafts house converted into a bed and breakfast in the New Forest National Park – has been ‘a saving grace for our family’, says owner Cheryl Maher.

It might sound like an overstatement for this small-scale project; however, Cheryl and Ciaran’s daughter Kellie is receiving ongoing medical treatment for late-stage Lyme disease and requires regular use of a wheelchair. Reviving the fortunes of the run-down annexe has provided her with an ‘oasis’ where she can live as independently as possible.

Find out how they created it, then browse through more real home transformations and learn more about extending a house. Find out, too, how to add an annexe to your home.

The project is a result of the family’s bed-and-breakfast expansion, which meant that Kellie and her brother Alan didn’t have enough space when they returned home during university breaks. For several years, the pair had often used the old gardener’s cottage, which comprised compact living accommodation alongside a horse-and-trap shed, as a place to sleep. However, the cottage was dark, damp and uninsulated – making it freezing cold in winter and too hot in summer – and so was not good for Kellie’s health. Consequently, the decision was taken to transform the cottage into a two-bedroom retreat for the young Mahers.

In 2012 Ciaran and Cheryl approached local architectural practice PAD Studio to redesign the annexe, after seeing its award-winning conversion of Warborne Farm, just outside Lymington, into luxury self-catering accommodation.

Architect Wendy Perring says that the project captured her imagination from the start. ‘I love taking on quirky challenges and, inspired by Kellie’s bravery and determination, I set out to create something special on a tight budget.

‘I wanted to make the most of the small rooms and introduce long views through the building to make it feel more spacious. Kellie’s main wish was for a bedroom that was flooded with light, with an area for a desk near the window, a terrace where she could grow fresh vegetables and flowers, and a bathroom with a luxurious feel.’

Also central to the project was upgrading the building’s thermal performance, while retaining the simple and rustic qualities of the cottage. Fortunately, the New Forest National Park Authority planners were receptive to the design, as it made such close reference to the original building.

The cottage’s existing concrete foundations were retained, but the structure has been completely rebuilt. ‘The original plan was to retain the back wall, but once the rest of the cottage was taken down, we were able to see that the existing brickwork was in a shocking state, so we had to take it down,’ explains Wendy.

‘However, this presented us with the opportunity to introduce high levels of insulation in the walls. The new timber-frame structure has profiled cladding made from recycled cement and fibre, which echoes the materials of the old corrugated tin-clad cottage. Ideally we would have reused the tin, but it was so rusted that we decided to replace it.’ (The old corrugated cladding has been recycled as a chicken coop roof.)

As well as referencing the original cottage, the profiled sheet cladding was also an affordable option that is more commonly used in the New Forest for agricultural buildings. It’s offset by local hardwood wraparound cladding, which offers a softer, warmer contrast to the sharper, colder metal. A further homely touch is the surrounding garden, which has been landscaped with a contemporary scheme to enhance the relationship between the cottage and the main house.

Many of the walls are clad in timber panelling internally, which adds a sense of traditional craftsmanship to the project. Kellie’s bedroom has windows facing south and west, ensuring that she has plenty of light, with French doors opening onto her own private terrace. The living area and Alan’s bedroom are vaulted to create a sense of drama, and a mezzanine home office with a small window allows for extra flexibility when friends visit.

The cottage is perfect for the siblings as it can be used either as a single entity or as two separate living areas, each with their own entrance. ‘The accommodation for Kellie is all on one level and everything is wheelchair-friendly,’ says Cheryl. ‘The cottage feels so spacious, and the rooms have pocket doors, which help to create a sense of flow. To avoid clutter there’s a great storage area above the bathroom.’

The build process went remarkably smoothly and took just four months — from December to April. During the project, Kellie and Cheryl visited Brussels for an intensive course of treatment for Kellie, and communicated ideas with Wendy via Pinterest. ‘Cheryl also scoured the wonderful fleamarkets of Brussels, so she was constantly sending through images of things that she had seen, to see if we could incorporate ideas. It was a very creative process,’ says Wendy.

The building was completed a few days before Kellie’s return from treatment, and she cites the renovation as a major driving force in her determination to pull through four months of hospitalisation. ‘When she and Cheryl arrived home and saw the completed cottage, Kellie could not believe that her ideas had become reality,’ continues Wendy. ‘Filled with light, and enjoying a direct relationship to the outside world, Kellie’s new living space gives her the independence that she craved and has enabled her to enjoy her freedom for the first time in many years.’

Though she is still undergoing treatment and will be recuperating for many months to come, Kellie believes that this beautiful environment is enhancing her wellbeing. ‘The cottage has given us a way forward,’ concludes Cheryl. ‘It says so much about the healing power of good design.’