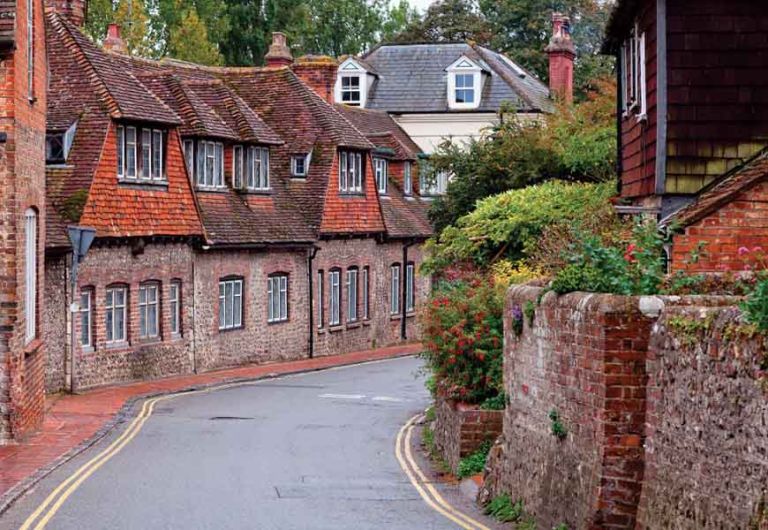 Whether you should repair as opposed to re-tile an external wall depends on the extent of deterioration. Good tile hanging should last for many years but will eventually fall into disrepair. Fixings and their supporting timbers usually begin to fail before the tiles themselves and once repairs to these are no longer cost-effective, re-tiling will become necessary.

The mellow colours and gentle unevenness of vertically hung tiling, which comprises plain roof tiles or decorative versions, provides an attractive cladding for many old walls and other upright surfaces. Initially devised to protect timber-frame buildings from bad weather, particularly driving rain, the use of vertical tiling increased from the late 17th century after roof tiles became more readily available.

Often the tiles are restricted to the upper storeys of buildings and sometimes just gables – the most exposed areas. Tile-hanging is especially characteristic of Kent, Sussex and other parts of south-east England. Found also on brick and stone buildings, its use became more prevalent elsewhere in the country during the 19th and 20th centuries. Tiles with decoratively shaped lower edges were particularly fashionable at this time, including those shaped like a half-circle (sometimes described as a fish-scale or scallop).

Historically, vertically hung tiles were held by wooden pegs and bedded on lime mortar. The mortar filled the small gaps not closed by the tile laps behind, and stopped the tiles moving (or “chattering”) in the wind. On walls exposed to strong winds, tiles were set more closely together without mortar.

Modern practice is to twice-nail or screw each vertical tile into place. They are generally fixed to sawn softwood battens or boarding (sheathing). Battens, like the tiles themselves, can be fixed with either nails or screws. When tiling a brick wall, corrosion-resistant fixings are secured to timber pads set into bed joints or into drilled and plugged holes.

From time to time, broken or missing tiles will require reinstating. This involves removing the tiles directly above them, top downwards over a V-shaped area, and inserting suitable replacements. The new tiles should match the type, colour, texture, size and thickness of existing ones. Fixings into existing battens should be made using new holes or larger diameter screws or nails. Any pointing or mortar fillets will also need attention periodically.

When completely re-covering a roof, as many of the original tiles as possible should be included. Avoid using second-hand plain tiles salvaged from other buildings. Substitution with concrete tiles is not recommended nor, generally, is replacement of handmade plain tiles with machine-pressed ones (or vice versa). Depending on the circumstances, new tiles can be mixed with old ones across the roof or reserved for less prominent slopes.

Occasionally it may be acceptable to introduce modifications but the emphasis should be on matching existing details. It is best to use cover battens or mitred (butt) joints at corners rather than purpose made angle tiles on buildings predating the late 19th century, and also mortar fillets instead of lead flashings.