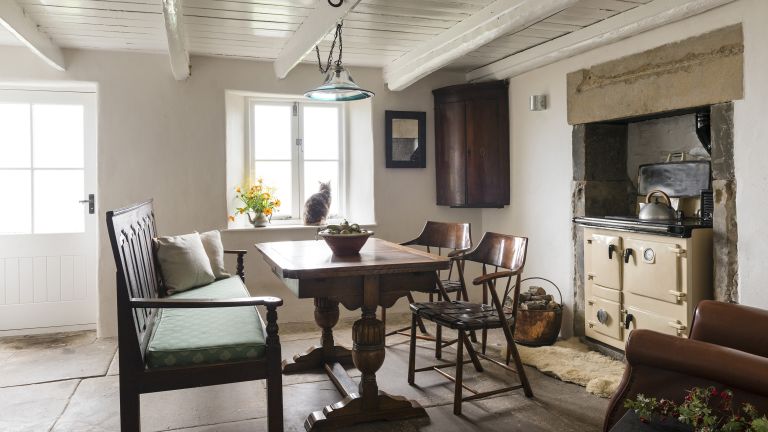 Aside from the treasure houses of Britain and the grand country estates it's not often we come across properties that have been in the same family for 300 years, so when we heard about Lis Boyle's renovation of the home that has been in her family for over three centuries we just had to take a visit. Modernising period homes whilst protecting their cherished character is a difficult task, but the Boyle family have struck the perfect balance and the results are beautiful.

Perched on a hilltop in the beautiful Peak District National Park, with breathtaking panoramic views across Hope Valley, Paradise Farm certainly lives up to its name. Boasting plenty of original features, the humble stone farmhouse would have captured the imagination of any young family in search of a home, but for Lis the property had a deep-rooted connection which made it the perfect choice.

Browse the rest of our real home transformations. Read our guide on renovating a house, too, for more guidance.

Owners  Elisabeth Boyle, a farmer, lives here with her husband John, a partner in a safety at height business, their two daughters, Josephine, 14, and Eve, 12, Bedlington Terrier, Nuzz, and cat Silky.
Property  A 17th-century three-bedroom farmhouse with 18th-century additions, set in 50 acres of farmland in the Peak District.
What they did  Lis and John reinstated rooms to their original sizes and stripped back walls and ceilings to reveal original materials and features. They also insulated the loft with sheep’s wool, installed central heating, rewired, repaired old lime plaster and redecorated.

‘Having been born in the farmhouse and brought up on the farm, there was a sense of history and belonging, that for me was hard to ignore,’ says Lis.

‘My ancestors have farmed this land for 300 years. They made their journey south from Lerwick on the Shetland Isles somewhere around the late 1600s and ended up at the farm by the early 1700s. The old deeds show that they leased the farm from the “Countess of Mazareen” and later bought it.’

At the time Lis was born, the cottage had been split into two by adding extra doorways and stud walls; Lis’ great-uncle Merlin lived in one half, and she, her sister, mother and father in the other. The house remained as two for over 30 years, but was later reinstated as one by her parents, albeit retaining the extra doorways and studwork. It was not until the birth of her first daughter, Josephine, when Lis and husband John had been living in the nearby village, that they considered buying the farm.

Six years later, in 2011, with the cooperation of other family members, the couple purchased the property, while Lis’ parents moved into a converted barn next door. With her parents’ guidance, Lis now runs the farm, which includes 70 sheep and lambs, five Shetland cattle (a native breed) and chickens.

Lis and John had always intended on renovating but, in order to better understand their needs, made the sensible decision of living in the house for four years before embarking on a remodel.

While the property’s exposed location was part of its appeal, offering stunning, sweeping vistas, it meant that building work had to be carried out during spring and summer. In 2016, the family moved out from April until September while four builders worked full-time on the renovations.

‘We had to ensure the external work was completed by October as the weather in November can be wet, windy and cold,’ says Lis. ‘I was there daily ordering materials, going through plans and generally trying to keep a few steps ahead.’ The couple helped do much of the mundane manual work, such as digging out rubble from the cellar, clearing the loft and laying wool insulation.

In order to create the new family-friendly layout, the property was completely reconfigured. Downstairs, four feet of wall that divided the former parlour and sitting room was knocked through to create an open-plan kitchen-diner. ‘The gap required four RSJs as the wall had originally been an exterior wall,’ Lis remembers.

The former kitchen, which was historically the shippon or cowshed, was converted into a sitting room-cum-snug. The stairs were reinstated to their original position and upstairs the stud walls added in the 1960s were removed to return the bedrooms to their original size. Wallpaper was stripped back throughout to reveal original lime plaster, and false ceilings removed to expose characterful beams. Walls that had to be taken back to stone were replastered using lime and hemp.

Need to repair plasterwork in an old home? Check out our guide to plaster in old homes.

One of the biggest challenges was how to incorporate a family bathroom. With the help of an architect Lis and John came up with the  ingenious plan of building a bathroom into the corner of the master bedroom; a solution that respects the integrity of the house by distinguishing old from new. ‘It was designed to be a cube in the space and intentionally stands apart from the king truss, allowing the beams to be viewed from both ends of the room,’ says Lis. The couple opted for
a simple wet room design, ensuring a suspended floor was laid to support the weight.

This pared-back approach runs throughout the interior in a conscious effort to do justice to the farmhouse’s stunning rural setting. ‘We wanted the interiors to reflect the simplicity of the building,’ says Lis. ‘The house needed to feel cosy, but have an uncluttered look incorporating antique and modern furniture.’ Furnishings are limited to beautiful, essential pieces, so as not to obstruct the glorious views of the valley, but also to create an overall feeling of calm. ‘It allows your eyes to rest on one thing at a time, so that you can really notice things,’ Lis explains.

To pay homage to the history of the farmhouse, Lis chose to retain several of the timber furnishings and, where new pieces were required, has taken time and care to source high-quality, handcrafted designs from antiques centres or has had pieces specially made to their requirements. ‘We love wood and craftsmanship, whether old or new,’ says Lis. ‘John has an interest in woodworking and has made several pieces for the house.’

Although their home is firmly rooted in the past, Lis and John haven’t been afraid to embrace change, and Lis’ parents, too, have enjoyed seeing their vision come to life. Next on the agenda is to extend outwards to create a new sitting room and with it a new chapter in the rich history of Paradise Farm.