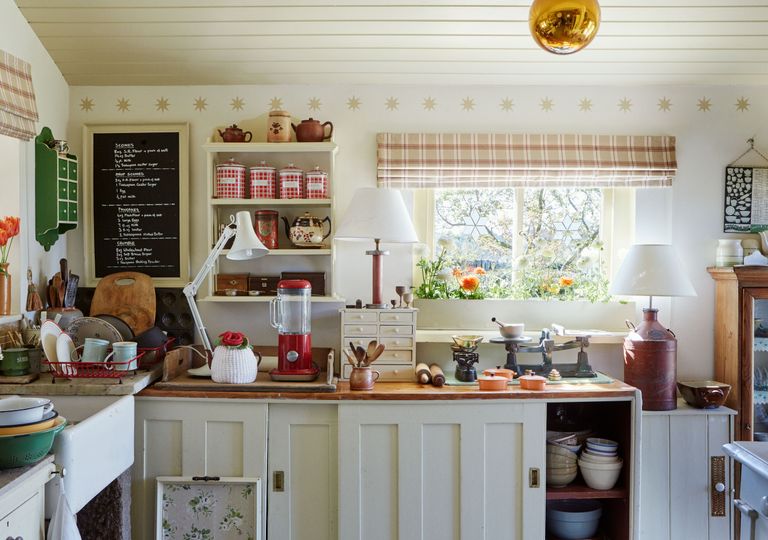 For more real home transformations, head to our hub page or subscribe to Period Living magazine and get tonnes of inspiration and advice delivered straight to your door.

'Houses should reflect the fact that you age,’ says Albert Weir. ‘Blemishes and wrinkles will appear over time. I don’t mind mine being slightly worn and lived in. I’m a conservationist and feel very strongly that we shouldn’t be wasting resources constantly changing things. A house and its furnishings very much reflect you as a person, and this is why I don’t do a lot of decorating, even though it may look as if I do.’

Owner  Antiques dealer Albert Weir, owner of Vintage at the Tower and Living at the Tower, lives here

Property  A three-bedroom former forestry cottage in Northumberland, built in the 1920s

What he did  Since moving here in 1985, Albert has installed a staircase and converted the attic space into two bedrooms, extended and refitted the kitchen, added a porch and entrance hall. He also refitted the bathroom, extended and landscaped the garden and built a summerhouse and workshop, garage and garden shelter

‘It’s one of the best places to get the whole view of Northumberland in one look,’ he points out. ‘Even when it’s not particularly clear I can see north to the Cheviots 60 miles away and Hadrian’s Wall is about 20 miles from here. It is incredibly exposed. It’s very rare that there is not a breeze or a howling gale blowing, so a day when there is not a breath of anything moving is exceptional.’

It was on one such paused and beautiful June evening, when those sweeping views could be taken in at a glance, that Albert first saw the cottage, tipped off that it was about to go on the market by a friend who drove the mobile library and knew her patch well.

‘All it had were four square rooms, all on one floor – that was what standard forestry cottages were,’ says Albert. ‘It was very modest, but with so much potential. When I looked through a hole in the passageway ceiling, I could see that the loft matched the floor area and the roof pitch meant there was plenty of height up there for two double bedrooms.’

That was the first project he tackled, building a staircase up through the core of the space. Over time, helped by a builder friend, he has extended the original kitchen, added a new porch and entrance hall, landscaped the garden and built a workshop, summerhouses, and a garage.

Long before he began trading in antiques, Albert’s practical skills and tastes were shaped by a childhood on a Cheshire farm and years he spent as conservation officer for the Northumberland National Park. ‘Craftsmanship is very important to me,’ he says. ‘We were a farming family, and a farm is an incredibly good school to be taught every skill imaginable, from horsemanship and veterinary to joinery, carpentry and gardening. It is a fantastic academy.’

Inherited and found objects have steered his redesign. The new entrance hall faces directly north and is based on the scale of an heirloom dresser and a huge window he spotted when visiting a big country house in his work for the National Park. ‘They’d knocked down a surplus wing,’ he says, ‘and this lintel and quoins were lying on the ground.

I just happened to ask if they were for sale. It basically capitalised on the wonderful view that you get from the garden but weren’t getting from the house. By setting it at floor level, and it being a tall window from a much grander house, it gave the wonderful aspect to see the 60-mile, 180-degree view.’

A subscription to Period Living provides you with all you need to know about caring for and improving a traditional garden – and also how to decorate, renovate and maintain a period home.

Northumberland is very similar to Sweden and Norway, to Scandinavia generally, more than many counties in England. It has the same light and the same rural greenness about it, and grey skies off the North Sea. And then I find English style pretty, comfortable and warming. This house is a melting pot of all three. The gingham is essentially Scandinavian, the enamel is French, the china English.’

And having established his style, his practice is for low-key maintenance, with two important exceptions. ‘Other rooms I’ve allowed to age and develop a patina like you would a piece of furniture,’ he says, ‘but the kitchen and bathroom are high-traffic areas and do need redecoration more often.’ Even there, he keeps to the tried and tested ideas: his new Rayburn is an updated version of his last.

It is his magpie eye which makes his home so appealing: everywhere you look are interesting antique and vintage finds, loosely linked by colour or craft. ‘I don’t have extensive collections, he says, ‘or go to the ends of the earth, every auction or the internet to search for a particular piece. I just like things that have a bit of history and I have got a very good memory for colour and detail – I can see something and think: “That will complement that display”. I’m not buying from scratch to furnish a house, just adding little gems to it.’

The end result is a home that reflects his interests entirely. ‘Because I live on my own I can do exactly what I want with it,’ he says. ‘It has evolved and now it’s a rewarding experience to live here. I love it, and even though it is a big cottage for one person, I have no plans to move. I want to spend a few years benefitting from all the work that has been put into it, to sit back, relax and mellow a little.’