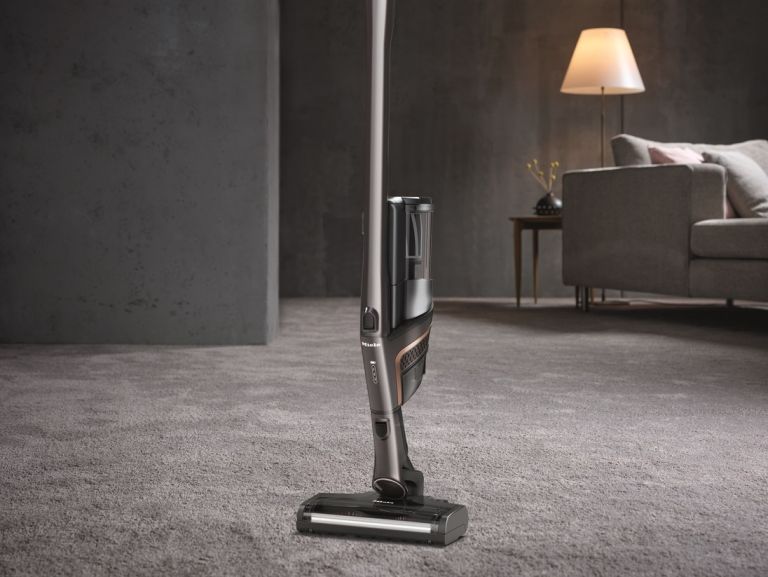 It may be expensive and a touch on the heavy side but when it comes down to decent, deep-down cleaning performance, the Miele Triflex HX1 Pro is a force to be reckoned with. Incredibly, that suction power, which is easily on par with a high-end corded vacuum, is achieved without sacrificing battery life. The HX1 Pro lasts longer than anybody should ever want or need to clean. If you’re done with running out of juice before the job is complete, this is the cordless for you.

Vacuum nerds have been eagerly awaiting the Miele Triflex HX1 Pro – Miele’s first foray into the cordless stick vacuum market – but does it live up to the hype? What could be perceived as a little late to the market, we’re here to give you the lowdown on this new flexible friend so you can decide if it’s been worth the wait, and if it's worth the spends.

Keep scrolling to read the full review to see if it this is the cordless vacuum you’ve been waiting for, but if you want to see more great options check out our best vacuum cleaner guide for more top vacs, at the best prices.

Who will the Triflex HX1 Pro SMML0 suit?

What is the Miele Triflex HX1 Pro like to use?

There’s a big clue to the Triflex HX1 Pro’s main USP within its name. Yup, it’s flexible, 3-in-1 design solves multiple cleaning conundrums. Got lots of leggy furniture to clean beneath and more spiders than teaspoons? Use Range Mode, which has the power unit at the top, allowing the floorhead to slide under furniture with ease. Switch the floorhead for a nozzle to blitz cobwebs up high, and any tricky to reach orifice. This was my preferred configuration as we have plenty of furniture to get under (and far too many cobwebs).

Need something lighter and a bit more manoeuvrability? Flip the power unit to the bottom, called Comfort Mode, for a significantly lighter load (as you’re not carrying the weight of the power unit). This configuration also allows the cleaner to be parked upright, without falling over. This feature is really useful if you need to stop briefly to move a rug or chair. I didn’t like not being able to get under our sofas or island stools though. The final Compact Mode is essentially a handheld, using nozzles attached to the power unit or the floorbrush, which is great for cleaning the stairs, car seats etc.

As mentioned, we have pretty much all the main flooring types possible in our house and the Triflex HX1 Pro cleaned them admirably. It did its best work was on carpets, where the powered brush floorhead did a fine job on dust, feathers, dog (and human) hairs. This vac automatically detects when it’s on carpet and bumps up the power - you can feel, and hear, the extra suction come into force, which is very satisfying.

It was less keen to take on small objects like cereal or rice on our hard kitchen floor but after a couple of extra swoops it would stop pushing them about and swallow them up like a good boy (the masculine design definitely marks it a boy). The bright light on the front of the floorhead is very handy for ensuring nothing gets left behind in darker corners or under chairs. The brush roller inside the floorhead is also really easy to remove for inevitable hair removal, just flip a catch at the side and slide it out.

Although there are three power modes, easily adjusted via a slider on the handle, I only ever switched out of top power to do our doormats, which need gentler suction or they ruckle up. In my opinion, the only other reason not to clean at full bore (and suck up maximum dirt) is to conserve battery life. But as the HX1 Pro comes with an extra battery pack, there’s really no need. It’s worth mentioning that the 60 minute battery life Miele claims is in low power without the electric floorhead. I guess you could use this cleaning a big family car. In my preferred High Power, using a mix of the electric floorhead and crevice nozzle, I could easily get 25 minutes out of each battery and always ran out of surfaces to vacuum, or the will to live, before I ran out of power.

If your house does take longer than 50mins to get around you probably live in a mansion so why not invest in a third battery pack? Performance-wise, the Triflex HX1 Pro did a better job than our corded vacuum. I know this because I cleaned the ground floor with the corded and then went back over it with the Triflex HX1 Pro and was horrified by how much dirt was in the dirt cylinder. It was particularly effective on the deep pile rug in the kitchen, sucking out dust that had probably been lurking deep down for months. Shudder.

Now this is where the HX1 Pro let itself down (and the reason I gave it four, instead of five stars). With a paltry capacity of just half a litre, the dust cylinder is annoyingly small and needs emptying far too often. The emptying action is easy enough, if a little stiff. You twist the lid once to detach from the power unit, again for the bin lid to pop open, and a final twist will see the whole unit come apart so that everything comes out.

Putting the bin back on is also stiff and I often needed to bear my full weight on the bin before I hear the click that tells me it has successfully redocked.

Filter cleaning – the filter is meant to pull out of the top of the cylinder – required the muscles of Popeye, and often landed me in a cloud of dust when I finally managed to pull it out. The action got slightly easier with repetition, presumably the plastic connections are relaxing a little, but I lost several fingernails in my determination to remove the filter without having to call my husband for help.

The Triflex HX1 Pro comes with three attachments; a crevice nozzle, dusting nozzle and upholstery brush, all with a home on the wall mounting unit. Not terribly exciting but it covers all the bases and you can buy extra accessories, like a longer crevice tool or radiator brush, if you feel the need. If you battle with pet hair you might prefer the Triflex HX1 Cat&Dog model, which comes with an extra motorised floorhead designed for pet hair removal.

The separate charging station with a second rechargeable lithium-ion battery is pure genius. A row of LEDs indicate when the battery is fully charged (about four hours) so, assuming you keep the battery attached to the vacuum plugged in and the spare battery fully charged, you should be loaded with power whenever you need it. I actually found the plug-in cable charger a pain to keep re-connecting (a charger built into the wall mount would have been better) so just used the battery charging station and switched over the batteries when one ran out.

In Comfort mode the Triflex HX1 Pro will stand unsupported wherever you choose to stash it, which is handy if you’re renting and not allowed to drill holes in the walls. As I preferred it in Reach mode, which definitely cannot stand on its own, I (ahem, my husband) screwed the wall mount to the wall – a very easy process. Gliding the Triflex HX1 Pro into the mount took a bit of practice but I got the hang of it eventually and did love the built-in attachment storage that stows all the nozzles in a nice neat line-up.

I’ve already mentioned that the Triflex HX1 Pro is heavy for a cordless and I genuinely think my arthritic mum (and anyone with significant strength/mobility issues) would struggle. However, it’s no heavier than a corded upright vacuum and weightiness doesn’t appear to impact manoeuvrability. I found it very nimble around furniture feet, and the floorhead gets right into corners and tight to edges. Rarely did I feel the need to switch to a crevice nozzle on skirting boards for example. The handheld, used with the powered floorhead, made very light work of our carpeted stairs.

How does the Miele Triflex HX1 Pro rate online?

On Amazon the Triflex HX1 Pro is rated four or five stars, 59% and 41% respectively (out of 10 reviews – all of which were Vine reviews, which means the product was supplied free of charge). Most frequently noted Pros are battery life and suction (there’s a lot of love for the power of this machine) but there are a few grumbles about the price and fiddly bin-opening. On the Miele website, there are two customer reviews for the Triflex HX1 Pro, both 5/5 and full of praise.

How does the Miele Triflex HX1 Pro rate against similar cordless vacuums?

The closest competitor in this sector would have to be Dyson’s V11, which is lighter and has a slightly bigger dust capacity, but only half the battery life of the Triflex HX1 Pro and, I’ll bet my last Rolo, isn’t as sucky.