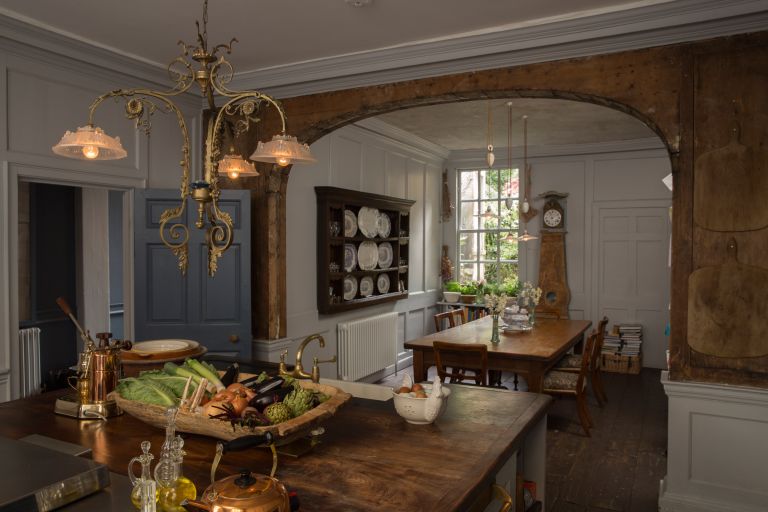 Among English cities, there are few as perfectly Georgian as Bath, and there are few properties that encapsulate the era’s aesthetic as perfectly as the beautiful home that Patrick Williams shares with his photographer wife Neri Kamcili, and their two young children Bonnie and Wren.

Find inspiration for your own renovation project with more of our stunning real home transformations. Read our guide on renovating a house, too, for more guidance.

Owners Patrick Williams and his partner Neri Kamcili, live here with their two girls, Wren, four, and Bonnie, 18 months.
Property A Grade II-listed, four-bedroom Georgian townhouse in Bath, dating from 1748.
What they did Full refurbishments, including restoring and exposing original floors, walls and ceilings, and period features. They replaced rotten floor joists and added a new kitchen and two new bathrooms before redecorating.

The property’s Georgian credentials are impeccable. Situated at the historic heart of the city, it is one of an elegant row of townhouses built in 1748 by John Wood the Elder, who earned himself the title Founder of Bath, having been responsible for other developments in the city, such as the iconic Royal Crescent and The Circus.

When Patrick and Neri purchased their four-bedroom house in 2013, it had been used as a council department office for decades, and had been owned by the local Freemasons for the past 200 years.

If the property had been crying out to become a home again it couldn’t have found a couple more willing and able to answer its call than Patrick and Neri.

Patrick, who owns an architectural design practice and cites Edwin Lutyens and William Morris among his chief inspirations, completed the renovation of the couple’s previous period home above a Victorian hostelry in Stepney, employing a combination of traditional techniques and architectural salvage reclaimed from local skips.

When it comes to restoration and renovation, Patrick says he has an aversion to incongruity and anomaly. Not a trace of modernity is allowed to jar the period authenticity of the spaces he creates. ‘There are no flat-screen TVs, digital radios or plastic kettles here,’ he says. ‘In fact, in our last home I even decanted the toothpaste into plain artist’s paint tubes!’

It was an estate agent who was already aware of Patrick’s fastidious period predilections who initially tipped him off about their current home, and only days after his second daughter had been born Patrick found himself on a train from London to Bath, took one look at the dilapidated five-storey property and made an offer literally on the threshold.

Yet even with his impeccable track record and credentials, Patrick freely admits to underestimating the magnitude of the project he was about to undertake here.

‘It was ironically fortunate that the place had been so unloved,’ Patrick explains, ‘because essentially it had been divided cheaply and clad over repeatedly through the years by people who wanted to make quick and inexpensive alterations, whether it was creating student accommodation or office space.

No one had actually gone to the bother of interfering with the structural integrity of the building, which was a saving grace, because it meant we just had to remove endless layers of linoleum, plasterboard and wallpaper to find the original, undamaged building underneath.’

Having safely decamped, Patrick and Neri were presented with mixed news on the condition of the property over the next 18 months of renovation.

On one hand, there were rotten floorboards and missing panelling in rooms like the upstairs salon; on the other, original panelling was found intact in the kitchen area, and even the property’s original deeds were discovered, handwritten on velum and now framed in the hallway.

Aside from the entrance hall, the ground floor of the property has been entirely devoted to the family’s new kitchen-diner.

And although it’s just a couple of years old the room looks as though it could have been that way since the house was built. As the original wall panelling was discovered intact here, the kitchen was cleverly designed to avoid damaging it.

The sink, stove, fridge and dishwasher are now all contained in one enormous central kitchen island.

‘My friend Marcus Jacka, who designed it for us, suggested that it would be much more appropriate to call it a kitchen continent!’ laughs Patrick.

Clever touches, a fine period eye and a devotion to detail (they even preserved the hidden peg joints beneath the floor joists) knit this period house into a restoration that, while entirely authentic, never appears too austere to be anything other than the warm family home it has become.