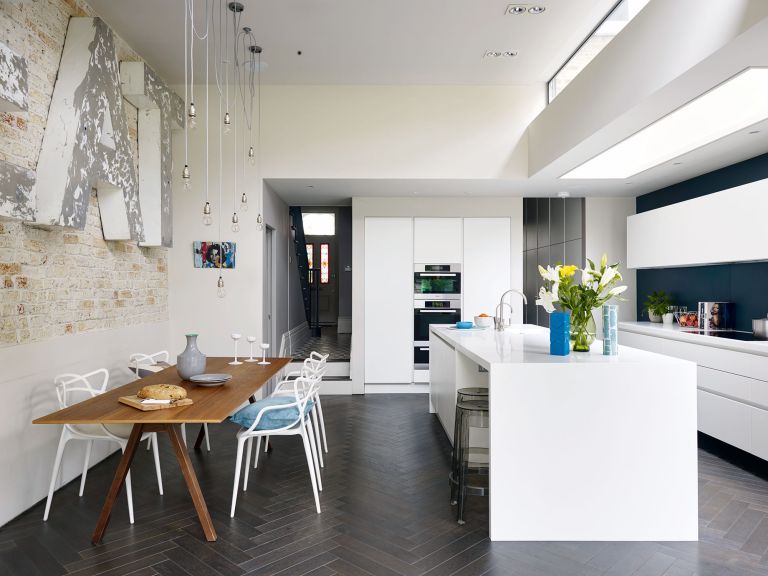 The owner: Stephanie Peltier, a happiness consultant (thehappinesssociety.com), lives here with her daughters, Juliette, 14, and Manon, 12.

The property: A four-bedroom, detached Victorian house in west London.

Despite the fact that there was little going for this dated Victorian house in west London, Stephanie and her ex-husband knew they could turn the property into something special. ‘Honestly, there was nothing right about the house, but it felt right somehow,’ Stephanie says. The house hadn’t been touched for 50 years, so the layout comprised a series of cramped, dark rooms and no proper garden access. ‘Despite this,’ she adds, ‘there was a sense of spaciousness in the high ceilings that could be improved upon.’

Stephanie began talks with 3s Architects before the sale had even completed in January 2012. They spent six months on the design, discussing how to remodel the entire house so it could work for them and daughters Juliette and Manon.

Find out how they transformed it, then browse through more real home transformations and learn more about extending a house.

A light-filled kitchen-diner and TV room extends the house and opens onto the garden. The front living room remains, but the middle room has been turned into a clever juncture for the loo and cloakroom cupboard, connected by the hallway and a new passage on the other side.

This radical shake-up was only made possible by moving the staircase. ‘The stairs were in the middle of the house and now they’re on the side,’ says Stephanie. ‘Even though I’ve lost the middle room, the house feels so much bigger because redesigning the layout has created a visual connection from the front door to the garden.’

The third bedroom – now Manon’s room – was enlarged by removing
a separate toilet and bathroom. Another bedroom is now a bathroom, while the architects also created a narrow en suite in the guest bedroom. ‘It’s only 900mm wide with the shower opposite the loo,’ Stephanie says.  ‘We’d seen one in a hotel and did our measurements,so we knew we could make it work.’

On the top floor, although the loft had already been converted, the ceiling sloped steeply to the eaves, leaving little floor space. ‘It was like a shoe box with a tiny bedroom and bathroom,’ Stephanie says. ‘We wanted to optimise the space with a dormer and make this the master bedroom.’

With a budget of around £350,000, the family went through a tender process and the building contractor came on board in September 2012. ‘Matt, the owner, was friendly and honest and knew where to save money,’ says Stephanie. ‘For example, he designed our bedroom wardrobes with Ikea fittings and bespoke doors.’

Matt also helped Stephanie plan the loft layout. ‘I wanted to be able to see the whole room but with separation between the en suite and bedroom,’ she says. ‘My idea was a full-height wall with sliding doors either side. Matt’s joiners designed and made this for me.’

Although the dormer could be built within permitted development, Stephanie wanted to install a triangle window within the gable end roof, thus changing the front façade. She sought planning permission for changes, but didn’t make a final decision until the loft structure had been built. ‘My instincts were right,’ she
says. ‘Once the old walls had been removed, I could see the window would look amazing with a freestanding bath beneath it.’

The downstairs has its fair share of striking glazing, too. A rooflight stretches along the kitchen galley, and there’s a high band of glazing around the dining area thanks to a stepped roof extension. Sliding doors overcome space limitations in the WC and cloakroom as well as closing off the kitchen-diner when needed. It’s this kind of functional thinking that Stephanie returned to time and time again. ‘I wanted the kitchen “experience” to be right,’ she explains. ‘The designer asked me how I use the kitchen, which made a lot of sense. The layout is perfect – I even have a breakfast area with drawers that store everything we need.’

Stephanie chose an all-white kitchen warmed with an exposed brick wall, chocolate brown chevron wood flooring and a striking blue-black painted wall. Through the rest of the house, the intensity of colour continues. Rich purple envelopes the living room, studded with jewelled turquoise and mustard furniture. Deep grey walls in the master bedroom have a cocooning effect, opening onto the cool tones of the en suite. ‘There are very few white walls in the house,’ Stephanie says. ‘I like dark, moody walls and bold colours.’

The project was finished in eight months and the house is unrecognisable from how it was before. ‘Although we kept virtually nothing of the original, we’ve created purposeful space,’ Stephanie says. ‘It’s multifunctional and I love the strong identity and atmosphere in each room.’