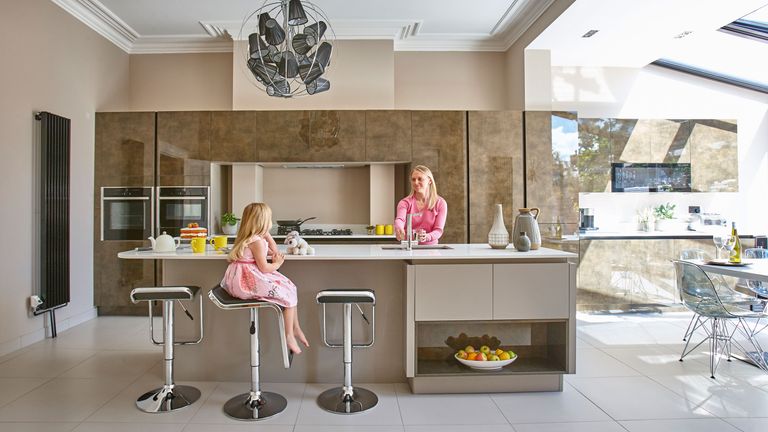 Clare and Richard new glazed kitchen-diner extension was the culmination of years of renovating a dozen homes before they bought this one.

They purchased the house at auction, pipping other bidders to the post in their determination to win this period property. It had everything they’d been looking for – large driveway, generous garden and a garage – features they had struggled to find in the area of Southsea. ‘I went into the estate agents the week before the house went up for bids, and put in an offer at the top of the guide price. We had to have it, I couldn’t let it slip by us,’ says Clare.

They cashed in some investments and within the month, they had the keys. However, the kitchen of their dream home felt detached from the rest of the house. With a bright, open-plan kitchen-diner in mind, Clare reveals how they set about achieving their vision on a budget.

Read on to find out more, and don't miss our guide to kitchen extensions.

‘The house had been untouched since the 1960s and needed renovating from top to bottom. The old kitchen was much smaller and to the side of the house. It was on a lower level with steps down and the only access to the garden was through a side door. We wanted to move it to the dining room, which was lighter with higher ceilings, positioning it in the centre of our home. The dining room was decorated with red velvet wallpaper and an orange shag pile carpet. There was a plastic lean-to conservatory attached to it that had seen better days.

'We’d bought and renovated 12 homes since 2002, so we had lots of experience on what we needed to do. We took on the bulk of the work ourselves to keep our costs low.'

‘While we tackled the first stage of the project, stripping back the house – notoriously dirty and messy work – we decided to stay put in our old home in the short term. It took three months of hard work getting the structural elements completed. Richard spent his early mornings, late evenings and weekends gutting the property and taking everything back to bare brick.

‘Once he was done, we rented out our old house and moved into the basement flat below this house. There were four of us living in a one-bed flat so it was a bit of a squeeze! We sold everything we owned because we had no room to store our furniture. All we had was a couple of suitcases of clothes.’

‘Because we were moving the kitchen to the other side of the house, we had to relocate the plumbing and rewiring, which Richard did himself. He’s taught himself over the years as we’ve been doing up houses, starting on small projects, and now he’s confident taking on a big renovation like this one.

‘We called in a building contractor to help install four large steel beams to support the back of the house – it took eight people to lift them into place! We added a steel frame and in a few months the basic layout was in place.

‘The biggest challenge was coming up with a design to make the rooms seamlessly blend into each other, as the old layout was over different levels, so when we levelled out the floor, the ceilings were still all different heights.’

‘For the kitchen design, we went with our hearts. We saw these bronze door fronts in a showroom and it was love at first sight. They’re a radical departure to the white or grey units we’d been looking at. Our kitchen designer drew up a plan that worked around the chimney breast, with a large central island that doubled as a breakfast bar.

‘We wanted to keep as many original features as we could, including the chimney breast and the ornate ceiling rose. We had units running flush along one wall into the dining area to blend the two spaces together. Ever the handyman, Richard tackled the kitchen himself. It came in 100 boxes and a million little pieces, which he fitted together like a jigsaw puzzle.’

‘Just over a year after we started, we’d finished the bulk of the work, but the room needed a few finishing touches to make the space feel homely. I created a moodboard with loads of samples and referred back to it when I wanted inspiration. I had the paint for the walls made up by colour-matching it to the floor tiles. We struggled to find a light fitting on the high street that was big enough for the ceiling height, so I went online instead. The proportions give the space the look of a smart hotel.

‘It took around 14 months in all, but we took our time to think about all the little details. Doing the bulk of the work ourselves saved a lot of money, and it’s because of that we could afford to splash out on luxury touches to give the kitchen a glamorous look.’