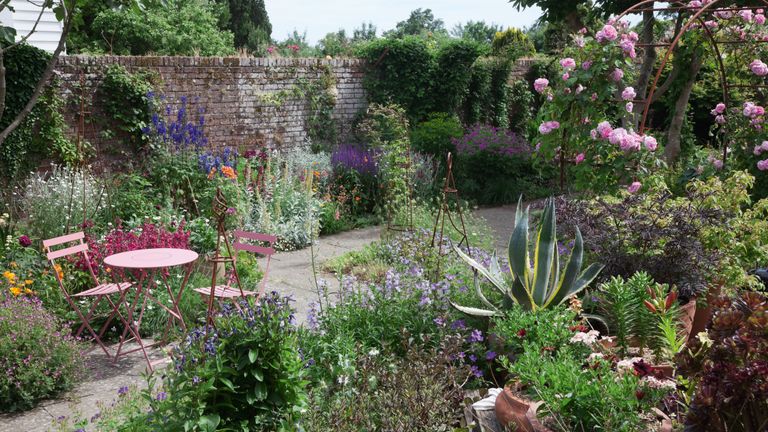 When they first caught sight of the small garden to their future house, in the centre of the small hilltop town of Winchelsea, East Sussex, Sally and Graham Rhodda were not put off by its lack of features and planting.

In fact, the complete opposite. ‘We were leaving a big plot that had taken a lot of work,' says Sally. 'Graham had just retired and we’d decided that we didn’t want to spend all our time gardening.

'At first we loved the fact that the previous owners had made the small garden as low maintenance as possible.’ This sentiment did not last for long, however.

Read on to find out how Sally and Graham transformed the low maintenance plot, or find more inspiration on how to make the most of a small garden.

‘Once we moved in, I was happy for about a month - and then I started to miss gardening terribly,’ Sally says. ‘So we took out some of the paving, and put in plants. Then the decking that covered the whole of one side went, and then some more paving…

Under it all they found really good, crumbly soil, and before long they found that they were spending virtually every day out in the small garden. 'And loving every single minute of it,’ Sally adds.

The garden might have taken over their lives now, but there’s no question that it’s time well spent – there are so many points of interest. It is the clever use of colour that really makes this pretty walled small garden stand out, though.

Individual borders have distinct colour schemes and single repeated colours link everything together, giving a sense of flow.

Find advice on how to choose a colour scheme for a garden.

‘We didn’t ever have an overall plan,’ says Sally, ‘we just tackled it little by little, using a different, limited colour palette in each area. The garden isn’t big enough for fashionable ‘drifts’ or a prairie effect, but three or five of the same plant makes a splash and one good geranium plant can have the same effect all by itself.

When we find a colour combination that works, we then use it elsewhere in the garden, too, for continuity.’

A major project in the small garden always follows one of their open days for the National Gardens Scheme.

'The very first time we opened, though, someone said they hated that they could see some bare soil – that made me panic and we became a bit obsessed with packing plants in. We probably went too far the other way in the end, so in the last couple of years we’ve tried hard not to over-plant or to buy everything we like when we go to a nursery,’ says Sally.

The garden is only about a mile from the sea and, although it is surrounded by high walls, the wind still whips through it thanks to its hilltop location, so Sally and Graham have to choose their plants carefully.

Outside the kitchen door, there is a sea of pale mauve ‘Bill Wallis’ geraniums – chosen because they look good over a long period – as well as the lovely clematis ‘Blue Angel’ and the pale Rosa ‘Buff Beauty’. Clematis are then repeated around the garden – in fact, there are an amazing 30 different varieties.

Graham goes out every week from spring onwards to keep them trained in fan shapes, using soft string and vine eyes. One year, he didn’t tie in Clematis ‘Mme Julia Correvon’ and, as clematis have a habit of doing, it turned into a real tangle – proof, if they needed it, that it’s worth the time it takes.

‘Visitors also always comment on the display of planted containers – Graham reused some of the original decking to create a raised “stage” that now shows them off perfectly,’ says Sally.

For more ideas for how to use containers successfully, see our advice on container gardening for small spaces.

The colour scheme for the pots changes every year and is designed to have as much impact as possible. Meanwhile, the area that was originally decked has been laid with American bricks, found on sale in a reclamation yard. Having been artificially ‘aged’, they look as though they have been there for decades.

Find expert advice on how to find reclaimed materials for your home and garden.

As a whole, the garden has the sort of timeless feel that makes you feel relaxed as soon as you enter it, and yet it remains fresh and vibrant thanks to the ever-evolving plant choices.

Sally's tips for a small garden include:

This article is part of Small Spaces Month, brought to you in association with the new Real Homes Travel Edition. A compact version of our hugely respected monthly magazine, Real Homes Travel Edition brings you all the same great content as the full-sized edition, but in an even more bag-friendly format that’s perfect for inner city commutes and French riviera holidays. Get yours now at WHSmith, Easons and selected newsagents.