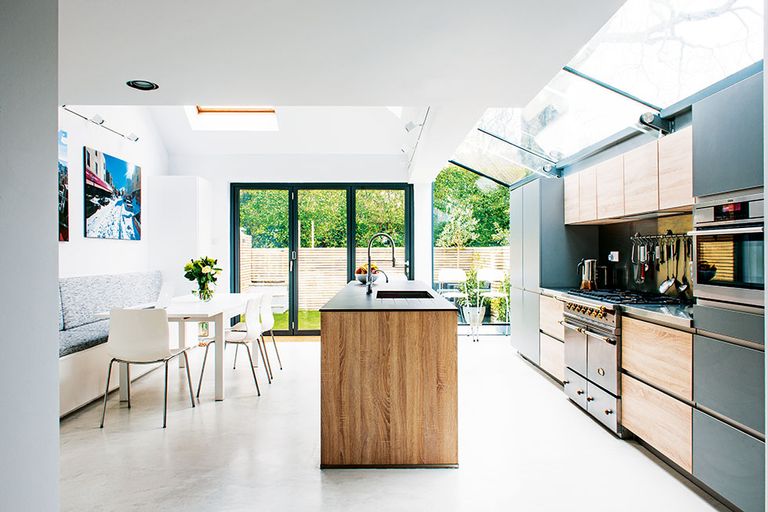 The owners: Lara Dearman and her husband Andrew, an IT project manager, live here with their children Lily, eight, Charlie, six, and Lena, two

What they spent: The couple’s kitchen extension project cost around £120,000

‘When we first bought this place back in 2006, we really liked the kitchen,’ recalls Lara. ‘Running alongside the space was a long, thin uPVC conservatory that had been built into the side return,’ she explains. ‘It was too cramped to sit or play in, and ended up becoming a cluttered storage area.’

The couple decided to undertake extensive redecoration throughout. They hoped to extend the kitchen and reorganise the layout to make the space feel less cramped.

In addition to accommodating the children, the room also needed to work for entertaining friends, so a large dining table was important.

Find out what they did next, then browse through more real home transformations and read more about extending a house.

The couple invited three designers to come up with ideas, including award-winning architectural and interior designer Martin Swatton. ‘We actually found Martin through Real Homes magazine, after reading about a kitchen he’d designed in Wandsworth,’ Lara explains. ‘It had exactly the look we wanted, with clean lines and bi-fold doors out to the garden.’

The uPVC side conservatory, rear wall, roof and a boiler-room outhouse were demolished, and reclaimed bricks used to rebuild the rear wall, where structural steelwork and aluminium bi-fold doors have been installed, as well as a frameless glass roof and wall panel.  A cat flap has been installed in the brickwork under a boiler cupboard so that the clean lines of the bi-fold doors remain intact.