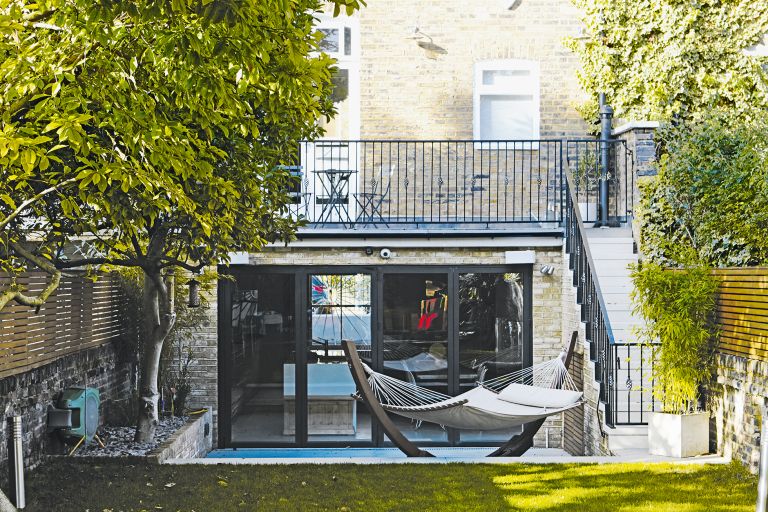 There's nothing we love more than a contemporary renovation of a Victorian terrace and this project, undertaken by Jonathan and partner Hannah, in Hoxton, East London is a great example of exactly what can be achieved.

Having lived in east London for 13 years, Jonathan was searching for a house to give him a personal creative challenge, explains, Hannah. ‘It was while Jonathan was house-hunting that we got together, and I actually came to the second viewing,’ she recalls. ‘Jonathan was thrilled when the house sale was agreed, but we were both gobsmacked when we found out on the same weekend that I was pregnant. It was such a lovely surprise.’

Needless to say, life changed rather dramatically, as the couple found themselves navigating the ups and downs of pregnancy at the same time as renovating their new home.

Find out how they did it, the browse more of our real home transformations. For practical advice on how to renovate a house, read our essential guide.

On the surface, the house was in good condition, but appearances proved to be deceptive. ‘Lots of the fundamentals were missing,’ Jonathan explains. ‘For example, the roof needed to be replaced and the house reconfigured.’ The list of works was to be the least of the couple’s worries during the renovation, however.

‘The imminent arrival of our son Milo cut the original project lead times in half, and we took the decision to bring in a project manager,’ says Hannah. ‘The work was at the point where the roof and the ground-floor back wall had been removed – and the lower-ground floor was visible looking down from the top floor through all the floors – when the then builder disappeared with a big amount of money. We learnt that a number of the sub-contractors hadn’t been paid, and beyond that, many weren’t up to scratch to go forward, so we went back to the drawing board.’

Jonathan then project-managed the build himself, designing and deciding on most of the details while juggling work commitments and becoming a new dad. The couple did all this in a whirlwind 12 months, with the support of their families, the original architect Huw Williams, kitchen and bathroom designer Charlie Esson, and new builder and carpenter Tom Bennett, who Jonathan continues to work with on other projects. As a result of the ‘restart’, the project took longer than intended and was more expensive, but no compromises were made with the scope or quality of finish.

‘Now that we’re living in the house, we’re really glad we didn’t cut any corners,’ says Hannah, who describes the work as extensive, from top to bottom. ‘We removed and replaced the sagging roof, and extended the loft space through one large dormer, which enabled us to reconfigure it by adding an en suite bathroom, walk-in wardrobe and three storage areas.

‘The lower-ground floor was the other major focus of the work. We knocked through three small rooms and added a small extension to create one open-plan space, which now measures 700 square feet. We then created a new rear patio area, and new front steps, as well as outdoor storage facilities. We also added a first-floor balcony.’

There were many decisions to make about the new bathrooms and kitchen, plumbing, wiring and decorating. The couple kept original features wherever possible, bringing them back to their former glory, such as the intricate cornicing on the ground floor. Where they could not be saved, they were reworked with a modern twist, combined with contemporary fixtures and fittings.

This juxtaposition between super-contemporary and traditional styles mirrors Hannah and Jonathan’s tastes. ‘Our styles really clash,’ says Hannah. ‘I really like period features, and hate modern interiors, whereas Jonathan loves clean lines and would have no round edges or softness anywhere in the house!’ The couple have managed to combine their tastes effectively, however, mixing streamlined surfaces and modern art with original cornicing and fireplaces.

The basement kitchen, with doors opening out to the newly landscaped garden, is the hub of the family home. The room is neatly sectioned into a comfortable living area with toy storage, and a kitchen-diner with a large custom-built table opposite a concrete island and range cooker. ‘It’s perfect for Milo and his friends, and means that he can play both indoors and outside without ever being out of our sight,’ explains Hannah.

The ground floor is for the ‘grown-ups’, and somewhere to escape to after dinner. With a living area in one half of the room, and a space dedicated to Jonathan’s DJ set-up and 10,000-strong record collection in the other, it also opens out onto a balcony.

‘We laugh about it now, but due to Jonathan’s obsession with music he installed a fully integrated audio-media system, including three separate record deck set-ups,’ says Hannah. ‘Through a Sonos system, you can play music into as many rooms as you like, including the garden. I think he envisaged having parties like the ones he threw when he was younger. The arrival of Milo with a 7pm bedtime, however, has meant it has been put to limited use — he DJs “Bare Necessities” from The Jungle Book instead.’

Despite Milo’s early bedtime, music plays near-constantly throughout this creative family home, and an ever-changing collection of original art, illustrations and limited-edition prints are displayed on the walls. ‘Our friends with kids love the fact that our house is both a practical family home and one that’s design-led and stylish,’ says Hannah.

Lastly, Hannah and Jonathan’s room is perched at the top of the house. ‘Hannah was extremely exacting about what she wanted in here. I tend to get my way in the rest of the house, so I was happy to concede here, although there is a hidden record deck and sound system,’ says Jonathan. Calming duck-egg-blue walls are the background to a neutral scheme with en suite and a walk-in wardrobe. ‘This room is a sanctuary for us. From the rooflights there are views over Hoxton’s rooftops and gardens. You can get away from the chaos up here,’ he adds.

‘The first time we met, we talked all night,’ remembers Hannah. ‘We discussed what we wanted, and our ultimate aim of having a “happy house” with lots of laughter in it.’ Years later, this vision has become a reality in the couple’s household. The Welsh words Ty Hapus are in stained glass above the front door — a proclamation to those welcomed into their colourful home.