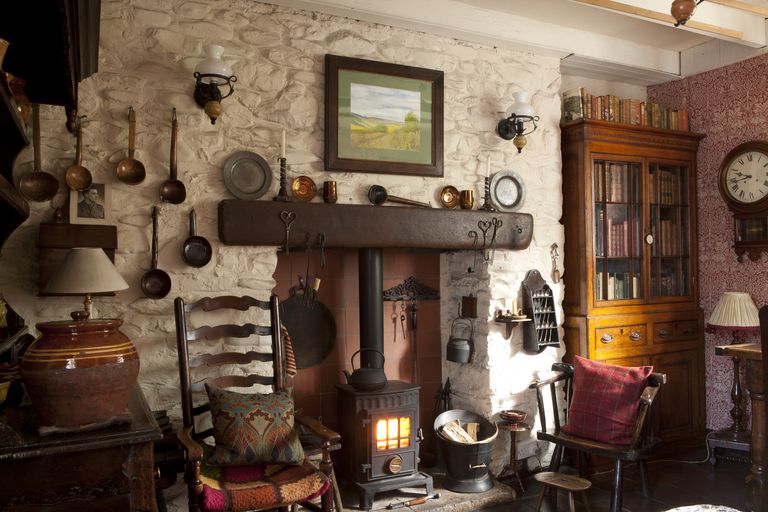 There are very few homes that can immediately transport you back to a simpler way of life from the moment you step inside, but the Horwoods’ is definitely one of them.

Without many of the trappings of contemporary living, this is a home that has a wood-burning stove in place of a television as a focal point in the sitting room, vintage utensils rather than gizmos in the kitchen, and traditional Welsh blankets, quilts and antique lace in everyday use in the bedrooms. It feels instantly welcoming and calm – a retreat away from the hustle and bustle of modern times.

Of course, this is not a way of life that suits everyone, and neither would such a traditional renovation, but restoring the cottage to the most original state that money and practicality would allow, was something that owners Mike and Mitzi were passionate about.

Find out how they achieved it, then browse more real home transformations...

Owners: Mike and Mitzi Horwood bought the property 20 years ago and live here with their kitten Molly

‘It had always been my dream to live in an old cottage,’ says Mitzi, who feels very sad that so many Welsh cottages have lost their identity through modernisation. When she and Mike got married in 1992 they were living with her mother in the neighbouring town, in which she was born, ‘but we really wanted a house of our own’, she says.  ‘I saw the cottage in an estate agent’s window and liked the look of it.’

While Mike was reluctant to view the cottage because he feared that it would be too small, she persuaded him to see it, yet ironically it was Mitzi who was disappointed with the interior when they visited. ‘I had my dream of what I pictured a Welsh cottage to be – beams, an inglenook fireplace, stone walls and lots of character, and there wasn’t any here because it had been given a terrible 1960s makeover,’ she shudders.

‘There were polystyrene tiles on the ceiling, plastic tiles on the floors, all of the doors were covered in hardboard panels and the fireplaces had been boarded up. There was no kitchen, no heating, and ivy was growing up the chocolate brown walls.’ To her amazement, Mike turned to her with enthusiasm and said: ‘I think we could do something with this!’

He convinced Mitzi that he could create the authentic Welsh cottage she had dreamed of by doing much of the work himself, and so they put in an offer of £29,000, which was accepted. ‘For the first 10 years we did things a bit at a time,’ Mitzi recalls, as money was tight. ‘Mike was a catering officer and he travelled a lot, but he always started work on the house after supper at 8pm every night.’

Mike remembers the graft only too well. ‘The first job was taking the skirting boards off and all of the plaster on the downstairs walls, which were damp. We took them back to the stone work and repointed them with traditional lime render. Then, we opened up the fireplace in the sitting room, put in a damp-proof course and installed fascia board and guttering on the back and front of the house before repointing it with lime,’ he says. ‘The next priority was to repair the roof. Damp had come through the slates and you could see daylight through them.’ A local builder re-felted the roof, then salvaged and relaid as many of the original slate tiles as possible.

With the house more structurally sound, Mike removed the PVCu windows and replaced them with timber sashes handmade to the original pattern used on other local homes. Then, once he had removed the polystyrene tiles and taken the ceilings back to the beams, the couple turned their attention to the design of their home.

With the help of a friend, Mike designed the small kitchen area to make maximum use of the space, with everything in reach on two simple shelves. The couple replaced the quarry floor tiles that were damaged by layers of thick black adhesive, with originals salvaged from a neighbour.

When it came to decorating, Mitzi went to the National Museum Wales, in Cardiff , for inspiration. ‘I wanted our home to look like an old Welsh cottage and a lot of them had wallpaper,’ she says. She worked on a general theme of three autumnal colours, which she ‘weaves through the house so that it blends together,’ with pattern from wall coverings and her Welsh blankets and quilts.

‘When we first moved in we had to make do and mend. We had an old battered settee off someone for £25. After eight or nine years, we started collecting older pieces,’ which became a passion. When the couple’s television broke four years ago, they preferred instead reading by the side of the fire in the evenings, and so didn’t replace it.

This way of life, in their carefully restored home, seems to be perfect for Mike and Mitzi. ‘When you put so much heart, soul and work into a house it becomes part of you, so I don’t know if I could ever leave here,’ Mitzi says. ‘We are really attached to the place, and we’ve got so much pleasure and joy from it. Even now, when we’ve lived here for 20 years, we still really love our cottage.’