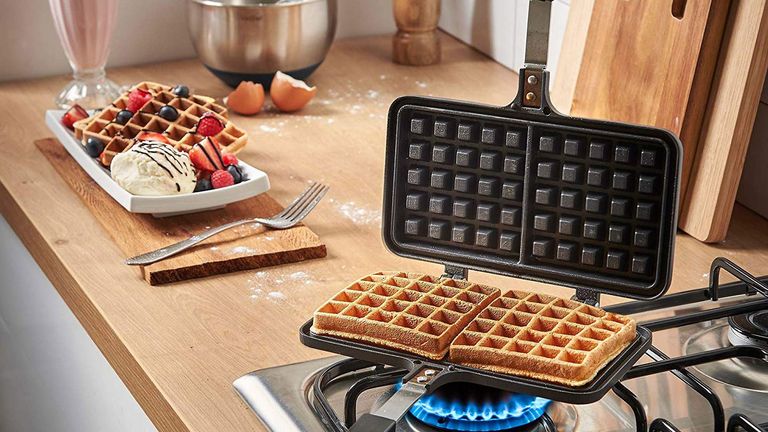 Weekend mornings are made for delicious breakfasts, in bed, or in the kitchen. Whether you've got a sweet or savoury tooth, why not cook up a batch of waffles?

It's a well known fact that making waffles without owning a waffle maker is simply impossible. Enter: the waffle maker. Whether you prefer them topped with fruit and syrup or want to have them on the side of your English breakfast, a waffle maker will make the job 10 times easier, and 100 times tastier.

What to consider when buying a waffle maker

Even waffles to satisfy the fussiest of eaters

+Heat resistant handle +Easy to clean+Rotating function for even cooking

VonShef's Rotating Waffle Maker truly deserves the top place on our list, not only because it has a handy rotating function to ensure your food is cooked evenly throughout, but also because it creates four waffles at once. It has a temperature control so you can decide how cooked you'd like them, and you won't have to worry about them sticking. Not a single feature is missed: there's a lock button so that once you're done rotating, you can keep your waffles upright, and a light which turns on to tell you the machine is ready for your batter. It may be bulky, but if you have the kitchen storage space, it's a handy and easy-to-use appliance to have.

The smartest waffle maker there is; just pour in the batter, and it'll do the rest

A hassle-free waffle maker worth the money, Sage's Smart Waffle Maker is perfect for waffle aficionados who know their classic batter from their buttermilk. Simply input your waffle specifications, the type of batter you'll be using and your preferred waffle style, pour it in and let the machine do the rest. It not only automatically calculates cooking time to suit both your waffle style and colour, but even has a 'Bit More' button for those who like their waffles a little crispy. For those who aren't as elegant at making waffles as they wish, the machine has a non-stick moat around the sides to catch any spillages. Genius.

Who says traditional is boring? This waffle iron ticks all the boxes

For those wanting to take a more traditional approach with their waffles, grab yourself one of these and put the stove on. With an average heat up time of three minutes, simply pour the batter in, close and secure with the safety latch, and then put the timer on. Clumsy chefs may have to clean the stove afterwards, but it's all part of the fun, right? Compatible with electric, gas, ceramic and halogen hobs, it may just be the simplest waffle maker, and it even cooks two at once. Wireless, the iron is also easy to clean, as you can pop the whole thing in the sink after using. Probably not the tidiest option for those who have small children who want to get in on the action, but perfect for those who know their waffles and the limits of batter. Oh, and you can control the temperature yourself by just turning down the heat on the stove! Simples.

For delicious and even cooked waffle bowls, there's really no other way

Casting a brand new light on waffles, the Smart waffle maker creates waffle bowls (yes, you read that right) in just minutes. With a handy line inside to show how much batter you need to pour in and reduce spillages, SMART's waffle bowl is compact, and does exactly what it says on the box. It does only cook one bowl at a time, but because each bowl only takes as little as three minutes to cook, we can look past that. With endless possibilities, who says you just need to cook waffles? Pancakes, hash browns; you name it, and turn it into a bowl.

The best basic waffle machine for those who aren't waffle crazy

For those who like the taste of waffles on the odd occasion, this VonShef machine is your best bet. It's budget friendly, easy to use and has a handy wrap-around cord making it easy to store when you're not using it. Able to cook four waffles at one time, it has a high cooking power; however, if you're fussy about how your waffles are cooked, you'll need to bear in mind that it has no temperature control. Perfect for families, especially those with children who like to get in on the fun, this is the best budget waffle maker in our opinion, and it's extremely simple to use.