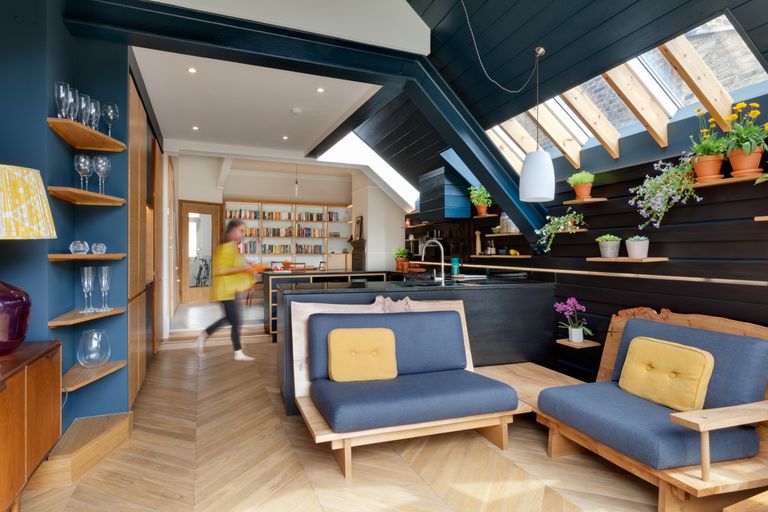 The owners: Alex Laidler, a health and social care director, lives here with her partner, Steve Collett, who works in telecommunications and tech, their son, Benjamin, one, and their cat Lily

The property: A four-bedroom, three-storey Victorian terrace in Wanstead, London

Ask Alex and Steve what their favourite part of their house is and they’ll instantly point to the bespoke seating area facing the back garden. With light flooding in from all angles and plants creeping across the wall from cantilevered shelves, it’s easy to see why they love it so much. As well as being the perfect place for a glass of wine in the evening, it’s also given the couple space to sit and play with their one-year-old son, Benjamin – the newest addition to the family since they extended their three-storey Victorian terrace two years ago.

When Alex and Steve bought their home in November 2011, it consisted of small, cramped rooms and a cheaply built conservatory that desperately needed updating. ‘I don’t think we envisaged doing a project like this,’ Alex says. ‘I remember sitting in the dining room with paint charts, trying to figure out how we could make it look good just with paint. But the house simply didn’t suit our needs, and we came to the realisation that we needed to extend.’

Find out how they went about the extension, then browse through more real home transformations and extensions.

The rooflines' unusual shapes make this extension distinctive, but matching the brickwork to that of the original house is a neat trick to make the extension feel authentic.

The couple chanced across architectural designer Tom Kaneko after spotting a neighbour’s new extension. ‘We really liked the nature of the build that he did for them, with lovely Art Deco-style doors,’ Alex explains.

At first, Alex and Steve were cautious about what they wanted to do. Their priority was to better connect their home and garden. Tom initially proposed an internal garden space, but the couple thought it would be too difficult to maintain. Instead, they decided on a ‘garden wall’, with planters perched on cantilevered shelves. Tom sketched out a plan for the build, following the lines of the property and mirroring the sloping roof. He also brought in Pippa Murray to help design the kitchen.

‘I’d explained to Tom I’d grown up in Australia and spent lots of time outdoors,’ says Alex.  ‘We told him about a David Hockney picture of a Californian house with a wooden shaded seated area that we took inspiration from. He’d come up with ideas from that.’

By the time planning permission was granted for the project, it was bigger than the couple had initially expected, and more complicated. ‘We decided to work on the loft extension that had been done by the previous owners at the same time,’ Alex explains. Before they’d finished, the couple had also added a bathroom and bedroom remodel. ‘It meant that Tom was able to design the structures together and harmonise them,’ Alex adds.

After removing the existing conservatory and extending off to the side, the couple’s builders knocked the dining room through to make an open-plan space. Next, they started work on the kitchen. ‘I wanted a homely feel,’ Alex says. ‘Wood was a key theme for us.’ In keeping with Pippa’s earthy scheme, oak runs through the extension in the window frames and the doors. Oak-veneered plywood units are topped with granite worktops to continue the natural look.

The focal point of the room is the bespoke seating area, designed by Pippa. ‘We were out shopping and admired a Japanese seat with a natural timber frame by George Nakashima,’ Alex explains. ‘We showed Pippa and she created her own with some reclaimed elm. We must have spent more time on the design of the sofas than any other part of the kitchen, and at times, we debated whether we were being a bit silly, but it’s the thing that makes the extension really special. We used the remaining wood to make the bar stools, too.’

‘We spent more than we'd intended but got a lot more out of it in return. I can’t imagine living in the place as it was now Benjamin has come along,’ she adds. ‘He loves watching the planes fly over through the rooflight, and we spend so much time sitting on the floor looking into the garden at the sky.’

Planning your own kitchen extension? Find out more: