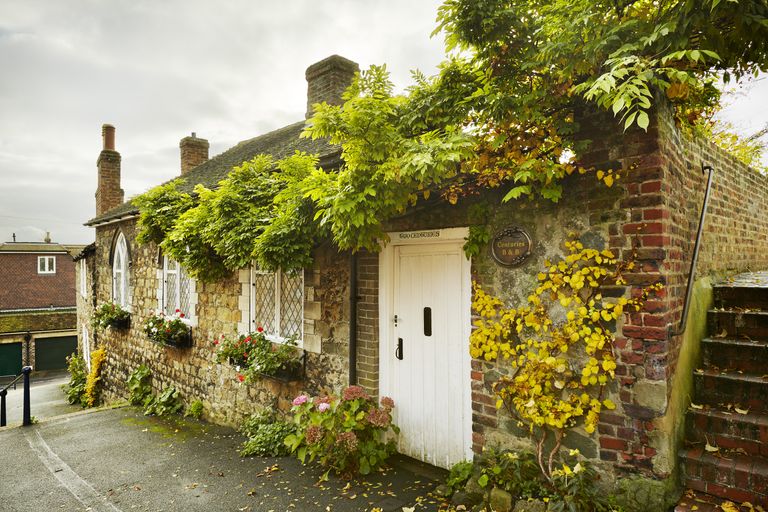 John and Milaena Osborne are connected by deep family and emotional ties to their Grade II* listed home in the seaside town of Hythe. It is one of the most historically interesting and – the original structure built in the 12th century – one of the oldest houses in Kent. ‘John’s parents bought the house in 1965 and it has been in the family ever since, encompassing four generations,’ explains Milaena.

Find inspiration for your own renovation project with more of our stunning real home transformations. Read our guide on renovating a house, too, for more guidance.

To fully appreciate Centuries, as the house is called, it is important to understand a little of its history, a subject John and Milaena never tire of exploring. ‘We know that Hamo de Hethe was born in the house in 1270 and that he went on to become the Bishop of Rochester,’ explains Milaena.

‘Hamo donated the house to the Church when he resigned the see – his seat – in 1352, and it was in church hands until 1949 when, having been earmarked for demolition, it was sold to  a private buyer,’ she adds.

The house is built of Kentish ragstone, a hard, sandy limestone, and the original structure still stands, parts of which can be seen in the merchant’s cellar, the ground floor hall and the second floor hall and kitchen.

Original flooring and fire pits still remain, as well as many remnants of Anglo Saxon and Medieval pottery, iron and interesting archeological fragments of early tools, and other pieces, which are currently being archived by an expert from English Heritage.

‘During Hamo’s lifetime, he maintained the house and added an extension to the south west side in 1336, doubling the interior space,’ explains John. ‘Then in the 1660s additional improvements  were made, including the installation of some of the first sash windows, which were imported from Holland. In 1811, the north east Georgian wing was built, which added three more rooms with fireplaces and also created a walled garden in the interior courtyard.’

When he was a boy, John and his family used to holiday on the Kent coast. It was during one such trip, many years later, that his parents came across Centuries. It was in a dilapidated state, but they had a good eye for its potential and an abundance of respect for old buildings. They both loved history, architecture and historic art, and they simply fell in love with the house from the moment they first saw it. ‘It just about had a roof and glass in the windows, but it had been empty for 10 years and was in a state,’ John says. ‘They bought it almost on a whim.’

John and Milaena, who met in 1967 in San Francisco, where Milaena was living, and where John was doing a masters degree in printmaking, visited his parents at the house every summer.

‘We developed such strong bonds with the place: our children were christened here and all sorts of important family events have taken place here,’ says Milaena. ‘After the house became ours, we continued travelling back and forth from the States, replumbing, rewiring and redecorating as the years went on, and eventually, in 2009, we moved in once and for all.’

With impeccable regard for the integrity of the house, John and Milaena, who are both from design backgrounds and are visually minded people, have left the architecture within the structure exactly as it was, except to restore any damage and to open up some of the 14 fireplaces in the house. Given its age, one would expect it to be dark and pokey inside, but in fact, the ceilings are high – 12ft in the Georgian wing – and the rooms are well positioned to catch as much daylight as possible.

‘We are constantly collecting, and we love colour. The mix of things from all these different countries adds an uplifting sense of colour and light to the house,’ says John. Now that the refurbishment has been finished, the couple love to have friends to stay. ‘The pleasure our guests get out of staying here and learning about the history of the house is a real joy,’ says Milaena.

That is not at all surprising, as the bedrooms are delightful. The 14th-century master bedroom, with its two large windows – one Gothic, one an original Dutch casement – perfectly shows off the couple’s eclectic decorating style.

There is a large Edwardian armoire and a Japanese wine table, as well as a four-poster Caribbean-style bed by Ralph Lauren. ‘It is a wonderful, private and comfortable room that is cosy in the winter, but has expansive windows that can be opened up in the summer,’ explains Milaena.

Two further bedrooms added during the Georgian era are equally charming. One overlooks the walled garden through a Gothic window, the other adjoins the library. A comfortable sitting room, dining room and kitchen are filled with intriguing treasures, antiques, old rugs and yet more paintings.

‘It is a comfortable family house with very little in it that is financially precious, but there is plenty that is emotionally irreplaceable,’ says Milaena.

Leaving the sunshine of California and a big, comfortable house with a swimming pool behind them was a major decision for John and Milaena, but it is one that they do not regret for a moment. ‘It’s a wonderful, magical house that is both our passion and our livelihood,’ says John. ‘We can’t help but love it.’