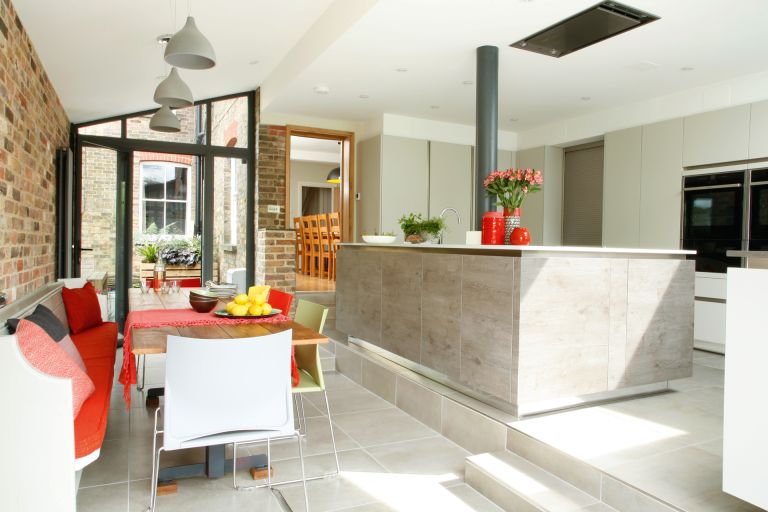 Having grown up in southern Africa, Robin and Ian are both accustomed to a more temperate climate, and the indoor-outdoor lifestyle that provides.

The owners: Robin Stephenson, a medical secretary, lives here with husband Ian, a structural engineer. They have two children, Liam, 27, and Alexander, 24

The property: A five-bedroom Victorian terraced house, built prior to 1892, in Berkhamsted, Hertfordshire

‘We love living in the UK but the weather does mean we aren’t able to use the garden as frequently as we would like,’ explains Robin. ‘In the end, the weather provided the impetus for us to extend the kitchen and bring that patio area into the house so we could use it come rain or shine.’

The couple moved into the Victorian terraced house 23 years ago, and although they had freshened up the kitchen 10 years ago, Robin and Ian both felt it needed a more radical transformation to become their ideal space.

Ian contacted architect Nick Wood, at Blackwood Architects, whom he had worked with professionally in the past, to draw up plans for a three-metre-wide side-return extension.

Find out what they did next, then check out more real home transformations and extensions.

‘We knew we wanted glazed doors at both ends to make it feel like we were connected to the outdoors, as well as a large rooflight above the sink,’ explains Ian.

‘The finished space would be open plan but naturally separated into cooking and dining zones thanks to a change in level of the site, which meant a step was necessary.’

Unfortunately, it proved to be a challenge getting the relatively large extension past the local authority’s planning department. Luckily, having discussed their proposals at an early stage, Robin and Ian’s neighbours were happier with the plans, which they felt would actually increase their privacy, and consented to the work.

With planning approval finally granted, Ian and Robin put the project out to tender before settling on a local building contractor, with architect Nick on board as project manager.

Robin’s key requirements included a breakfast area with pull-down door to hide the toaster when not in use, as well as double Neff ovens, a concealed extractor fan, and a sink large enough for a baking tray.

‘The whole kitchen needed to function, but also look crisp,’ she adds. With the plans drawn up, they chose Hawk Interiors to supply and fit their chosen kitchen.

‘We knew we wanted flat, handleless units that would be easy to clean,’ explains Robin. ‘But we found they were quite hard to come by, so we had to go for a German-designed unit to get the look we really wanted, although it was well worth persevering.’

An exposed brick wall is a key feature, although this was very nearly rendered and painted.

‘It would have looked very clinical without the brick – I’m glad we decided to leave it exposed in the end,’ adds Ian.

Now the extension is complete, the couple are able to enjoy the former patio space every day. ‘It doesn’t matter what the weather is like now,’ says Ian. ‘We can sit and enjoy the views of the outdoors without the risk of getting wet.’