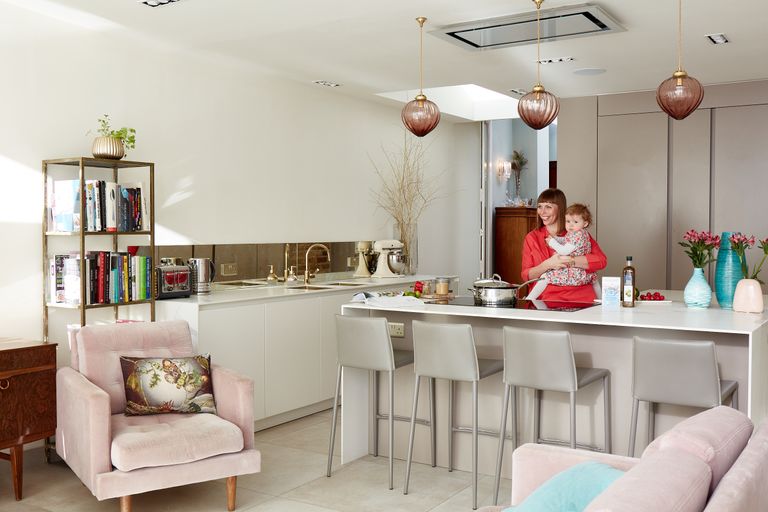 For Keira and Martin Lloyd, their house was a forever home, but one that needed a bit of work when their daughter Cicely came along. The first project on their list? Extending their tiny flatpack kitchen to create a family room inspired by the summery palette of Keira’s beloved garden. Here, Keira shares the five-step plan that led to her dream indoor-outdoor space...

Love this? See all our real home transformations – and find out more about extending, too.

The owners
Keira Lloyd, a marketing director, lives here with
her husband Martin, an operations director,
and their daughter Cicely, two

The property
A four-bedroom Victorian semi-detached
house in Peckham, London

‘By the time I fell pregnant with Cicely, I’d fallen in love with Peckham,’ Keira says. ‘We didn’t want to move out: we just wanted more space so we could enjoy it as a family home. You see it all the time: pregnant women and builders go together like jam and toast!

‘The existing kitchen was long, narrow and fitted with Ikea units. It suited us for a while, but when Cicely arrived, it was time for an upgrade. We wanted an open-plan eating, living, dining and cooking area that works well with a young family. But the most important part of the brief was to bring the outside in. I developed a love of gardening when we bought the house and I’d spent time planting the scheme, so we decided to make the kitchen and the garden one seamless space.’

Keira’s palette is made up of natural tones and pink shades, picked from her garden flowers. ‘I love being in my garden so I was inspired by nature when it came to choosing the colour scheme,’ she says.

‘Living in a Conservation Area meant that we had to think sensitively. We went through the planning process and initially had an architect draw up plans, but in the end I project managed the process with a builder. We designed a lot of the kitchen on site, which was a brilliant experience as it allowed me to react to things and make choices as we went along.'

'For example, we’d originally planned a step ceiling for the extension, but as I was having a cup of tea with the joiners one morning when they were putting the roof on, I said, “That looks awful. Can we change it?” We ended up swapping it for a smoother style. Being on the spot meant that we were able to fix things that would have annoyed us later on, or that we hadn’t thought of in the initial design.’

‘I loved the build process. Even though we didn’t have a kitchen while it was being done, it worked out okay – it was summer so we ate a lot of salads.

'Every project has its tricky moments, but it was the poor builders who bore the brunt of my stress. When they worked outside, I constantly flitted around, making sure they didn’t squash any of my plants. I even rushed to the rescue when I found an upside down wheelbarrow in the border one day. Needless to say, they must have hated me at times!’

‘My garden is where I love to be, so the kitchen colour scheme was inspired by nature. Everything was based on an outdoor palette: earthy-coloured units and marble-effect work surfaces. The worktops are actually ceramic tile, which is a really serviceable alternative to natural marble. The sofa and the armchair are the same pink-mauve colour as my garden flowers, as are the pendant lights.

‘Outside, we chose mirrored glass for the frame of the extension, it reflects the garden and maximises the amount of greenery in the space. The slim-profile doors have a minimal frame. We also have the same floor tiles in the kitchen and outside. It took a lot of work to line them up, but it now looks like one big living area.’

Keira loves the marble-effect ceramic tiles covering the kitchen island. ‘They’re more serviceable than real marble but they still tie into that natural scheme,’ she explains.

‘We use the outside space whenever we can – it really is an extension of our home. We have breakfast outside at the weekends when it’s sunny, and I like to have a cup of coffee by myself in the morning before I go to work. If I’m working from home, it’s a great place to sit outside and gather my thoughts.'

‘My favourite part of the extension is the view onto the garden through the doors. In the winter, it still feels like the garden is part of the space, and in the summer you can open the doors out to the terrace to extend the room.'

'My only regret is that we didn’t do the project earlier. In an ideal world, we’d have done it at the same time as other improvements to our house. In the end, it’s worked out better than I could have imagined. It’s the perfect space for us.’