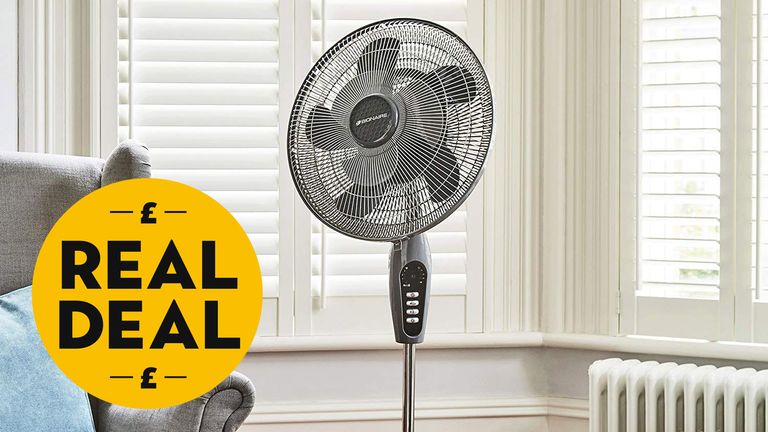 The heatwave is here and temperatures are set to soar over the next few days. If you don't own a fan, then you definitely need to purchase one fast.

We know, it's the end of the month, and no one has money to be splurging on a fan. The answer? Amazon are currently offering 25 per cent off selected fans, and if you're a Prime member, you'll be able to enjoy your purchase tomorrow thanks to free next day delivery. Some products might even reach you later tonight.

Interested? Prices are low, temperatures are high. Scroll for the deals.

Q-Connect Desktop Fan | Was £49.99 now £12.49
Need a desktop fan for your home office? Or after something a little smaller to perch on your bedside table to keep you cool during the night? Now only £12.49, this fan is a bargain with 75 per cent off. It also has three speeds to choose from and it oscillates.View Deal

Q-Connect Tower Fan | Was £59.79 now £23.99
Ideal for use in larger homes, rooms or in an office, this rotating tower fan has a range of temperature settings, it oscillates 90 degrees and it has 60 per cent off.View Deal

Bionaire Oscillating Mini Tower Fan | Was £34.99 now £27.99
In the market for a smaller fan that still does the job? Whether it's because you're tight on storage space or you have a small bedroom, this mini tower fan will do the job perfectly. It can be popped on top of a table or on the floor, your choice, and it has three different speed settings. It oscillates, has a built-in ionizer to remove impurities in the air AND it has an eight hour timer. View Deal

Honeywell Tower Fan | Was £57.99 now £39.99 | Save £18
Featuring three speed settings, the ability to auto-shut off when accidentally left running for too long and oscillation at 55 degrees, this Honeywell fan is a good option. Right now there's 31 per cent off, and it has a carry handle for transporting to different rooms. View Deal

Bionaire Stand Fan | Was £64.99 now £47.99 | Save £17
This stand fan is eco friendly, it oscillates and you can manually tilt it to target wherever you're sitting in a room. It features a variable speed dial as well as an LED light and it has 26 per cent off.View Deal

Bionaire Floor Fan with Remote | Was £79.99 now £54.99
This floor fan can be controlled with a remote control to save getting out of bed, and it has three different speed settings to choose from. It's also height adjustable and it has a wide oscillation angle.View Deal