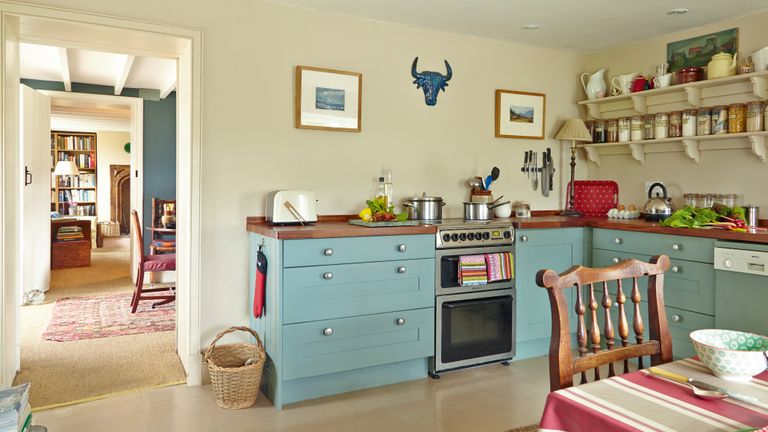 A quick sketch on a paper napkin led to a new look for a neglected, former forester’s cottage in Snowdonia, as Lucinda Griffith spotted renovation potential that others had missed, and all on a tight budget.

Owner  Lucinda Griffith, an interior designer (lucindagriffithdesign.com), lives here with working cocker spaniels Scribble and Hector.
Property A former head forester’s cottage, thought to date back to the late 18th century. The four-bedroom home is near Cerrigydrudion, on the edge of the Snowdonia National Park.
What she did Lucinda reconfigured the interior layout completely and reinstated period features in keeping with the age of the house. She improved the exterior too, creating a driveway, a lawn, new flowerbeds and a kitchen garden.

Parked up at the top of a steep forest track, Lucinda Griffith redesigned the layout of the rather sad old cottage she had just been to see. Using what she had to hand – a paper napkin and her many years’ experience advising other people how to make the best of their homes – Lucinda came up with beginnings of a plan to give the house a new lease of life and save it from further insults.

The former head forester’s house, 1,200 feet up on the edge of Snowdonia, had been on the market for two years but Lucinda suspects that anyone who viewed it hadn’t been able to see past the gloomy interiors and awkward spaces.

‘It had been renovated in the 1980s and it was totally soulless,’ says Lucinda. ‘I thought no one would get the layout right, and that would have been so annoying as I knew the house could be really lovely.’ So right there and then, sitting in the car, Lucinda decided to buy the house and see what she could do to put it right on a budget.

First, she turned her attention to the living room, building a chimney breast from breeze blocks so she could install a stove. The fire surround was a fortuitous find from an auction in Dorset. Lucinda saw it online and put in a bid for it. She didn’t get it at first, but the next day got an invoice for it. The person who’d placed the winning bid hadn’t measured it, but it turned out to be an exact fit for Lucinda’s living room. ‘It’s a French oak antique surround and it’s a total fluke that it works as I’d already built the chimney breast,’ she says.

She worked through the house adding architraves, deeper skirting boards and replacing the flat 1980s doors.

‘I stripped the Anaglypta every night after work for three hours, without fail, and painted over the dark stained beams to reflect more light,’ recalls Lucinda. It seemed endless, exhausting work but seeing the house slowly begin to take shape gave Lucinda the energy and impetus to continue.

A major breakthrough came when she started work on her new kitchen. When Lucinda first moved in, the kitchen had been banished to a 1980s extension at one end of the property, but her napkin sketch moved it back to its original position at the heart of the old section of the cottage.

Repositioning rooms meant moving doorways too, and Lucinda simply drew on the walls in marker pen where she thought the doors should be. When the builders knocked through, she was delighted to discover the original stone lintels were still there, exactly where she’d drawn them.

Not all of Lucinda’s project was about looking to the past; she likes to mix in more contemporary looks alongside period details, and says she doesn’t like houses to look too specific to their time. ‘It’s really important that a house and its decoration has a flexibility in it so it can grow with you,’ she says. ‘If the house reflects the people who live in it, it doesn’t date. If it reflects trends it does.’

Lucinda also takes inspiration for interiors from the colours of the landscape and, as she was working on the garden alongside decorating the home, she had plenty of opportunity to study its setting. ‘It’s best to think about how furnishing colours will work with the different light and setting,’ she says.

The cottage's reconfigured layout allowed for a small cloakroom, a much more practical use of the space than the previous downstairs bathroom, and Lucinda says she never got used to the idea of taking a bath downstairs.

Faced with the soot-blackened stone fireplace and chimney breast that sapped the light from a whole wall of her ‘new’ kitchen, the solution seemed obvious. Lucinda plastered over the stone to dramatically lighten the space and installed another stove to add further warmth.

She wanted kitchen cabinets in an unusual colour but didn’t have the budget to buy them custom-made from an expensive brand. Ever resourceful, Lucinda saved money by planning and measuring the space herself and ordering the cabinets online, finished in her colour choice. The entire kitchen cost just £3,000.

Lucinda also had to rethink the upstairs layout as the bathroom was accessed through the main bedroom and had no bath. She got round the problem by creating a new corridor and fitted a new bath.

Get the best period home inspiration, ideas and advice straight to your door every month with a subscription to Period Living magazineView Deal

‘If you’re inspired by necessity rather than constrained by it, it’s amazing what you can do,’ she says. ‘Too often people are not prepared to accept necessity. But I tell them it can be interesting and rather marvellous.’ And her new-look forester’s cottage, restored on a shoestring, and full of inspiring money-saving ideas, is all the proof she needs.