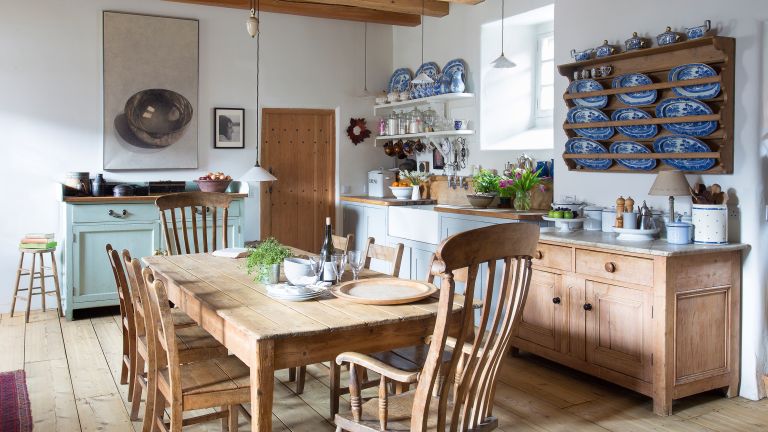 Owners Nicholas Groves-Raines, managing director of Groves-Raines Architects, and his wife, Kristín Hannesdóttir (right), an architect and director of Groves-Raines.
Property Lambs House is Category A listed, built in 1610 as six flats, in the medieval heart of Leith, near Edinburgh. The property serves as an office for Groves-Raines Architects, the Icelandic Consulate where Kristín is Honorary Consul of Iceland, and a cultural hub for the community.
What they did The 17th-century building was meticulously repaired and preserved. The 1960s lift shaft, fire doors and modern finishes were removed and original architectural elements reinstated in keeping with its rich heritage.

Step into Lambs House and you step right back to the 17th century, to a time when Leith was a bustling trading port, where merchants from nearby Edinburgh made their substantial fortunes. Indeed, this elegant home was originally built as apartments, pieds-à-terre, for those merchants whose family homes were typically in Edinburgh itself or in the surrounding countryside.

By the early 20th century, however, the port had fallen silent and Lambs House had become very run-down. In 1938 it was saved from demolition and partly restored by the Marquess of Bute, who gave the building to the National Trust for Scotland in 1958. The Trust was forced to lease it in order to preserve it and it was adapted as a day centre for the elderly.

Read on to find out how architects Nicholas Groves-Raines and his wife Kristín Hannesdóttir repaired and preserved the building, reinstating period features in keeping with its rich heritage. Then be inspired by our many more real home transformations and learn more about renovating a house.

When architects Nicholas and Kristín took on the old building it was seriously neglected and had sunk deep into disrepair. The roof was covered in bright modern tiles, the paint was flaking, and the garden was shabby and badly planned. Brick partitions and concrete floors had been unsympathetically installed and all the fireplaces had been removed from the building.

Gutting and renovating this substantial four-storey building was a huge undertaking, but to passionate conservationists like Nicholas and Kristín, putting it right is second nature; their motivation and passion were unshakeable.

‘Our main aim was to restore the building to its original form as closely as possible,’ says Nicholas. ‘However, a number of constraints, not least financial, meant that a complete restoration was not possible. We wanted to create a single dwelling with adjoining offices and self-contained guest accommodation rather than the original six small units.’ Instead of systematically restoring every detail, the couple have made the building work for them. For instance, several fireplaces were reinstated but only two of them have working flues.

Culross Palace in nearby Fife, also built by a wealthy merchant family, was a useful source of inspiration for Nicholas and Kristín’s project. ‘Many of the materials used in the construction of the palace, would have been sourced through their trading with the Low Countries, just like Lambs House,’ explains Nicholas.

Although the materials used in the renovation of Lambs House are as authentic as possible, some modern elements have also been installed, including new leaded glass in the windows. The adjoining offices were an important part of the renovation, and quite a family affair, too, as among the practice’s 30 employees are Nicholas and Kristín’s son Gunnar and their son-in-law Andrew Longworth, who managed the renovation team.

Once the structure was restored and the building preserved and sound, Nicholas and Kristín turned their thoughts to the building’s interiors. The décor is refreshingly simple and the couple have resisted designer choices. Instead, they opted for classic antique furniture and fabrics appropriate for the historic setting, ensuring that the architectural heritage and details remain the focus. One contemporary addition is a collection of Kristin’s simply framed still-life paintings. ‘I took some time out of architecture in the 1990s,’ she explains. Kristin’s ‘time out’ was to study painting at Edinburgh College of Art, where she completed an MA. ‘It was a quiet period in our practice and I welcomed the change of discipline.’

Nicholas and Kristín’s hard work in marrying the past and the present, both in the small details and on a larger scale, has created a sense of another time and place as soon as you enter this beautiful building.

And Lambs House is not the only property in Leith to have had the Groves-Raines treatment. Custom Lane, a historic harbour building, was a community rescue effort headed by their son Gunnar. It’s now a busy studio and community space for local designers and artists.

Kristín and Nicholas are delighted that their work in Leith has stretched beyond the walls of Lambs House in this way, and if their project acted as a small catalyst for regeneration in the area, it’s a job well done.