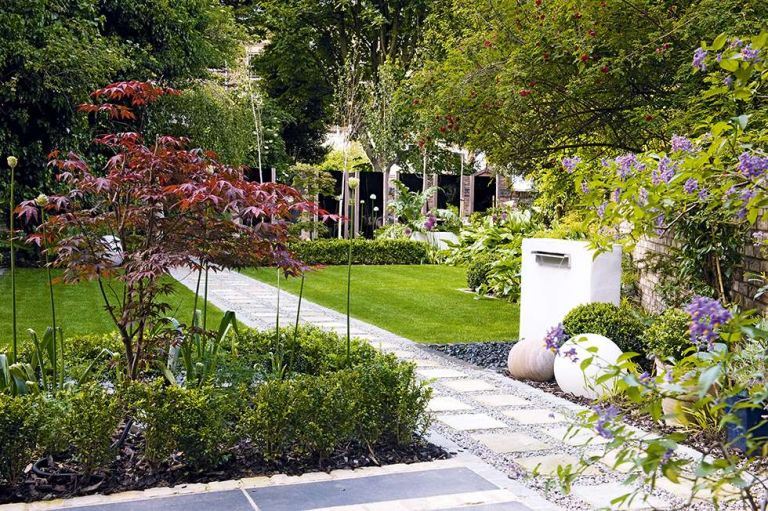 ‘Soon after moving into our house, we had the basement dug out,’ explains Hilary. ‘We had also wanted a glass box extension to the rear, but altered the plans and built a glass wall looking out from the living room onto the garden. We then had excellent views from the rooms we used the most, and realised that the house seemed incomplete without a garden that we wanted to use.’

Hilary and husband Nick’s previous garden had been bigger, with less hard landscaping. ‘This one is quite large by London standards, which was one of the reasons we came here,’ says Hilary. ‘I liked the idea of switching to a formal, structured town garden, but still using plenty of plants to soften the design.’

See what they did next, then check out more real home transformations and find out how to plan, design and cost your garden transformation.

The space started as a blank canvas, with only a lawn, some raised beds and a shed, so in order to better organise it, the couple called on Katrina Kieffer-Wells of Earth Designs after Hilary saw her work on Facebook. A theme and a sketch were then agreed in a single consultation.

‘I like to evolve ideas alongside the client, so that they have ownership of the concept and can agree or disagree with ideas straight away,’ says Katrina. ‘I also try to reflect the style of their home — Hilary and Nick’s kitchen is a glossy monochrome design, and I wanted the garden to have that feel.’

The family had specific requirements for it: Hilary is an avid gardener and wanted to include plenty of plants, and it had to be a family space with a practical area. Nick is a keen photographer and often uses the garden as subject matter, while the couple’s daughter Phoebe was keen to try growing her own vegetables, so there are raised beds. Above all, they wanted a place where they could relax and entertain.

Hilary’s desired oriental look was achieved with the layout, structures, and the choice of plants, which are mainly Japanese in origin. Katrina made up mood boards, including images of fire escapes and David Bowie’s Aladdin Sane album cover, and elements of these ideas were expressed in the angles of the paths and paving.

With the style agreed, the project went fairly smoothly and kept within the budget, with only the particularly wet winter of 2012 delaying progress, stretching it to four months. The ground needed to be levelled, although, fortunately, major groundworks weren’t necessary, as everything had to be carried through the house — except the birch trees, which had to be passed over neighbouring gardens due to their large size.

As Katrina explains, the garden is visible from four levels, so the design had to be very precise. ‘If you don’t get the spacing right, you lose the impact in a small town garden,’ adds Hilary. The diagonal angles of the garden create the most striking feature. The path, geometric lawn and hard landscaping are set at around 40 degrees to the boundary walls, serving two functions — it gives the garden a dynamic feel and journeys to both sides, making the most of the space. The design also visually pushes out the narrow boundaries for a widening effect.

From the house, the focal point – and Hilary’s favourite feature of the garden – is her Three Figures sculpture by Kathy Shadwell. Spotted in a Sussex shop window, they add an international flavour to the garden and accent the oriental theme. Hilary particularly loves the wooden pergola near the house that overlooks the whole scene, and which solved an early problem of a large, over-reaching mulberry tree; the highly staining black fruit now drop on the pergola roof instead.

There is a stylistic reflection of the pergola at the far end, where glossy black Perspex panels have been used almost as a fence, perfectly offsetting the stark white stems of the birch trees, which not only hide the shed, but give the garden a sense of grandeur. A seating area with rattan chairs and aluminium furniture adds further to the contemporary feel. ‘The terrace at the far end is nowhere near the house or any neighbours, so it gets sun all day, and is a real draw,’ she says.

Two other design features unify the whole garden: black granite setts, pebbles and gravel are used in bands at right angles, contrasted with pale-coloured slabs and paviours to give a sharp, graphic feel. This monochrome scheme fits well with the oriental theme and is visually exciting, but, as a subtle contrast to the straight lines, sandstone and luminous plastic balls are positioned along the entire length, drawing the eye through the space.