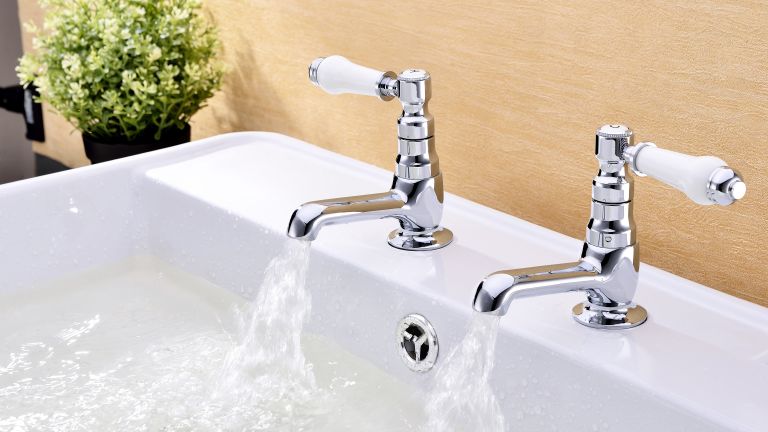 Changing basin and bath taps can revive a tired bathroom, bringing it bang up to date. Equally, you might be choosing them alongside a basin and bath as part of a new bathroom design. Either way, your mission is to opt for taps that work with your home’s plumbing and the room’s style.

Not sure how to go about it? We have all you need to know.

Bath and basin taps and your hot water system

Before you shop for bath and basin taps, be sure about what sort of hot water system you have in your home. Gravity-fed systems are lower pressure, and it’s essential to pick taps that are compatible.

If the basin you’re updating or the new one you’re installing has one tap hole, choose from monobloc and single-lever taps.

Monobloc taps have one spout, but there are two handles that allow adjustment of the flow of hot and cold water. Single lever taps are adjusted with a lever, and by turning it one way or another the hot and cold water can be controlled.

Both basin and bath taps are available with swivel spouts, which can be useful to move them out of your way when performing some bathroom tasks.

Invested in a basin with two tap holes? Then look for pillar taps. These supply hot and cold water independently. The handles of pillar taps may be lever operated, or have knobs or cross-shaped handles.

Check out the spout of any basin tap you’re considering. It needs to project far enough over the basin so washing your hands under the tap is comfortable.

Think, too, about whether you want a closed spout or a waterfall tap. The latter are open at the top, revealing the water flowing along the channel of the spout and can make a room more spa style.

Even if your room has a separate shower, a mixer tap with shower head attachment is useful for cleaning the bath, or hair washing in the bath.

Baths may also have three tap holes – one each for the hot and cold tap controls and the spout – or four tap holes with a shower hose in the fourth hole, and if this is the case for your bath, you’ll discover designs to suit.

As with bathroom basins, the number of tap holes in the bath you’re revamping or the new design you’ve chosen will determine which bath tap designs are open to you.

Pillar taps, which supply hot and cold water separately, and mixer taps are on offer for baths with two tap holes. Mixer taps permit independent adjustment of hot and cold water, but the two flows are mixed in one spout over the bath.

A mixer bath tap may also have an attached shower hose, and the water can be diverted to this as required.

Not all taps are positioned on the basin or bath, otherwise known as deck-mounted.

Wall-mounted taps are designed to go above a bath or basin, including countertop basins. The advantage? It allows basin and bath designs with narrow rims, plus positioning the taps above the basin or bath they’re filling looks neat. Wall-mounted taps should make bathroom cleaning quicker as well because the base of the tap isn’t prone to limescale build-up.

Consider spout length and height in any set up. A countertop basin may be set at a little distance from the wall and a tap that doesn’t project sufficiently far is going to splash the counter.

Freestanding – or floorstanding – bath taps are positioned alongside a freestanding bath. As they’re independent of the bath they’re a bigger presence in the room, so can be a way of making your new bathroom look striking.

As a general rule, both bath and basin taps can be separated into contemporary and traditional designs.

Contemporary bath and basin taps are sleeker. They may be curvaceous or more angular, and have slim or more substantial lines, and there’s a huge variety of choice on offer.

Chrome is an extremely popular option for basin and bath taps, and a sound choice if you want to create a sparkle in the bathroom. Consider these other options as well, though:

Stainless-steel bath and basin taps aren’t as shiny as chrome, but they’ll still look smart and pristine. They’re easy to clean and hard wearing, so will look good for many years to come.

Nickel bath and basin taps also look clean but with a less high-shine finish than chrome.

Brushed finishes are a further option if you don’t want full-on shine. They’ll stay looking cleaner for longer than chrome.

Gold bath and basin taps may have fallen out of favour for a while, but they’re now once again considered a finish worth considering. The reason? Gold will strike a warmer note than silver-toned metals as part of a bathroom scheme. There isn’t just a single take on gold on offer, though. As well as ‘plain’ gold, which looks as luxe as you’d suppose, consider rose gold, which is a pretty pink-tinged version, or antique-style golds, which have a softer effect.

Brass and copper taps, like gold, can add warmer metal tones to a bathroom, and look sophisticated.

Black bath and basin taps are contemporary and sleek. They’ll work alongside a steel-framed style shower enclosure, or can help tie the look of a home together where black accents are used throughout the bathroom.

Other coloured taps are also available. White is subtle, but you could bring a pop of colour to a family bathroom with a tap finished in green, red, yellow or blue among others.