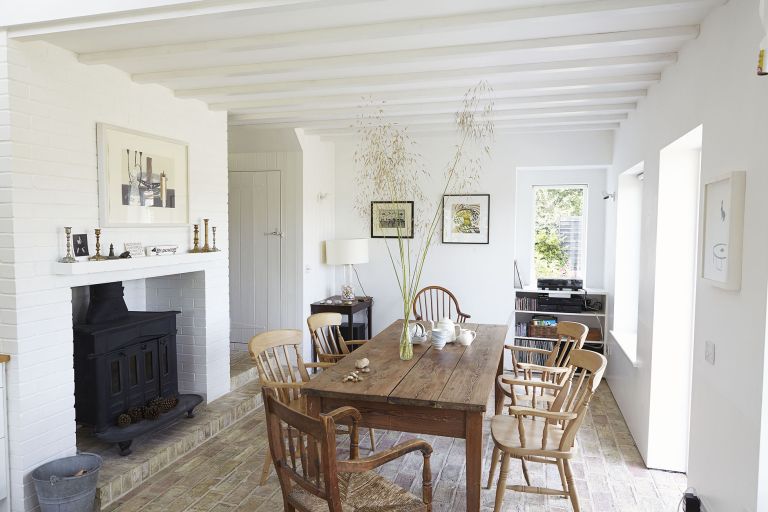 The perfect setting for wine with friends on a balmy summer’s evening, Michael Beanland’s home, nestled in the idyllic Suffolk countryside, is a relaxing retreat filled with collectibles and fabulous light.

Looking for more ideas and inspiration? browse more of our real home transformations. For more advice, check out our renovating a house guide.

Property: A four-bedroom former smallholding, built in 1930, on the Sandlings peninsula in Suffolk

Essential repairs: A steep staircase was replaced, as were all the windows, with an extension built to provide a new kitchen and bedroom. Major decorative improvement was required, including the removal of laminate flooring to reveal the original floorboards

Layout: A two-storey rear extension has reconfigured the property, adding an open-plan kitchen, and above this a bathroom and bedroom, created partly by converting loft storage.

'Being honest, I shouldn’t really have bought this house,’ admits Michael Beanland of the beautiful cottage, sandwiched between the rivers Alde and Deben on the Suffolk coastline, that he has called home for the past eight years.

Taking in the expanse of open countryside and golden light that bathes the characterful cottage, it’s hard to imagine why anyone would hesitate to buy it. But, as Michael explains, it has been a labour of love ever since.

‘It has cost a fortune to replace everything,’ he explains. ‘The house had previously been occupied by a DIY builder, and the interior was horrible – there was laminate flooring covering up the original floorboards, the existing staircase was dangerously steep, and there was barely a kitchen to speak of. So I designed a two-storey rear extension to create a new kitchen and bedroom above.’

Michael’s extension has made a vast difference to how the space works; there were originally just four rooms downstairs spanning off one corridor, and one large room upstairs that needed subdividing to create an ante room to give access to the bathroom from the new bedroom over the kitchen.

Rooflights now make the most of the gentle Suffolk light, and white-painted timber weatherboarding on the new extension helps it to blend in with the older part of the cottage. The old kitchen is now a bright, welcoming hallway, and only the living room remains as it was. ‘There’s not much left that’s original,’ he adds.

Yet Michael saw the potential he was looking for. Working in London, but having part-owned a cottage in the area with friends who had since married and moved on, he found himself still drawn to the eastern coastline and surrounding landscape. ‘It’s not in the fashionable part of Suffolk,’ he says, of the house originally built as
a smallholding for a nearby agricultural colony, and which later housed Home Office prison wardens.

Although, he adds, fashion designer Margaret Howell also has a place nearby. ‘It’s on the Sandlings peninsula, right on the edge of Suffolk and quite cut off. It’s mostly agricultural, but it’s a great place to get away from the city.’ Michael gets away as often as he can, travelling two hours from London a couple of times a week.

With the building work completed to his plans by local builder Ian Coote, he could start to think about interiors. The cottage’s calm, comfortable feel is at the heart of what makes it a perfect retreat from the bustle of London, so Michael chose a relaxed style of décor, with furniture and accessories sourced from antique shops in East Anglia and Yorkshire (where Michael is from originally), as well as from holidays in Wales.

'My inspiration for the house is Kettle’s Yard in Cambridge, crossed with the Bloomsbury Group,’ he explains. ‘Nothing cost very much; I’ve just collected things I like over the years. The most expensive piece is probably the little round Georgian side table in the living room. Otherwise, the kitchen table cost just £200, and had splashes of paint all over it. The Danish chair in the kitchen cost about the same, while the railway poster in the living room came from a junk shop in Wales.

‘It’s all about luck, and forever keeping your eyes open,’ believes Michael. ‘I can’t go past a junk shop without having a browse. I never wanted the kind of house where you have to put coasters down for guests’ drinks. I love people coming to stay and children running around.’

As for the structure and fabric of the house,  a local carpenter took care of much of the work that Michael couldn’t manage himself. ‘I really care about the details, so I knew that’s where I would spend the budget. For example, all the windows needed replacing, and the kitchen floor is made from reclaimed Cambridge brick that came from buildings on the Duke of Bedford’s estate. But I built the bookshelves in the living room, and painted the entire house myself.

With such a beautiful setting, and stunning open views, the outside space was as important to Michael as the house.

‘I’ve spent years getting the planting right,’ he says. ‘Along the way I’ve probably wasted thousands of pounds on plants that just couldn’t survive the lack of rainfall here. In the end, I relied on Beth Chatto’s book, The Dry Garden, and now my own dry garden is full of bronze fennel, Jerusalem sage, and golden oats – none of which need much water.  I really love their big stalks and the way they move in the coastal breeze.’

Despite, or maybe because of, the challenges of the environment, and the time and effort he put into renovating the house, Michael couldn’t be happier with the end result. ‘When I visited the house for the first time one February morning, I knew it would repay every effort.

‘I could tell that the cottage’s position here would mean it would be really beautiful all  year round. It has that big sky that is unique to the Suffolk coast – the light is what really makes it. It’s just two miles from the sea, and the beautiful rivers – they all reflect the light.'

'The sense of openness is wonderful and, whenever I’m here, I never want to leave. First thing in  the morning, when the sun is rising, or on a Sunday evening when the sun is setting, and the huge sky is hanging over the fields at the back, it is really hard to drive away.’