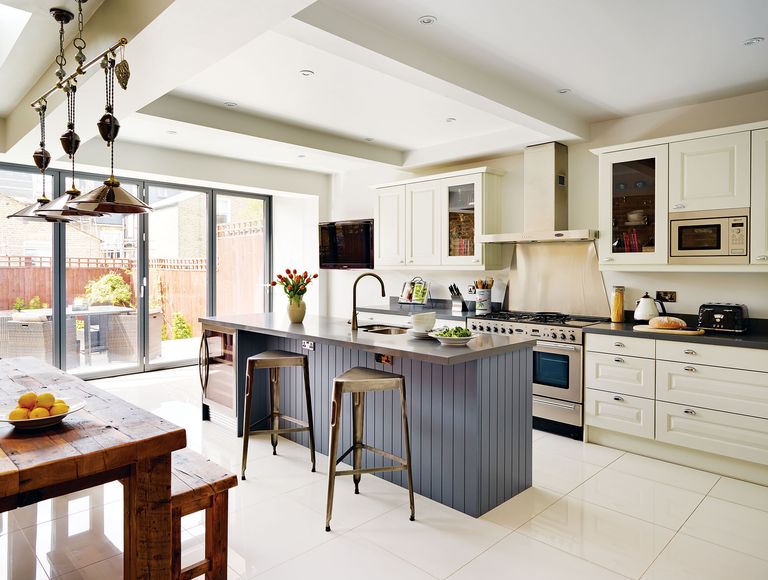 ‘Kerry and I had been living in a two-bedroom flat in south London for five years and planned to marry, so we wanted to find a home with enough space for a family,’ recalls James Lindsay of their search for a house.

‘There’s a shortage of family homes in this part of London, with a huge amount of buyers for every seller. We were outbid on several places before being lucky enough to buy this one.

‘It had been converted into two flats, so wasn’t an obvious choice, but we loved the area, which is between Wandsworth and Clapham Commons and has great shops and schools.’

Each flat was owned separately, but both were on the market, and the estate agent suggested that Kerry and James could convert them back into a terraced house.

The top one was in relatively good condition but the dated one-bedroom ground-floor flat, with a poky kitchen, was less appealing.

‘We bought them in April 2011 and moved into the top-floor apartment,’ says Kerry. ‘That’s when we started to consult different building companies about converting the loft and building a kitchen extension to add more space. A friend recommended design-and-build specialist Plus Rooms, and we liked the fact that the company had so much prior experience working with Victorian houses nearby. Its designers showed us various designs on their iPads, which helped us to visualise exactly what we wanted from the project.’

‘Every detail was carefully recorded, and we received a schedule breaking down all the costs and payments so that we were able to budget effectively,’ adds James.

Achieving planning permission for the extension and loft conversion proved to be relatively straightforward, because so many homes in the area had already been extended, and Wandsworth Council processed the planning application in just eight weeks. Work started in November 2011, with the builders beginning at the top of the house. At this time, the Lindsays moved into the ground-floor flat, where they lived for the next three months.

‘When work on the ground-floor flat started, we moved out and rented a property around the corner for eight weeks,’ explains Kerry. ‘We came back every day to see what was happening and then moved back in while the house was being finished off in May 2012, so the whole project took about a year.’

Double-glazed timber sliding-sash windows were installed, replicating the original single-glazed versions; a new timber front door was fitted; and the property was completely re-roofed in slate. While the front of the pretty brick house remains virtually unchanged, inside, the layout has been totally remodelled.

A partition wall between the old ground-floor living room and the neighbouring bedroom was removed, opening them up to create an airy double reception room with a bay window at the front of the house, now fitted with timber shutters. ‘The mouldings in here had been damaged, so a specialist company was employed to repair and replace the cornicing and ceiling roses,’ James recalls.The original floorboards were retained, first being stripped and treated before they were stained and varnished to a rich shade of brown. One of the open fireplaces is fully functional and the other is decorative, acting purely as a characterful focal point.

A tiny kitchen, the former dining room and WC were combined to create a spacious kitchen/dining/family room overlooking the garden at the rear, which opens onto a sun-trap terrace through glass bi-fold doors and was enlarged with a wrap-around extension on two sides. ‘It was a last-minute decision to remove the ground-floor toilet, but we felt that it made more sense to have a larger, regular-shaped kitchen,’ says Kerry.

New foundations were excavated for the extension, and internal and external walls were demolished to create the open-plan layout, which meant that the rear of the house had to be supported on a substantial skeleton of structural steelwork. This has become an interesting feature in the kitchen, where the steels are clad in plasterboard and painted white to blend into the rest of the room. Two frameless rooflights, inset into a flat roof, also filter natural light through to what was previously the side-return passageway.

‘We extended out about a metre into the garden and built across the side return, which really opened up the whole space,’ says James. ‘Part way through the project, the builders suggested that they could dig down further to create a higher ceiling in the kitchen. This required taller bi-fold doors, which also let in more light.’

The newly built external side wall has been left unplastered internally to create an exposed brick feature behind the kitchen table – introducing colour and texture to the predominantly white room. ‘We chose London stock bricks, and the blend of colours looks like an old garden wall,’ says Kerry. ‘There’s underfloor heating under the ceramic kitchen floor tiles, and the same white tiles are laid outside, but with a non-slip finish. Having a flush threshold and using the same style of floor tile inside and out makes the room feel even larger.’

Upstairs, the first-floor flat has also been totally reconfigured, with the former living room and bedroom combined to make a stunning master bedroom and luxurious en suite. Original floorboards were given a makeover, and a fireplace filled with logs to make an unusual focal point.

The family bathroom has stayed in the same position, but the old first-floor kitchen is now a guest bedroom, with a brick chimney breast exposed on one wall. A bedroom on the second floor, below the loft space, is now used as a home office, where the new central heating system is also housed. ‘We chose a Megaflo hot water system because it gives you equally high pressure in every room without the need for a cistern,’ says James.

The loft has been converted to add a further bedroom with a Juliet balcony and a sloping ceiling inset with two rooflights above the bed. Also in this space, an en suite shower room includes a recessed shower tray and a glass screen that help to visually maximise the space.

‘We enjoyed planning each room and then watching as it was transformed,’ says Kerry. ‘It was lovely to see the back of the cramped kitchens and dated bathrooms, and to watch the house coming back to life.’

The couple visited furniture fairs and shopped online to find quirky fixtures and fittings, and the result is a stylish home that has been beautifully furnished. Large mirrors reflect the light, and the mix of contemporary and traditional features brings the house up-to-date without it losing any of its charm. ‘We wanted to introduce character, and chose traditional features, such as the window shutters, fireplaces and stripped floors, to reflect the age of the house,’ James explains. ‘Using a design-and-build company really took the pressure off,’ he adds, ‘so we could enjoy the fun parts of the project.’