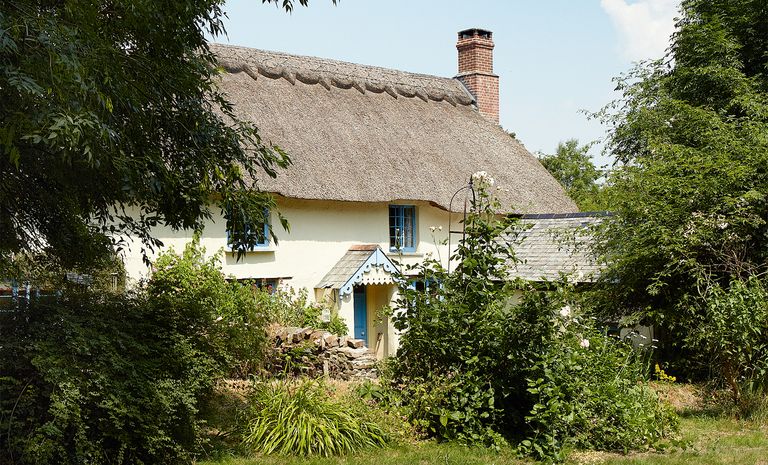 For centuries, cob has been used to build homes throughout the UK, especially in the south-west of England and Wales. One such house is Buckingham Farm — a thatched, 16th-century Devonshire longhouse bought by Suzi and Chris Carman.

Owners: Suzi works part-time as a web administrator and sells vintage finds online (daisyrootsvintage.co.uk); she lives with her husband Chris and their two cats, Hector and Hamish

Essential repairs: The walls were repaired throughout, a new heating system installed, new doors and flooringlaid and an oak extension added off the kitchen

Layout: There are four bedrooms, one with an en suite; the family bathroom is located downstairs

The property first appeared on the couple’s radar when they were visiting Chris’ family in West Devon.

Back then, their home was a farm in Sussex, where Chris has run a self-livery horse yard for over 30 years, and which he visits every other week. There, the couple had brought up their two daughters, Nikki and Heidi, but when the girls both relocated to Amsterdam, the couple felt it was the perfect time to make a change and move closer to their family and friends in Devon.

‘It was about a year on from first discovering the property that I saw it in my friend’s local newspaper, still for sale’, says Chris. ‘But it was being offered at a lower price — one that we could afford this time.’

The galley kitchen has plenty of storage, with units built by a local joiner and painted in Arsenic by Farrow & Ball, which complements Suzi’s collection of pink and red cookware

Suzi admits that they had a somewhat rose-tinted view of the property when they went to see it. ‘I can remember thinking that a lick of paint, and new carpets and curtains, would sort the house out — was I wrong! There was so much work to do that the only room fit to sleep in for the first two years after we bought it was the dining room.’

In the end, the longhouse proved to be an enormous hands-on renovation project that took more than a decade to complete. As well as the seemingly never-ending list of jobs to be done, the fact that both Suzi and Chris were working full time in another county, and Chris was often in another country, certainly didn’t help with the couple’s schedule.

Having a downstairs bathroom has allowed the Carmans to choose a reconditioned cast-iron roll-top bath, which took five men to lift. Sourced from an antiques dealer in Langport, Somerset, it has been painted in Green Ground by Farrow & Ball. Wallpaper by Jane Churchill and Fired Earth floor tiles complement it perfectly

One major priority in the renovation was warming up the chilly house. ‘There was no central heating in place when we moved in, so Chris had to install it throughout the house,’ says Suzi. ‘The thick cob walls now help to keep the heat in during winter.’ Chris also completely updated the plumbing and wiring, and replaced the rotten floors upstairs with new pine timbers.

Suzi ambitiously chose to wallpaper the undulating walls in the guest room, using a design by Nina Campbell. A homemade quilt adorns the bed, along with some of her pretty floral cushions. The table lamp’s shade was a gift, and the base is an upcycled junk-shop find

Suzi got stuck in, too, but sometimes felt that with one step forward, the renovation would move five steps back. ‘Every time I stripped off wallpaper in the bedrooms, some of the wall would fall away,’ she recalls.

‘Parts of the plaster behind it had been bodged with newspaper and a bit of filler, so the only thing holding it all in place was the wallpaper I was taking off. Fortunately, Chris has always been able to turn his hand to anything, so he stepped in to make everything good.’

Just off the kitchen, the garden-room extension is awash with dappled light thanks to a grapevine growing up and through it, giving the sense of sitting outside. An Ikea sofa alongside vintage enamelware on the windowsill adds a splash of colour to the pine flooring and furniture

Indeed, there was an awful lot to be ‘made good’, but happily, materials didn’t always blow the budget. All of the oak used for new doors, windows, and the library and living room bookshelves came from the farm in Sussex.

‘The big hurricane of 1987 was devastating,’ Chris recalls, ‘and we lost half a dozen huge oak trees that were on our land. At the time, we had them cut up and planked and left them to dry, not knowing that they would save us a fortune in timber when renovating this place.’

Green oak, meanwhile, was used for the extension — a timber-framed, vine-covered garden room. ‘Seasoned oak has no movement, while unseasoned green oak still has,’ explains Chris. ‘It is also easier to cut and manipulate, and as it dries it shrinks, which makes the joints tighten, increasing rigidity.’

A keen cook, Suzi likes to make sweet treats for husband Chris and their guests

Moving into the house also allowed Suzi to indulge in one of her biggest passions: shopping. ‘We sourced almost all the pieces for the house from scratch,’ she says, ‘except for my Victorian dressing table, which I brought from the house in Sussex. For me, the really fun part of the whole project was choosing furniture at auctions and antiques shops, and going to London to look for fabrics, paints and wallpapers.’

During the project Suzi even discovered a new knack for quilting. ‘I found a wonderful farm where they run workshops on flower-arranging but are predominantly into patchwork and quilting,’ she says. ‘The owner convinced me to have a go, and although I was sceptical at first, I quickly fell in love with the idea of using fabric to make beautiful art that is useful, too.’

‘The old drawers were from a friend of mine, Henrietta, who had an antiques shop in Okehampton,’ says Suzi. ‘It was her mother’s maid’s dressing table, so if I ever want to sell them I have to give her first option.’ The chair has been reupholstered in an Osborne & Little fabric, with cushions made by Suzi

Later, being at the house every day made the final push to finish the renovation much easier, and now the pair are happily ensconced in Devon life. Neither Chris nor Suzi ever sit idle, however — always planning a new enterprise, working in the flower and vegetable garden or thinking of the next home-improvement project.

‘I would like to knock down the wall between the kitchen and the garden room,’ says Suzi. ‘It would make it much lighter and I do like the idea of an open-plan space. But we both absolutely love the house as it is. We feel very privileged to live in such a beautiful, historic home and to be its caretakers for a short time in its long history.’